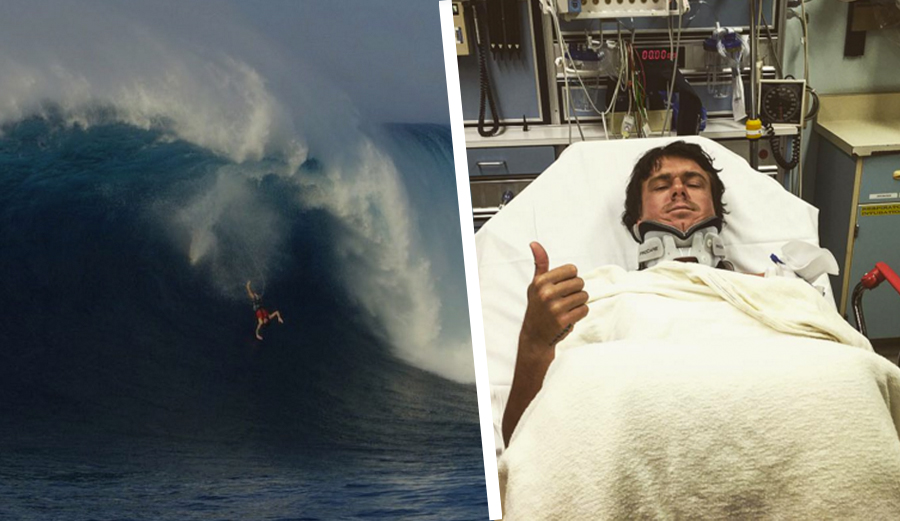 No broken bones, but a bit of muscle damage from Albee’s wipeout at Jaws. Photos: @acl_cinema / @johnjohn_slater

After a nasty wipeout at Jaws, Albee Layer landed in the hospital.

Once the call was made not to run the Quiksilver in Memory of Eddie Aikau at Waimea Bay, Albee stayed on Maui because he knew the swell would hit Pe’ahi later in the day. And sure enough, it did.

As if Jaws hasn’t done enough for the progression of big wave surfing already, yesterday took it to a whole new level. Shane Dorian got perhaps the best wave of the season (maybe ever?) with a massive tube. Check it out with the most appropriate song choice right here.

But Albee wasn’t so lucky. He took off on a bomb, got hung up on the lip, and didn’t stick the airdrop. The footage shows him cartwheeling down the face like a snowboarder on a snowy hill in a yardsale. The wipeout sent him to the hospital though it looks like he’ll be alright. Albee wrote:

So I’m alive and luckily no fractures in my neck or spine tons or muscle and other damage but nothing that will stop me from a quick recovery. I feel like jaws owes me one now. Really hope there’s a redemption swell before the year ends. Thanks to @kurtischongkee and the boys for keeping us safe. Till next time.

You can see the full wipeout below (it’s the first wave, can’t miss it):

When we caught up with Albee on Thursday morning, he said he was out of the hospital and “at home cruising.” While he was lucky not to suffer any muscle tears, he said the painful sprains he got from the beating will keep him in a neck brace for another day or two.

“I can recall mostly everything,” Layer told The Inertia contributor Kyveli Diener about the takedown. “I almost blacked out, but ultimately I was fine. I just hit a lot harder than ever before an in an awkward position.”

Here’s to a smooth recovery and seeing Albee out at Jaws again doing what he does best. Like this insane barrel from a few years back:

And be sure to check out our recent feature on Mr. Layer, This Is Albee Layer on the Eve of the Eddie.