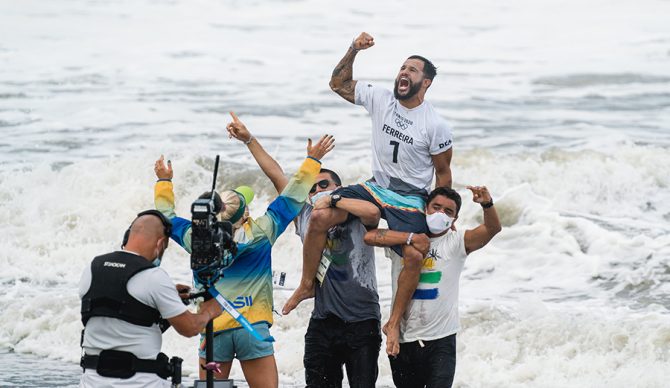 The Olympics have always been about swimming pools and track stadiums and baseball diamonds. Even boxing rings. But the ocean? Surfing was never supposed to be included amongst the floor routines and fencing. But here we are, where the waves were anything but perfect and the upsets were many, which may have actually made the whole thing better. In the end, Italo Ferreira and Carissa Moore became the first Olympic champions the sport has ever seen. And it was perfectly imperfect.

Ferreira was entertaining throughout but saved his best show for the final, where he pinned Kanoa Igarashi in combo early and never relented, putting the squeeze on the Japanese surfer with more rail turns than he employed the entire event, leaving Kanoa kicking his board and waving his arms in frustration. Italo began the celebration in earnest with a minute left in the final heat, embracing his Brazilian teammates and literally weeping with joy. His tactics changed mid-heat after he broke his board hitting a monstrous closeout section.

“I think it’s one of the best days of my life, for sure,” he told me after, shivering in his contest jersey. “I broke my good board that (I had confidence in and) gave me good speed on bottom turns and rotations in the air. The other board was more of a slow board and that’s what I changed to but I could get a couple turns. When I saw Kanoa not getting good waves, I decided to use that to create turns and finish on the closeouts because it was super hard out there but I knew there was opportunity in that.” 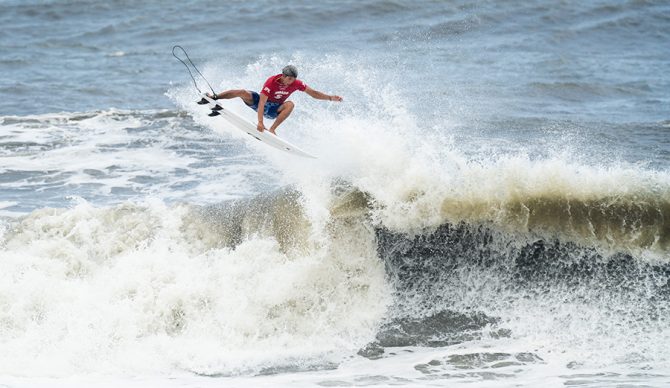 Kanoa, with the air that took down Medina. Photo: Pablo Jimenez/ISA

Despite his frustrations with the waves in the final (he could not find a scoreable section during the heat), Kanoa pulled off a magnificent upset of Gabriel Medina in the semifinal to earn silver with a beautiful air reverse in the nine-point range, attacking the Brazilian at his own game. Medina looked like the favorite throughout the entire event, which made the upset that much sweeter, especially to the non-objective Japanese media throng cheering wildly. “I had to dig deep in my bag,” he said. “He had a stranglehold on the heat. Any heat where your opponent has 16 points in the first ten minutes, you’re definitely in a sticky situation and I had to dig deep. It was super special to be here and feel the energy. It means a lot.”

Medina inexplicably faded on this last day, looking off in his final two heats, especially against Owen Wright, who beat the Brazilian for the bronze and Australia’s first Olympic medal. From my standpoint, this is the best Wright has looked since his perfect heats (two of em) in Fiji in 2015. He’s been battling back from a traumatic brain injury suffered at Pipeline that same year. I asked him that specifically. “Mate, I get chills when you ask questions like that, thank you,” he said about looking better than ever. “I’ve been on a crazy journey and haven’t been in great form for years. I’ve struggled with some bad symptoms behind the scenes of TBI recovery. My first diagnosis was it’s going to take 5-10 years to get back to my best and I’m six years in now and I feel like I’m just starting to show the form I’ve shown in the past.”

He seemed absolutely pumped about the rest of the CT season. 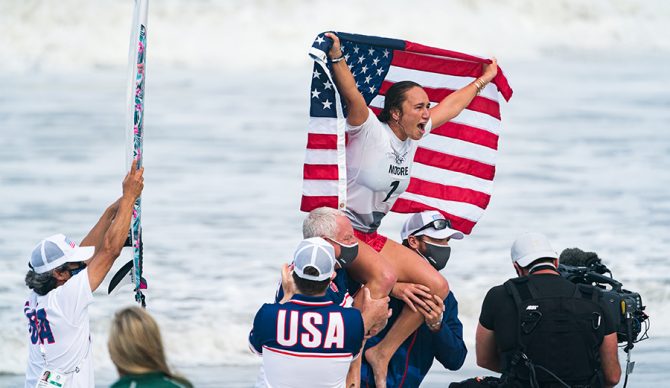 Carissa Moore completed a lifelong dream, which was more than evident on her face following the event as she burst into tears of joy on her final ride to the beach, raising her arms in triumph as she handily beat South Africa’s Bianca Buitendag in the final with her signature power game. The Hawaiian was able to pull magic from the discombobulated surf that was made more unruly throughout the day thanks to the wind and a giant rip running through the contest zone. After barely squeaking by  Japan’s Amuro Tsuzuki – who surfed with uncanny inspiration, taking out Caroline Marks in the bronze heat – Moore went to work in the final, bashing the wind-whipped lips with precision and an accuracy that had failed her earlier in the day. “This whole setup is huge and a bit overwhelming,” said Moore before the U.S. national anthem played as she stood atop the podium.

Buitendag surfed inspirationally herself, making an unprecedented run to the silver medal. Her backhand was as good as I’ve seen it given her years on the CT. She took out Marks in the semis before meeting Moore in the final. The South African announced that this would be her final competition. “This is my grand finale,” she said. “This is it. I’ve got lots of plans but I’ve enjoyed being the underdog. (This whole thing has been) unexplainable really. A lot of things have fallen into place and I don’t believe in luck so there must be some sort of plan here.”

If it was her final event, it was a fantastic way to go out.

In the early morning the waves were nearly epic (emphasis on “nearly”), with offshore winds grooming the smooth faces and plenty of tubes on offer, the brown water making it resemble the Outer Banks. But the conditions went wonky as the day wore on, with the sideshore wind not entirely ruining the surf, but coming close. Still, the ISA soldiered on with its plan, making history in the process.