Caroline Marks and Italo Ferreira Won on the Gold Coast; Both Are Going to Be World Champions In 2019 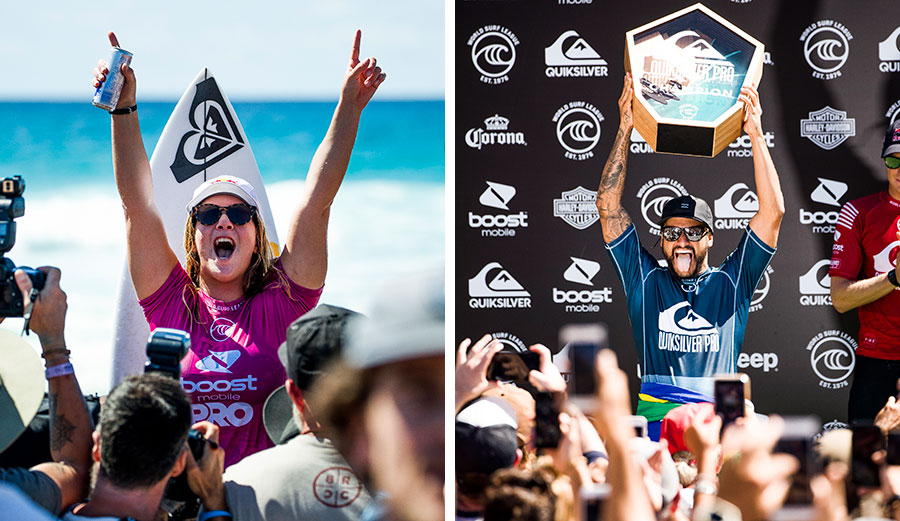 History has shown us that the winner of the opening event of the WSL Tour can be a harbinger of the next world champion, and Caroline Marks and Italo Ferreira are going to be the next examples of that phenomenon.

It’s pretty easy to see why, too.

Kickstarting world championship seasons with a win has become a thing: Medina did it in 2014, Slater in 2011 and 2008. Tyler Wright managed it in 2016, Carissa Moore did it in 2015 and 2011, and Stephanie Gilmore used the first event as a springboard in 2014, 2012, 2010, and 2009. Of course, there’s plenty more that goes into it — the world champion must maintain competitive dominance for nine months, but an early win is mental too: it sets a competitor’s frame of mind for the pace they’re going to keep the entire season.

Yes, there are plenty of examples where the winner of the Gold Coast event didn’t go on to win the championship trophy (2016 Wilko, anyone?), but this year… oh, 2019. The year Caroline Marks and Italo Ferreira do it.

First, Caroline Marks, the little upstart from Florida, the underdog, inexperienced, beater of Gilmore and Moore. A giant slayer, and the first woman on the Championship Tour to win a paycheck that is finally, finally equal to the men’s. Caroline Marks, the teenaged phenom who will almost undoubtedly become a World Champion. This year.

Marks burst onto the scene with much fanfare. To anyone watching, her trajectory was obvious — at the age of 11, she won the Girls’ U16, U14, and U12 categories at the 2013 Atlantic Surfing Federation Championships. When she was 13, she competed on the CT as a wild card against Carissa Moore at Trestles. She won the U.S. Open Pro Junior in 2016 and the NSSA National Title in 2017.

If you’re a surfer from the contiguous United States, Florida is the place to be from. Consider this: In the last 30 years, every American champ from the contiguous United States on the women’s side has been from Florida. For what it’s worth, Tom Curren’s win in 1990 is the last time in those 30 years a non-Floridian mainlander was crowned world champ.

At just 16, Marks officially became the youngest person to ever qualify for the WCT, pulling it off in just three years — and it wasn’t even the first sport that involved chasing barrels she was good at.

“Believe it or not, she used to be a Texas barrel racer on a horse,” her father Darren remembered in the WSL’s rookie profile. “That’s all she did was go to competitions. She didn’t want to surf at all.”

That’s just a tribute to Marks’ athleticism because her surfing has come a long way in a short time. Competitively, she’s blessed with an ingrained wave knowledge and powerful backhand of someone twice her age. Her headspace seems like an interesting mix of “I’m-still-in-awe-of-where-I’m-at,” and “I-ain’t-scared-I-can-beat-anyone.” It’s a frightening fusion of skills if you’re trying to compete against her. On the way to her Boost Mobile Pro Gold Coast win, she took out Carissa Moore, Stephanie Gilmore, Malia Manuel, and Sally Fitzgibbons. Veteran surfers who’ve had decorated careers on the CT. Marks, at the tender age of 17, managed to beat them on surfing’s biggest stage with a kind of casual ease that she shouldn’t yet have. Think Slater or Gilmore. Marks has that same confident glimmer in her eyes.

And Italo Ferreira. If you’ve been keeping an eye on him for the last few months, it’s obvious that he’s shifted gears. At the Gold Coast event, Ferreira was on a different level — and despite cries from the internet that “KOLOHE WAS ROBBED,” Ferreira was in a form we haven’t seen before. That Brazilian passion that everyone talks about was never more obvious. From the first horn, Italo seemed to have a different energy about him.

While Kolohe — and every surfer on tour, for that matter — works extraordinarily hard, Ferreira just has a little something extra. He wasn’t the “next-big-thing.” He wasn’t the son of a famous surfer and he didn’t have a Target sticker plastered to his board. He didn’t grow up on the North Shore or the Gold Coast. In the words of Jamie Tierney, “he grew up never once thinking of a backup plan. No preheat psych-outs or trash talking throws off a man who’s had a gun to his head, forced to give up something he’d worked hard to earn.” (Check out the story of Italo being carjacked, BTW). He surfs like a man possessed, spinning off non-existent ramps, going so fast it seems as if he’s just let go of a rope, squeezing the juiciest points out of the driest of waves.

Italo is like someone who grew up working on a farm. Back-breaking work isn’t back-breaking if it’s what you grew up doing. He knows what it takes to get the job done. To him, there is no other option. It seems almost no one on tour would be more devasted if he doesn’t come away on top. Italo pulled off a pair of wins this weekend (Red Bull Airborne, too), riling up the crowd, doing impossible things in the air. And like every world champion before him, had a magical run where he was an absolute wave magnet.

Bookmark this page so you can say mean things to me later, but let it be known that I’m on record:  Caroline Marks and Italo Ferreira are going to hoist surfing’s grandest trophy over their heads — and they’re going to do it this year.