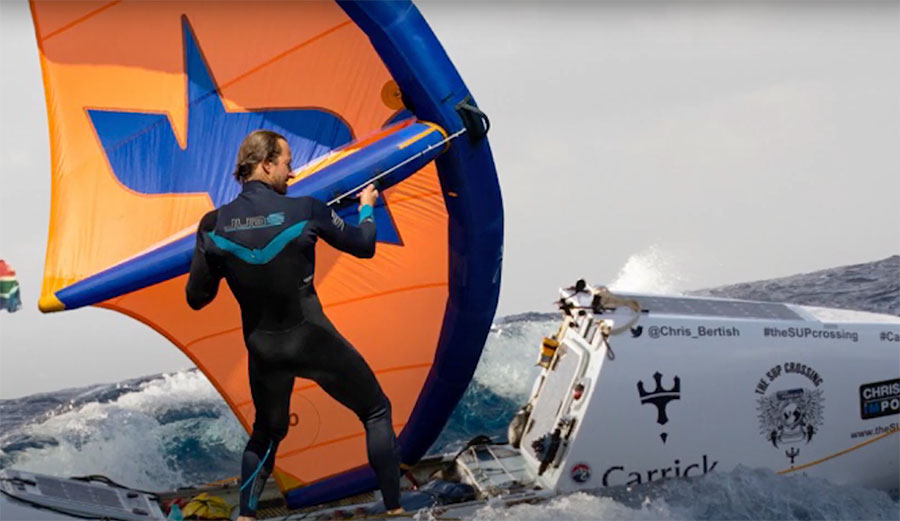 Chris Bertish, Mavericks Big Wave Invitational champion, proud owner of three stand-up paddle world records, and the guy who paddled over 4,000 miles across the Atlantic Ocean, has a wild new goal: he’s going to attempt to cross the Pacific on a wing foil. That’s 2,850 miles across the Pacific Ocean from Half Moon Bay, California to Oahu, Hawaii. Obviously, it’ll be the first attempt of its kind, because only someone like Chris Bertish would even consider it.

“The journey will require Bertish to complete the equivalent of more than two full marathons per day,” a press release reads, “winging a minimum of 8-12 hours per day, for over fifty days, unsupported and completely unassisted.”

Back in 2017, Bertish completed a transatlantic crossing on a modified paddleboard called the Impifish. It was custom built for the journey, with all sorts of modification and a hull so he could sleep below deck. He’ll be using the same craft for this crossing, but with a few extra bells and whistles. The team is adding purpose-built hydrofoils, advanced satellite communication systems, radar, GPS technology, and multiple-sized powerful wings, among other things

“It’s very unique,” he told The Inertia about the craft in 2017, a few months after completing his journey. “There’s nothing like it that really exists on the planet. It was designed for one goal and one goal only: to get me across the Atlantic Ocean in one piece.” And now it’s being redesigned to get him across the Pacific, too.

Like his previous undertaking, the Trans-Pacific crossing will support education, conservation, and sustainability. “This is a perfect time to remind ourselves and the world that we are all far stronger and more resilient than we realize,” Bertish said. “Not only can we navigate the change and the challenges of this pandemic, but we can all accomplish anything we set our minds to.”

The project, which will raise funds for organizations including Operation Smile, Conservation International, and multiple ocean education and sustainability programs, kicks off in June of 2021, and as you might expect, it ain’t cheap. The craft, with upgrades, insurance, and the cost of shipping from the U.K. to the U.S, is going to be over $95,000. “I’ve already invested a significant amount of my own personal finances into the project,” Bertish wrote on a crowdfunding campaign, “and a couple of really amazing friends have chipped in too, but until we get some bigger sponsors on board, we are short $55 000.00 USD.”

Part of that expense is going towards satellite communication systems that will allow him to do live interviews in real-time from the middle of the Pacific ocean. The entire journey is carbon neutral — from the moment Bertish leaves Half Moon Bay, zero fossil fuel will be used. Only organic, biodegradable waste will be allowed back into the environment, and according to the press release, through their carbon offset strategy, they will plant multiple forests through the Heyerdahl Climate Change Park in Myanmar, for which Bertish is an ambassador.

“In everything I do,” Bertish explained, “I try and create awareness and give back to the five cornerstones of the Chris Bertish Foundation and my I’MPossible brand: People, Planet, Education, Inspiration, and Sustainability.”

To support and learn more about the TransPac Wing Project, click here.