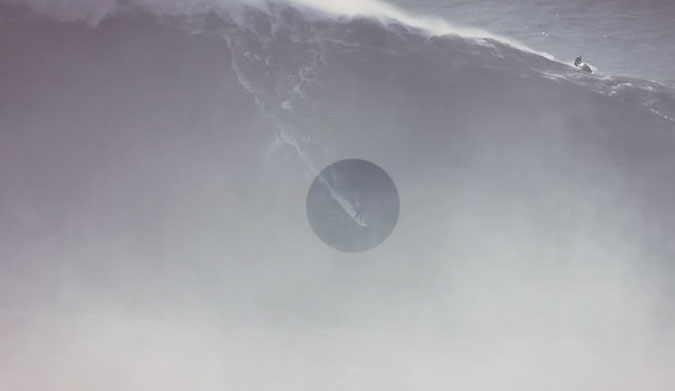 Benjamin Sanchis on what could very well be the biggest wave ever surfed.

When it comes to big wave surfing, Nazaré falls into a different category than most spots. Frequently discounted as a “real” big wave break, Praia do Norte has been the center of debate since the world sat up and took notice of it as a big wave destination. But it seems to be the only place on the planet capable of producing big wave surfing’s Holy Grail: a rideable 100-foot wave.

On December 11th, Benjamin Sanchis might’ve found that Grail. Early reports are calling his wave an astounding 108-feet, and many non-surf publications are claiming it’s a confirmed world record, which confused me. “Surely,” I thought, “this would have made the rounds in the surf world.” But it hadn’t. The surf world’s way too radical for something like this. It happened a few years back to G-Mac, too. Eerie silence in surf while Anderson Cooper sings it from the rooftops. So I called the Guinness New York offices, just to clear the matter up.

“No, we don’t have it on record,” a representative told me over the phone. “We usually defer to a governing body for that.” So I wrote a quick email to Bill Sharp, the Event Director/Big Wave Aficionado over at the XXL Big Wave Awards, the governing body. Turns out they’re still deliberating, and will be for quite some time.

“For this year,” Sharp answered, “no decisions will be announced until the XXL Big Wave Awards take place on May 1, 2015.” But just because the verdict has been postponed, the news that Benjamin Sanchis quite possibly smashed the elusive 100-foot marker is still, well, newsworthy. So why the silence? Well, there are a few reasons.

For starters, the tow-movement is dead and buried. It began its slow decline shortly after Laird’s Millenium Wave, and quietly made its exit a few years later. It’s still twitching in a few places around the world, but for the most part, paddling is all the rage again. The fact remains, though, that tow-assisted surfers will always be able to ride bigger waves than paddle surfers. Praia do Norte, on its biggest days, is much too large to paddle. The second reason, which is perhaps the most easily disputed, is that the wave at Nazaré isn’t steep enough to be real wave.

Surfing Magazine‘s Taylor Paul wrote of Nazare, “The wave that sometimes isn’t a wave because a wave has a crest and a trough, and Nazaré often lacks the latter.” But no matter your opinion on what a wave actually is, it’s irrefutable that the moving mountains of water at Nazaré’s North Canyon are huge.

“The thing about Nazaré,” Garrett McNamara told me, “is that you can’t fully appreciate it until you experience it for yourself, either out in the water or on the cliff. I just laugh when I hear people talk about it and they’ve never been there. It is the best place in the world to watch and feel the energy of massive waves… everyone should put it on their bucket list to come and check it out.”

Whether or not you think that the wave at Nazaré is a “real” wave, though, there is no denying that it is very, very heavy. Even Shane Dorian, the leader of the paddle-in pack, had a few choice words to say about the spot after one session in 2013. “As far as intensity and power and size goes… it’s like anywhere–Cortes Bank or Jaws or Maverick’s,” he said. “The waves I saw today were absolutely enormous. There’s no doubt if you were to have paddled into the biggest wave of the day that it would’ve been the biggest wave ever paddled into.”

Officially, Garrett McNamara still holds the Guinness World Record for surfing the tallest wave ever. Back in 2012, Gmac rode a wave of such monstrous proportions that surfing, for a few weeks, made international headlines. His 78-footer at Nazaré kicked Mike Parsons off the throne and poured gasoline on the fiery debate of whether or not Praia do Norte should be counted as a real wave. When Garrett broke the world record, it caused a stir. Many pulled out their own version of a measuring stick. The tangled cobwebs of the Internet were bogged down with naysayers and yaysayers, all screaming at each other. But some reason, the surf community has been strangely quiet when it comes to Sanchis’ wave, which, at first glance, looks to be the largest wave (or whatever you want to call it) anyone’s ridden using a surfboard.

“The Benjamin Sanchis wave is an interesting case,” Bill Sharp said. “Unofficially, it could very well be the biggest wave ever attempted.” But there’s an issue with Benjamin’s wave, and it’s got nothing to do with the location or how he got into it. One of the rules for the XXL Biggest Wave Award is that the rider must complete the “meaningful portion of the wave” for it to be considered a successful ride. And Sanchis fell on his wave.”The basis of this was to not ever encourage a surfer to take off on a wave where he has zero chance of making it only because he wanted to set a record… that would be fully inappropriate,” said Sharp. “It would idiotic to encourage someone who is a total kook to try to go on a 200-foot closeout he has no chance of surviving and will get a posthumous award.”

Which starts an interesting conversation. Should the sole act of the attempt be rewarded as well? “One thing to ponder,” Sharp wondered, “is whether Guinness and/or the surfing community would support a new official category for something like ‘Biggest Wave Wipeout’ or ‘Biggest Wave Attempted.'” There is a certain merit that goes along with eating shit on what might be the biggest wave ever surfed, after all. Without those wipeouts, the makes would never happen–you don’t learn to ride a bull without falling off a few times. “Sancho is a skilled, dedicated big wave rider who went for it when he had the chance and made it really far on an unprecedented wave, but got smacked in the end,” said Sharp. “He got beat bad but came out of it okay. Does he deserve to be celebrated? Or somehow scorned for going for it?”

But in the eyes of many, the wave that Sanchis took off one was the biggest wave ever surfed. “If Benjamin had managed to stay on for another few seconds and clear the section that landed on him,” Sharp elaborated, “it would have been a success by definition. That is my unofficial view at this point, and additional judges will weigh in on the level of successfulness prior to the nominees being announced in late March.”

And whatever the final verdict is, people like Benjamin Sanchis and Garrett McNamara are pushing limits of what’s possible on a surfboard, just like guys like Greg Noll were doing back in surfing’s teenage years. “That wave really reminds me of Greg Noll’s epic third reef Pipe wave back in the 1960s,” Sharp wrote. “Da Bull rode what was an unthinkably deadly monster for the time, and ate it in almost the same fashion. It’s still remembered as one of the most legendary rides in surfing history some 50 years later, whether it’s in the record books or not.”

Time will tell whether Benjamin Sanchis actually broke the 100-foot on that day in December. But whether he did or not, there is no doubt that the waves at Praia do Norte are indeed “real” waves. They’re real and they’re dangerous, and to discount the wave is to discount the people who put their lives on the line surfing there.

Below is the wave in question–it is undoubtedly gigantic.