DNA: The Philosophies and Stories of Shaping in the Aipa Bloodline 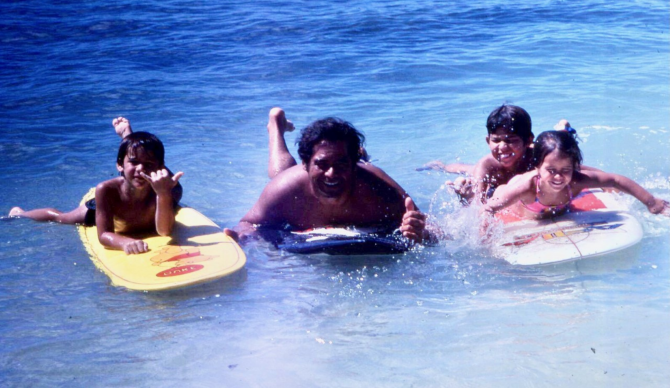 Spending any amount of time talking to Duke and Akila Aipa brings on one very, very obvious observation: the two sons of legendary shaper Ben Aipa are nothing alike. The beautiful and fascinating thing about it is both say (in their own ways) if you folded their respective personas into one person you’d end up with…their dad.

Akila is contemplative. He shares each story as if his next word is precisely the best and only way to articulate his thoughts. Duke is boisterous and energetic. Jovial is a word that hits the mark. Odds are he’ll punctuate his very next sentence with a laugh.

“I love being told that we’re different,” the elder Akila says. “I think we shine in different ways.”

It all adds poetry to the fact that a year after Ben Aipa’s passing the two have collaborated to release a surfboard together for the first time. It’s an homage to their father, blending their own unique creative styles with what he taught them individually, all the while reinventing the very shape that made the Aipa name synonymous with progressive surfing 50 years ago — the Aipa Sting. They appropriately named this one the DNA. And hearing each talk about the new board, their work together creating it — something they’re doing for the first time ever — and the family history built into this project is like getting a history lesson in all things surf royalty.

Dimensions, top-level design chatter, and performance are cool and all. But as Duke himself would say, the why behind making a board like this is as impactful as anything else. 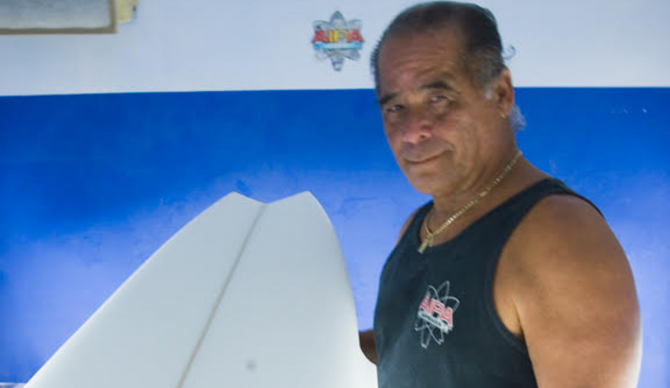 “We’re putting the best parts of us in it.” -Duke Aipa

If you were to write a history text on progression in surfing and board design, you couldn’t do it without telling the story of Ben Aipa’s Sting.

Inspired by watching a hydroplane speed boat in Hawaii one afternoon, Ben Aipa noticed the boat accelerated through turns with a massive release of water coming from the cutout section of its stern. He wanted to see what that same design would do for a surfboard so he rushed back to his shaping room, grabbed a fresh blank for what was supposed to be a swallowtail, and carved an entirely new outline into the last third of the board.

Like many brilliant things in surf design, an iconic shape was born with a flash of inspiration and an artist who got right to work. He didn’t stop until that first board was done. The reduced area in the tail put a whole new twist on turning response, and Buttons Kaluhiokalani carving a 360 on one of Ben’s earliest Sting models quickly became as iconic an image as the board itself. It had opened up a whole new world in performance surfing.

Almost 50 years later, his sons set out to give the classic shape a modern twist.

First, to fully appreciate the road that brought Duke and Akila Aipa together to design a modern version of their father’s work it helps to learn how their lives took wildly different paths as young adults. The Aipa family name technically represents different brands today. AIPA Surf is the brand Ben started and eventually passed on to Duke. Akila Aipa Surfboards was started by Akila after years of apprenticeship under his father, branching out and exploring his own designs.

At first, Akila picked up shaping as a teen simply to avoid boredom. He’d arrive at Ben’s factory after school and wait until his father was done working so they could surf together. And some days that wait was longer than others. One day, Ben Aipa’s oldest son just jumped into an empty shaping room simply to occupy himself and never looked back.

“I ended up riding it, traveling, competing on it, and breaking it at Pascuales in Mexico,” he says of the first board he crafted out of that boredom. The infatuation with it all ever since has been his singular focus for 35 years now. It’s something he’ll never get bored with. 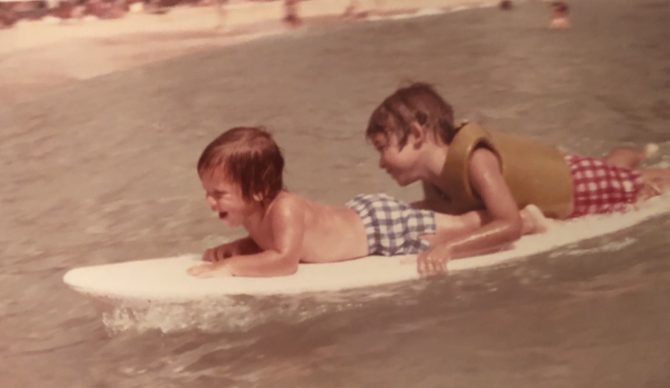 “You gotta imagine if your dad builds cars you’re gonna noodle around with his wrenches.” The Aipa brothers, where it all started. Photo: Aipa family

“We’re building three-dimensional subtractive art that interacts with the ocean and a human,” he says. “That’s a Rubik’s cube. Most artists just gotta paint some shit and hopefully it appeals to someone. Can you imagine if they have to go ride that in the ocean?”

“You gotta imagine if your dad builds cars you’re gonna noodle around with his wrenches,” he says. “It (shaping boards) was never one definitive starting point. It just was.”

But teenage Duke Aipa had no ambitions to shape surfboards for a living.

“Bro I grew my hair out, dreads, everything,” he laughs. “Couldn’t get away from it. Ran as far as I could.”

He really did run. And he really did show me a picture of those dreads. Imagine Zack de la Rocha in peak Rage Against the Machine form and that’s Duke Aipa in the 1990s, living on the mainland’s East Coast as the front man of a rock band. It sounds like a different lifetime the more stories he shares about it. And it seems like that was exactly the plan for a period of time.

“Growing up and having people treat him (dad) like Elvis was annoying,” he admits. Duke was a young man looking for his own identity, so pursuing something entirely different from his father and older brother wasn’t far-fetched. But mixed in with all of Duke Aipa’s stories about pursuing a music career 5,000 miles away from home are heartfelt stories of his roots. “Running away” wasn’t in the books for the long haul.

“I had Buttons as my babysitter,” he chuckles. “There’s a shot of a surfer from 1890 with an Alaia behind him — that’s my great great grandfather. That’s our proof that board building has been in our bloodline.”

You instantly know the image before you even see it. You already have a thousand times. We all have. It’s a one-of-a-kind way to describe some deep, deep family roots.

“Every board’s a tribute to dad. I wouldn’t be where I’m at and have the technical foundation of shaping without him and neither would my brother,“ Akila says.

Ben passed the business on to Duke in 2013, and with that he was given his dad’s blessing to build his trademark AIPA Surf designs. Akila had established his own business long before this and for years he would push potential customers to his father, never wanting confusion between his designs and his fathers.

“I wanted them to have the authentic experience with him.”

That authentic experience was a very personal one, from the sounds of it. Ben Aipa held the surfers he made boards for in high esteem, something he passed onto his sons who stress the same today.

“It’s ancestral. It’s tradition,” Duke says of shaping. His older brother says building boards is an act of service. But no matter how they put it, both men derive a strong sense of purpose from building surfboards.

“Dad honored and respected your everyday surfer just as much as the pro,” Akila says. “Everyone else was not discredited because they needed the benefits of those designs more than the pros. Pros are talented. They can ride a door.”

He proudly shares how those people covered the walls in Ben Aipa’s shaping room and draws comparisons to the success and influence Jake Burton had on snowboarding — another business mentor Akila gives credit to. In both bodies of life’s work, it was all about honoring the riders. They were Ben’s inspiration, and the entire surfer-shaper relationship and the feedback experience is something the Aipa brothers now talk about with passion. Even something as simple as having your own name written onto a board was one Ben made special, Duke says.

“I can’t tell you how many stories I’ve heard about boards my dad’s made. Especially when he passed — boy did they came out of the woodwork.”

Appropriately, it was Ben Aipa’s passing and the August 2021 memorial paddle out in Hawaii that gave the brothers a wave of these stories and a spark to finally work together.

Like Ben Aipa’s flood of inspiration turning into The Sting overnight, Duke and Akila shaped their first collaboration together in a flash. The objective was to pay tribute to their father by modernizing The Sting and in true 21st-century fashion, they bounced ideas back and forth virtually. Duke would send a template to Akila and Akila would tweak it before sending it right back. Duke would tweak and send it back. Rinse and repeat until they had refined a version that started to feel right. 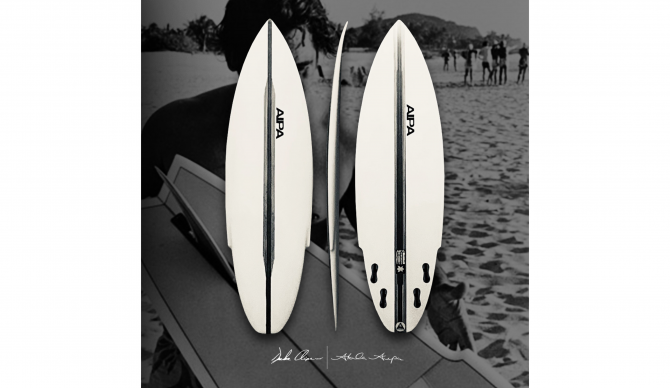 “Aside from doing something with my dad, I’ve never done that with anyone before. There was a degree of ‘I really want that vee to be higher or the concaves to be deeper but…ok,'” Duke jokes.

Then he relates the experience to something else near and dear to him.

“It was almost like writing a song with a band.”

As kids, Duke says his older brother would take on older brother tasks like helping with projects and helping put stickers on his boards. And here they were decades later bonding in the same way over an art their father passed on.

“It’s still kinda like that today. I’ll always look up to my big brother. Especially in shaping and designing. He’s brilliant. Fortunately, we both get the ingredients from our dad. Some of the end results are similar but the execution is radically different.”

Both brothers agree their individual personalities come out in their shapes. Even when their templates appear identical, flip their boards over and you’ll find something radically different. Duke’s with aggressive bottom contours, Akila’s clean and more refined. Somewhere on each you’ll find Ben Aipa’s fingerprints  — the one who laid the foundation for them both.

“We always wanted to honor that design, maybe modernize it,” Akila says. “My thoughts are can we put the concave in the right place, find the right set up — a happy medium between old school single fin and new school freedom?”

The design sat as an idea for some time. Then, when practically all of Hawaii showed up for Ben Aipa’s memorial paddle out last summer, they agreed it was time to make it a reality. Duke equates it to a phoenix rising from his father’s ashes.

“We’re putting the best parts of us into it.” 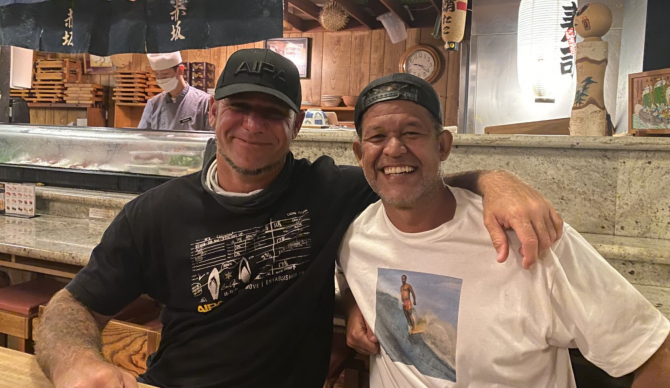