Does Negative Self-Talk Keep You From Being a Better Surfer? 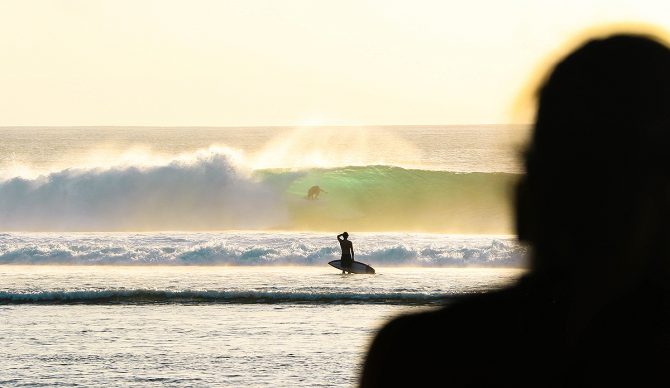 A huge part of surfing at your optimal level of performance is turning off your negative self-talk. The thoughts in our head influence our behavior, attitude, and actions in every walk of life. They are either empowering and enable us to take positive actions or limiting and stop us from achieving our goals.

Surfers can often be facing situations where they are talking negatively to themselves, especially before and during a competition, surfing big waves, or on a day when conditions aren’t all that great. In competition, thinking you might lose against your opponent can be the leading cause of actually failing to win. On a big day where your limits might be pushed, letting fear get into your thoughts can cause you to hesitate and not taking quick actions.

The reason our thoughts are so important for us to understand is that they are directly responsible for the results we get. The way we think determines how we will be acting in any given situation and the way we act makes a huge difference in our results.

Identifying Negative Self Talk
Having this in mind, what is the negative self-talk that could hinder you from surfing at an optimal performance level? What are the things you say to yourself that have stopped you and could still hold you from performing at your best?

Here are some examples:

-I am not equipped to be an optimal performer.
-I have no time for this.
-It’s too hard, this isn’t for me, and I can’t do it.
-Optimal performance is for professional surfers (aka other people).
-It’s too late for me. I am already too busy with life.
-I have already tried everything.
-I am never going to be disciplined enough.
-I don’t need to be an optimal performer so I’m not going to strive for performance.
-My lifestyle is too complicated. I wouldn’t be able to do it.

Unconscious Childhood Relation
Some of your negative self-talk could be coming from beliefs that were installed in you by the people closest to you. You continued developing and confirming those beliefs as your own while growing up as a teenager and then into a young adult, and you chased evidence to support these adsorbed beliefs.

Some of your beliefs could be operating below your conscious awareness, much like an airplane on autopilot. However, understanding how the human brain works and how to make changes can unlock your hidden potential.

Changing the Way You Think
All breakthroughs begin with a change in beliefs. So how do you turn your limitations into empowering actions?

1. Recognize and write down at least five limiting beliefs about being at an optimal performance level, waking up early, and being a better stronger and healthier surfer.

2. Come up with the opposite of each one of your limiting beliefs. Start using your new beliefs as positive self-talk. Reframe it and start repeating it over and over again.

3. Create a short-term and mid-term plan where you can integrate your new positive self-talk into your OPP (Optimal Performance Practices), and to reinforce these through your morning routines.

4. Stay focused and keep repeating this sentence and the action that follows it, until you feel completely free from the old habit.

In Summary:
-Your thoughts influence your behavior and therefore your results.
-Some of your unconscious beliefs were developed during your childhood.
-Turn your limitations into empowering actions by repeating the opposite of them.

Editor’s Note: Dris Mi is a sports mental performance coach and contributor to The Inertia whose work we’re really stoked on. He’s dedicated himself to sharing insights and philosophies on the mindset that will help every surfer reach their highest potential and we really love that.

So if you’re one of those surfers looking to become a better all-around slider of waves, take some time to check out pieces from his optimal performance series covering things like steps to waking up earlier and more here.