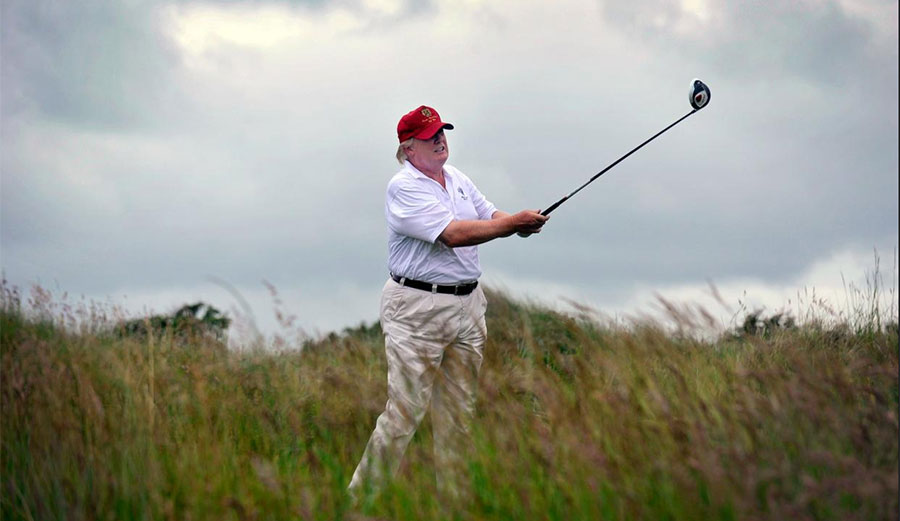 “I am a tremendous golfer. Really, really tremendous. Everyone knows it. Tremendous!” Photo: Irish Examiner

Before Donald Trump became the leader of the free world (no, it’s still not Angela Merkel), he had a lot of plans. As he’s made so clear, he loves to build things–gold buildings, failed casinos, and of course, tall walls. You may remember the wall (no, not THAT wall) that he wanted to build because of a petition that made the rounds in the surfing community. Basically, he wanted to build a wall to protect a golf course, and everyone blew their tops. The proposal was dropped, everyone patted themselves on the back, and it was score one for the good guy. But wait! He’s back! He’s back with more wall!

So here’s the back story: A few years ago, in 2014, Trump bought a golf course in County Clare, Ireland. “It’s incredibly beautiful and also happens to have a handful of really good waves,” I wrote back in April. “Because Trump decided to buy a golf course basically on the sand, which seems like a bad idea (“…a foolish man who built his house on sand,” said the Bible), and shows staggeringly terrible foresight for a man in construction, natural erosion is kind of messing it up. So of course, he wants to fix the problem by–you guessed it–building a wall. A very big one. Made from 200,000 tons of boulders, the wall would stretch nearly 2 miles along Doughmore’s sand beach. At almost 20 feet high and 100 feet wide, it will destroy a vast portion of beach and a few of those really good waves.”

It wasn’t long before a petition circulated around, garnering over 100,000 signatures. Trump’s Irish business, though, decided to try their hand at hardball. “Trump is threatening to close the facility and lay off people if he doesn’t get his way,” Wayne, an admin from the Save Doughmore Facebook page, told MSW. “These are scary threats, there’s no question of that. The fear of our friends and neighbors losing work is very scary, and let me reiterate we are in no way trying to close the hotel and golf course, we are just asking for some ethical business practices and some sound environment practices. The permanent destruction of a beach can never be the correct, moral and sane choice.”

Unlike most petitions, this one actually worked. After months of pressure, it looked as though Trump International Golf Links gave up. “Trump’s decision to walk away from the seawall proposal is a huge milestone for the #NatureTrumpsWalls campaign and we are very excited by this decision,” said Nick Mucha, Save the Waves’ Program Director. “We are proud to have brought worldwide attention to this issue and save Doughmore Beach from their ill-conceived proposal. Our work continues as they consider scaled-back measures, but we are excited to spare Doughmore Beach of the monstrous seawall proposal.”

Well, it turns out that those “scaled back measures” are still pretty damn big. The new proposal calls for nearly 40,000 tons of rocks, which is still a LOT of rocks. Oh, the outrage!

When the Donald became President, he resigned as director of the Trump Doonbeg resort, but, in a staggering conflict of interest, his children, Ivanka, Donald Jr, and Eric, remain directors. Their new proposal is a smaller version of the previous one, and it involves 38,000 tons of rock to safeguard course holes 1, 9 and 18. Surprise, though… people still hate it.

The Irish Surfing Association and the West Coast Surf Club lodged objections because they claim the wall will ruin Doughmore Beach. The general consensus seems to be that moving parts of the golf club inland, away from the coastal erosion zone, makes more sense. Foolish man building a house on sand, and all that. 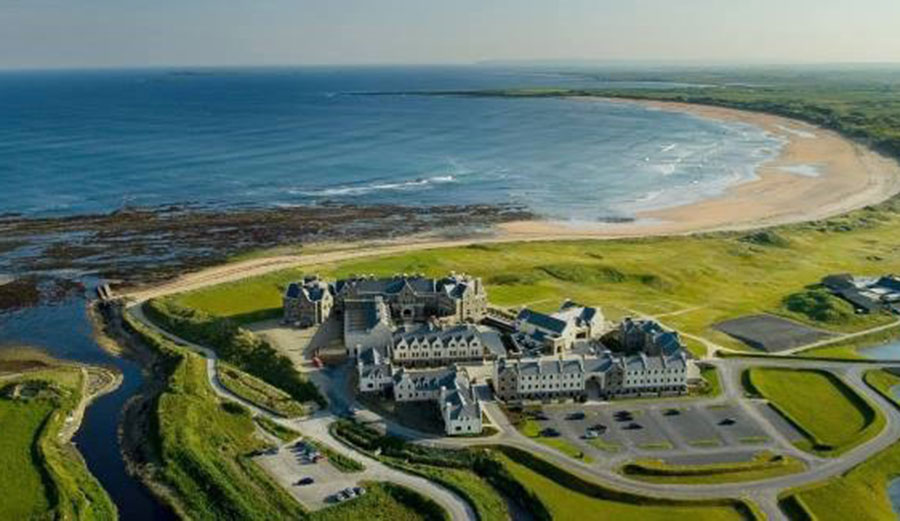 “That such a simple solution could be ignored in favor of the monstrous damage they propose to do to our beach is simply impossible to understand,” said Laura Hogan, a County Clare local, in an objection submitted to the County Clare Planning Department. “We are fortunate to have this spectacular beach on our doorstep and the thousands of walkers, joggers, and surfers who use this beach every year deserve to have their interests protected.”

The surf clubs are worried about the waves, as well. The Irish Surfing Association is objecting “on the grounds of the expected long-term damage to the surf environment due to resulting changes to beach profile which will follow the introduction of these coastal protection works.”

“It would be a shame that this area be destroyed by this construction,” a surfer named Rory Breen told the council at a meeting. “I am prepared to do everything it takes to avert having this placed on the public beach and dunes.”

We don’t have long to wait before we find out what’s going to happen. The decision will be made before the end of February, but it seems likely that the smaller version of Trump’s Irish wall will go through.