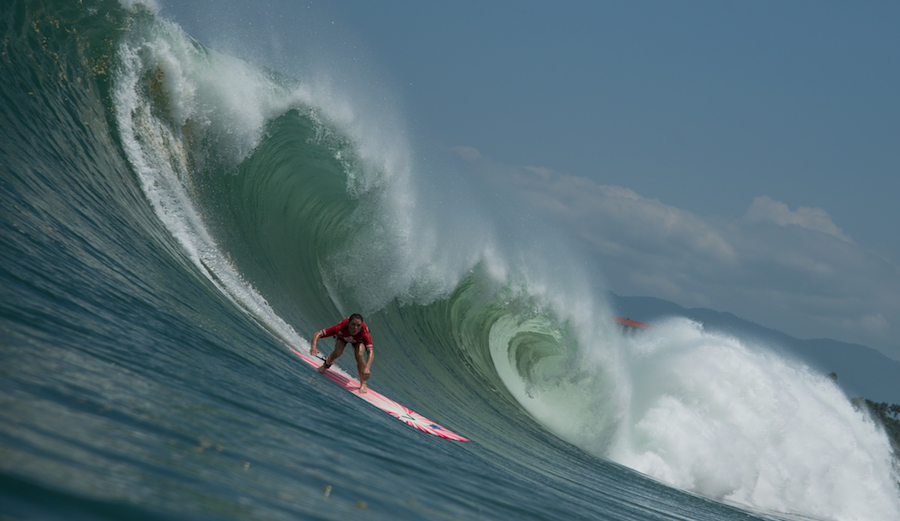 Bianca Valenti, locked into her line to the top of the podium at this year’s Puerto Escondido Cup. Photo: Maria Fernanda

Bianca Valenti is a force – as if that wasn’t already understood. After launching a crowdfunding campaign with Keala Kennelly to make up the $9,000 difference between the men’s and women’s prize purses for this year’s Puerto Escondido Cup, when the contest went Green Alert, Valenti showed up to blow up and won the whole thing for the second year in a row.

Now, back stateside we had a chance to pick her brain about the win and what the next hurdles are, as she sees them, for the wave of equity sweeping professional surfing.

Congrats on the win at Puerto! Where’s your headspace at?

It was really fun and I’m stoked, you know. It was great hanging out with (Keala Kennelly) and she made a great speech on equity on the stage (after the event). And we had fans lining up to take their photo with us for 20-to-30 minutes at a time. Just lines and lines of people. So, I think that Latin American energy was definitely my favorite part about the event. So much passion and energy around.

So, the story is both you and Keala Kennelly launched this GoFundMe and then you took home the win, that’s got to feel pretty validating, right?

I think the real win is just having this moment go down in history for all the kids to be able to believe that anything’s possible for their future. So, for me, the win is our win. And to win, personally, it’s awesome and I will be honest, I haven’t had a chance to celebrate it. I’ve had to do so much work (managing the GoFundme). KK had the awesome idea and I did all the writing and everything and it was basically like running a small business for a month (laughs).

I mean, it’s such a novel idea. I don’t think I’ve ever heard of a group of athletes crowdfunding the difference for equal pay. Can you tell me more about the background of where the idea came from?

When I got the invite, I glanced through the press kit and saw that there was a huge pay discrepancy. The winnings were actually equal for the men from last year and the women’s side had $1,000 more than last year, but in total, the difference between the men’s and women’s purse was $9,000. And I thought, “Ugh, that sucks.”

We had already done all of this hard work and got the WSL to stand behind equal pay and so I called Gary Linden and he was just like, “It’s so hard to find the money in Latin America. We found extra money for the women, but we couldn’t find any more. And the men have had the same prize money since the event began.”

Anyone that’s using surfing as part of their marketing or part of their brand should really think about how they’re spending their money.

It was a tricky situation because we just want equal pay to be the standard, and it’s so awesome the WSL is behind that because they’re the biggest surf league in the world. But, it was a question of how we could accomplish this so last minute, and also not go back on the success we’ve achieved.

We also thought it could be a really cool way to get fresh eyeballs on how awesome big wave surfing is and just raise awareness for new sponsors who would champion equal pay. So, Keala had the idea and I talked to Gary (Linden) and he was open to it, so we thought what the heck?

What was it like seeing that support pour in so quickly?

It was a little bit addicting (laughs). I kept getting notifications on my phone from GoFundMe. And we got generous donations with a few individuals donating in the $1,000 range, but it was really cool seeing people stepping up with whatever amount – whether $5, $10, whatever – that was the part that was really cool, just seeing how many people really do support us and support equity and to know that things are changing for the better.

Gary (Linden) and I were in communication the whole time and they were thrilled. They felt hope and felt inspired because, for anyone who’s ever been on the organizing side of events, it’s not easy to lock in really good, solid sponsorships. So, I do think it’s going to take a new approach. This worked as a short-term solution, it fired up event organizers, and I think it really helped them see the value that we bring to events.

I think we should be really proud of the WSL for all they’re doing to become a diverse and integrated sports organization.

So, this is the first big wave event in Latin America to offer equal pay, right?

Right. And the other cool part was this was all voluntary, it wasn’t mandated by any law. In California, we have the Unruh Act and for all the class action lawsuits that are going on, like with women’s soccer, there are laws that will be explored. But, we’re dealing with Mexico and Latin America, so it’s not my place to deal with anything that has to do with the law there. And I also wanted to be really respectful of Mexico and the culture and people there because I love Mexico.

That was actually the coolest part in all the grunt work, too, was every time I checked in with the locals, whether it was Isa Leonhardt or Coco Nogales, the passion that was coming through in Isa’s voice when she said how meaningful this would be for little girls to be able to see they’ll be valued for the quality of their work and not on the basis of sex was the really profound meaning in all of this that felt so special.

Thinking about where this journey’s taken you so far, what’s next for the wave of equity?

I would really like to see the different brands stepping up – surf and non-surf. Anyone that’s using surfing as part of their marketing or part of their brand should really think about how they’re spending their money. We want to see equity at every level, even within an event. Like, how many women are running the event? How many female judges are there? So, it’s about starting to think about the big picture. We just got equal pay, but what’s the next step toward true equality? I see corporations as being a huge part of that, and I see inclusion in high-profile events as being another part.

That includes seeing women on executive boards at major brands, too, right?

Yes. And I think we should be really proud of the WSL for all they’re doing to become a diverse and integrated sports organization, especially with Sophie (Goldschmidt) as the CEO. They’re doing great work and taking big steps, but it takes everybody. We need the brands and the media outlets to step up. Are all the media outlets sharing women’s stories and highlighting female athleticism? Equal pay is one tiny part of the equation, and it’s not even really about the money it’s about respect and appreciation for all humans. But, money is important for athletes because it’s the way we can support our performance. So we do need brands to step up with the money in order for our performances to progress.