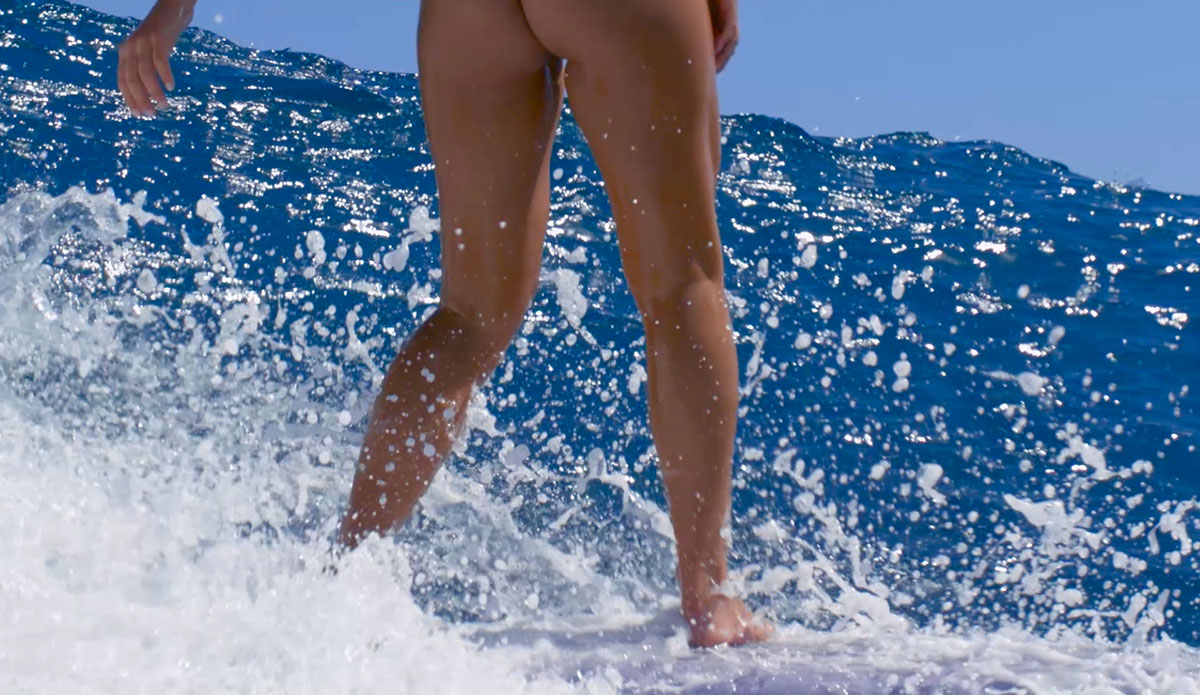 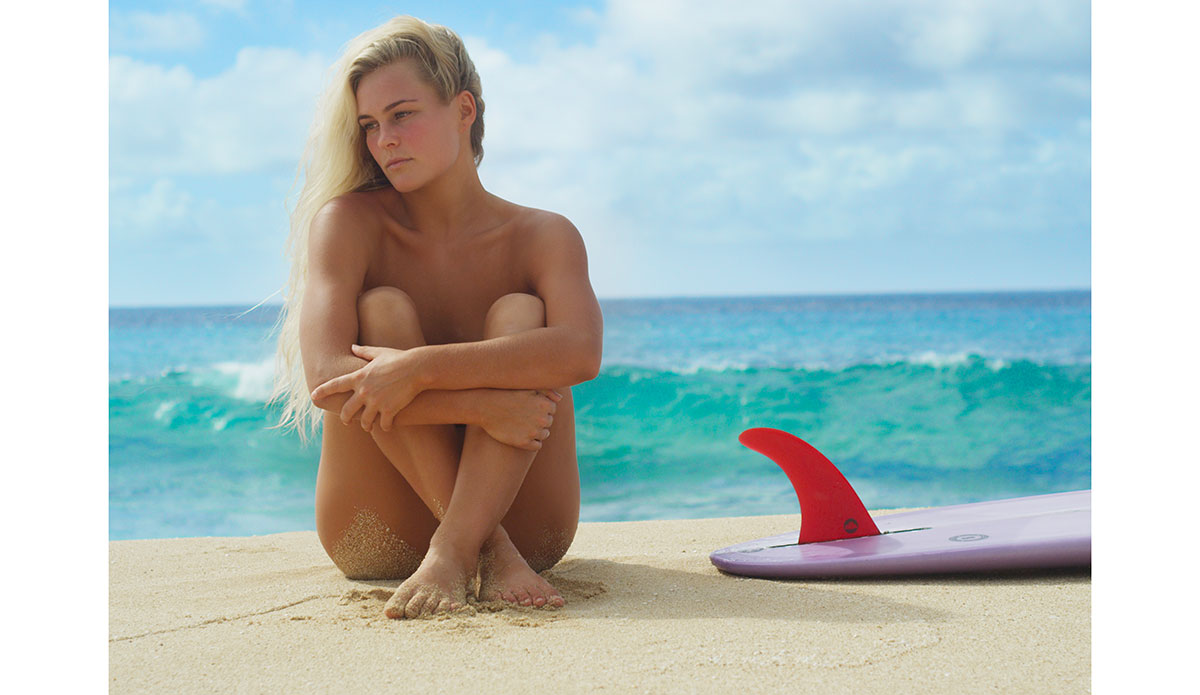 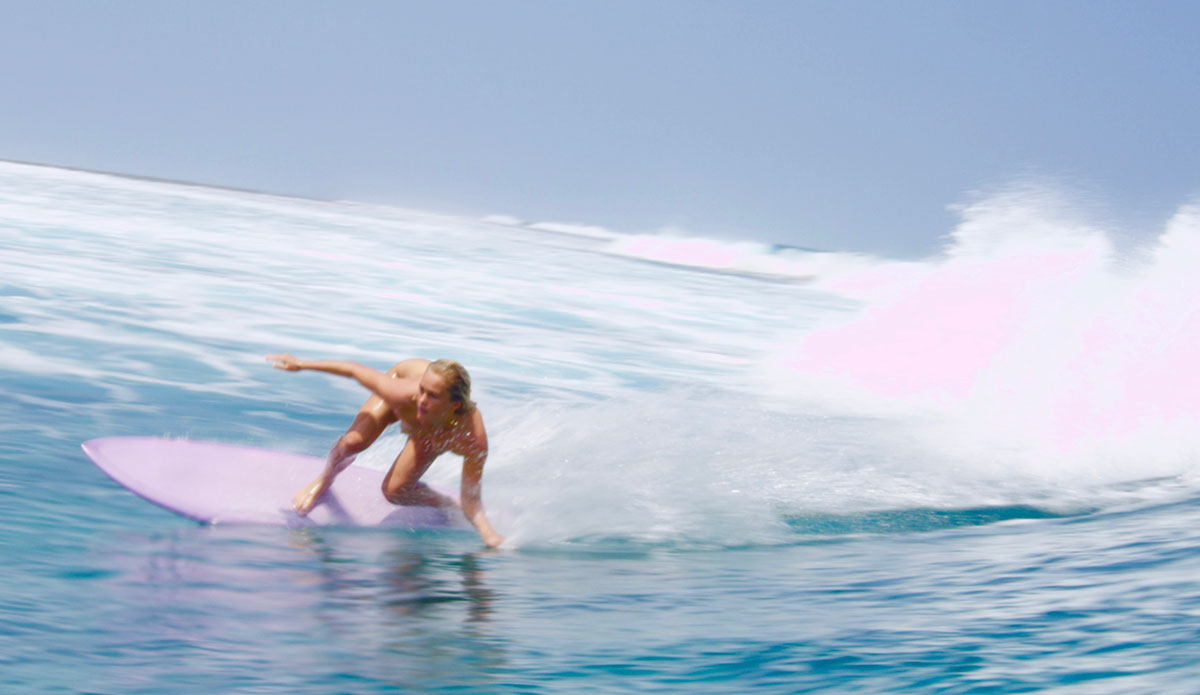 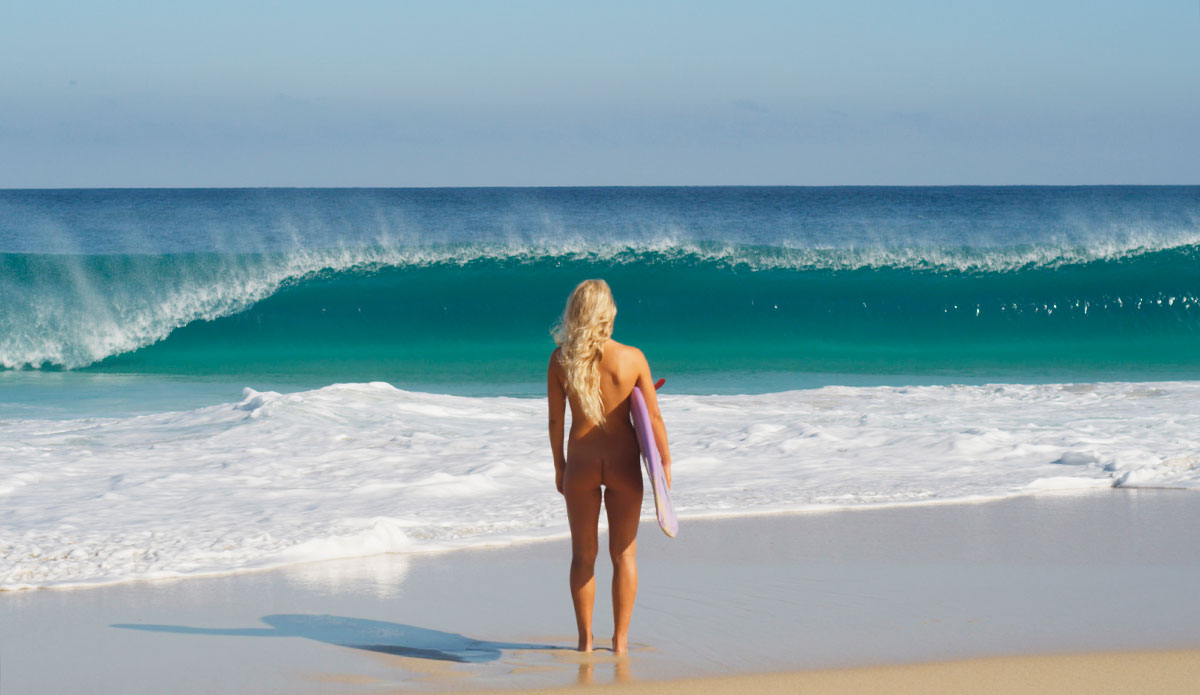 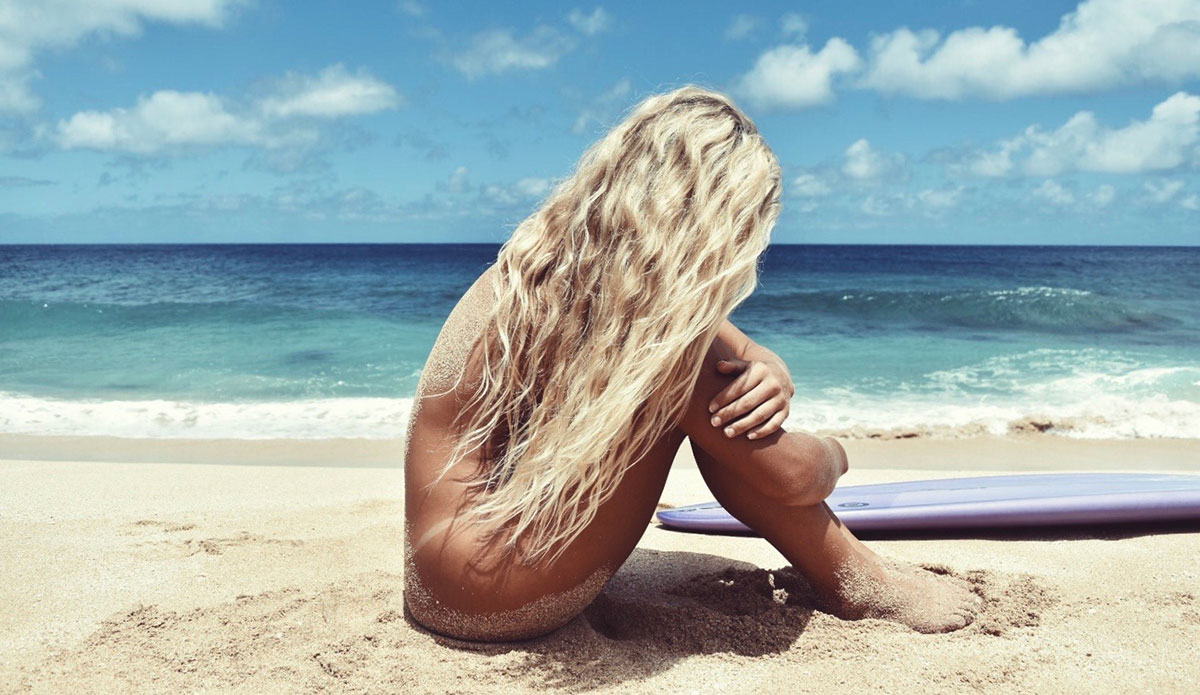 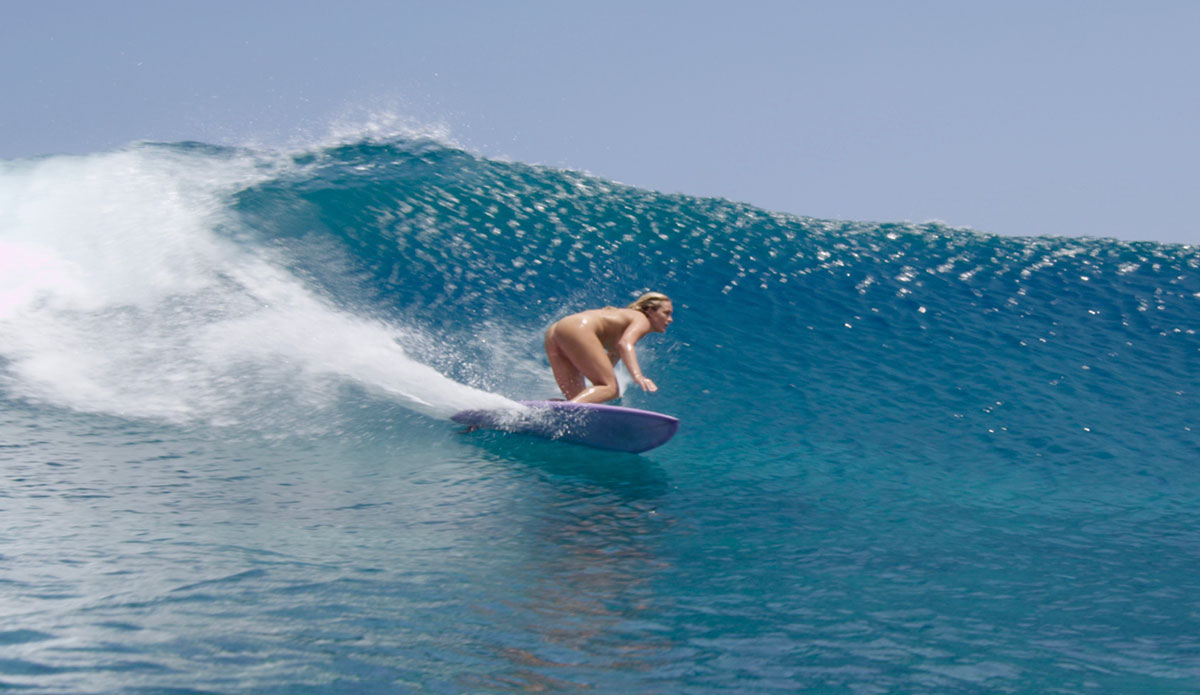 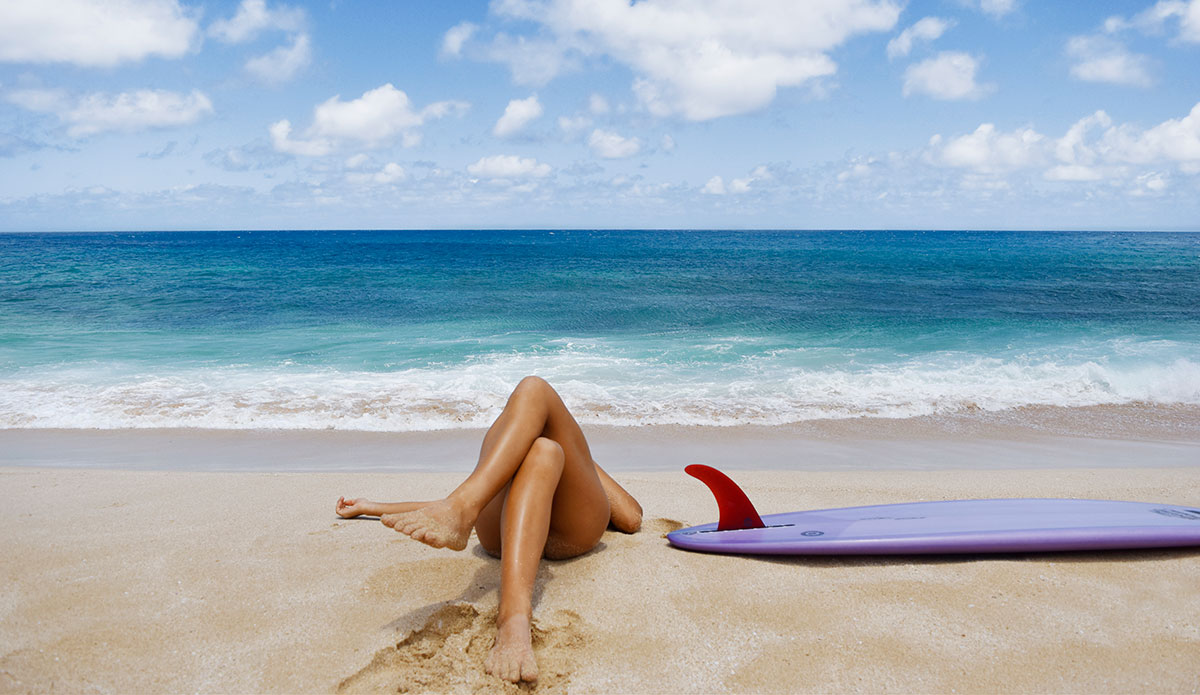 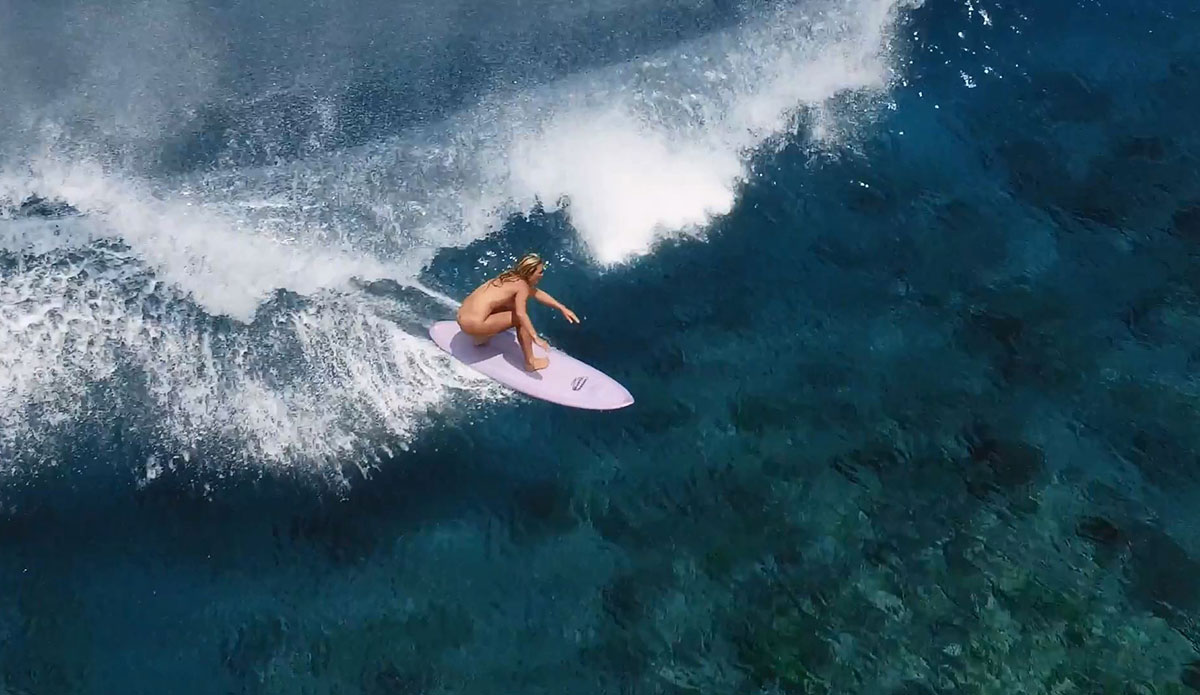 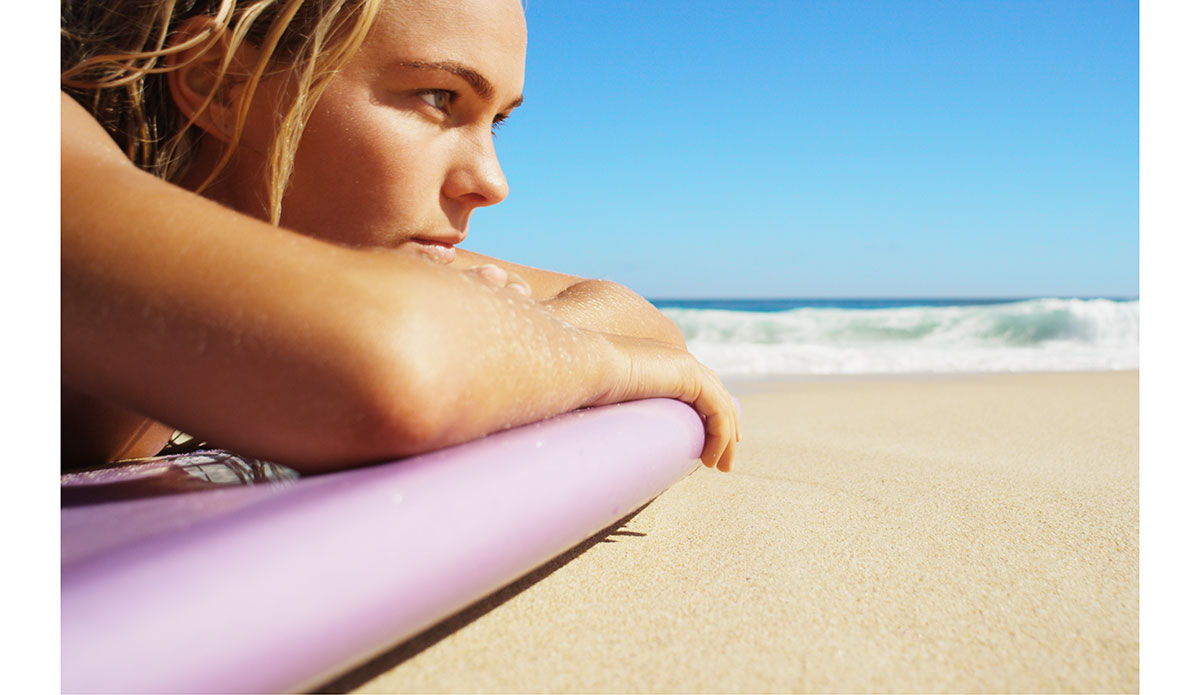 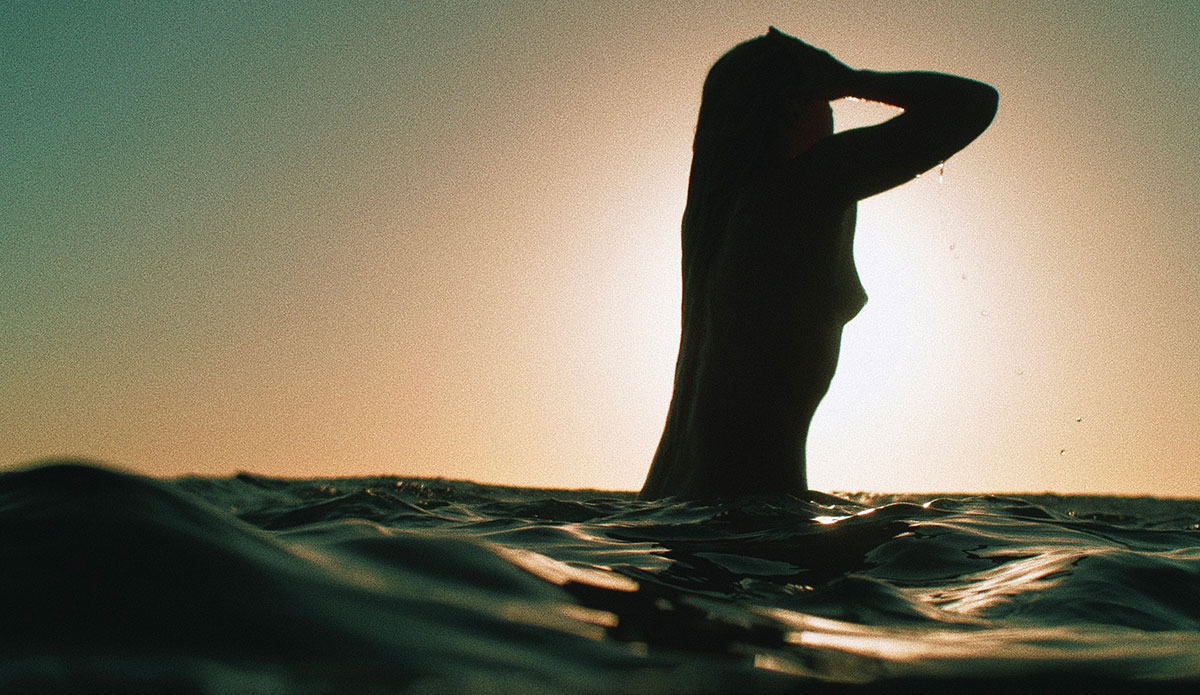 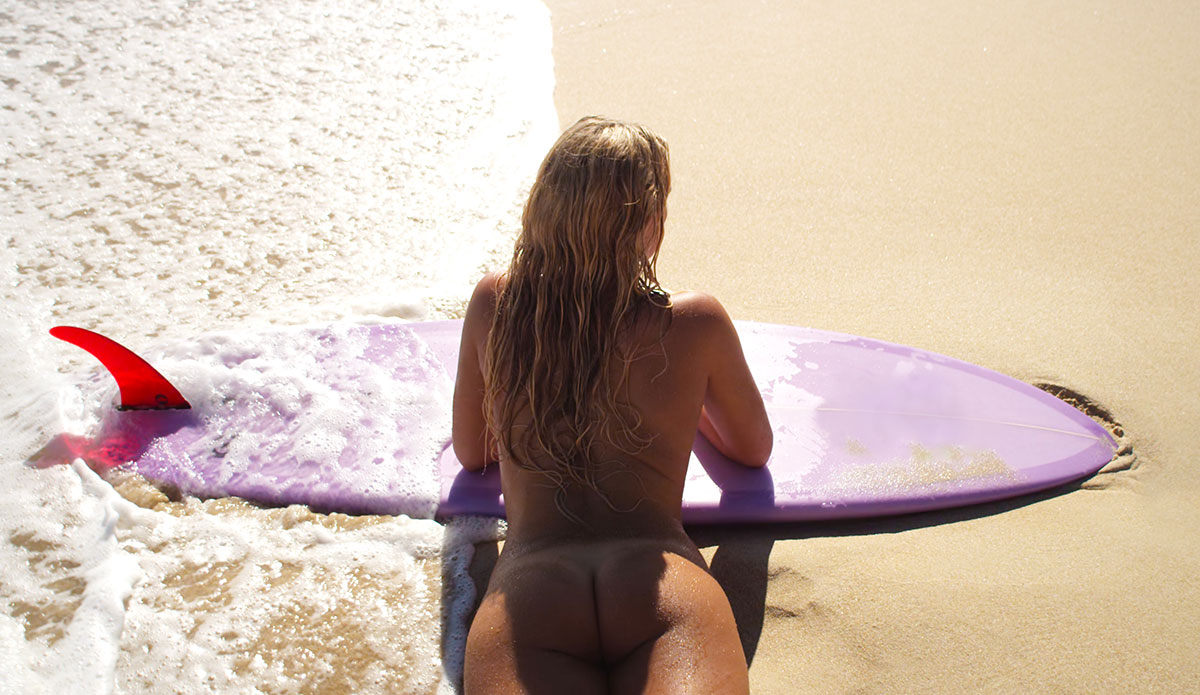 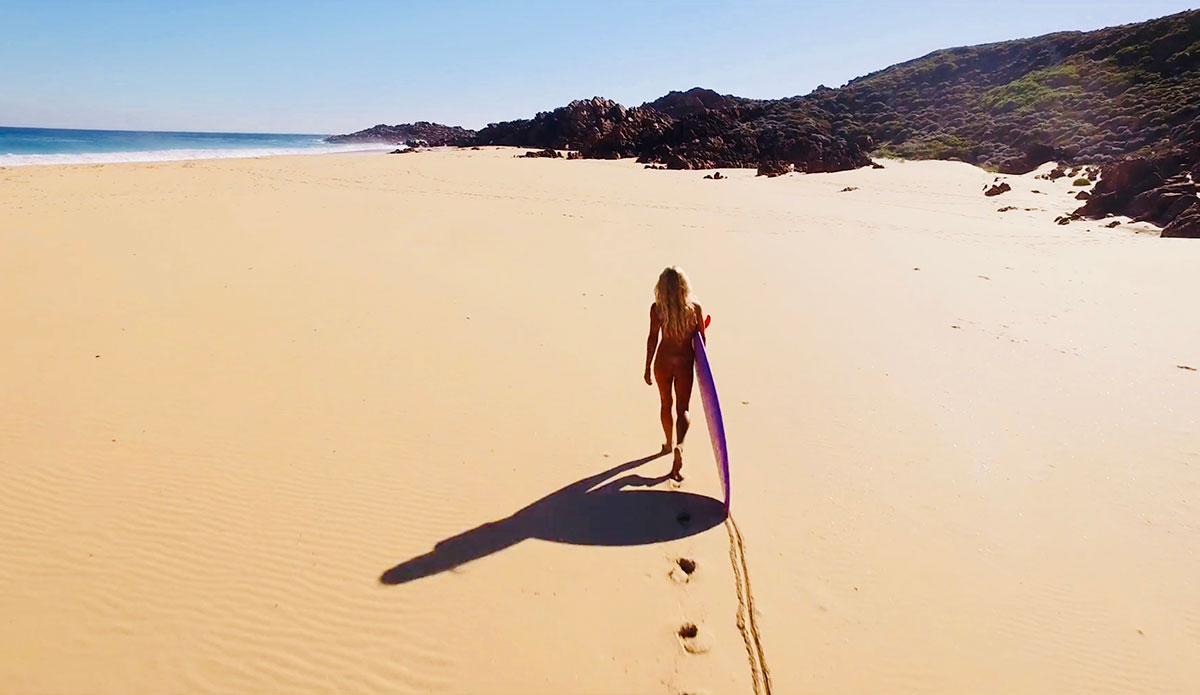 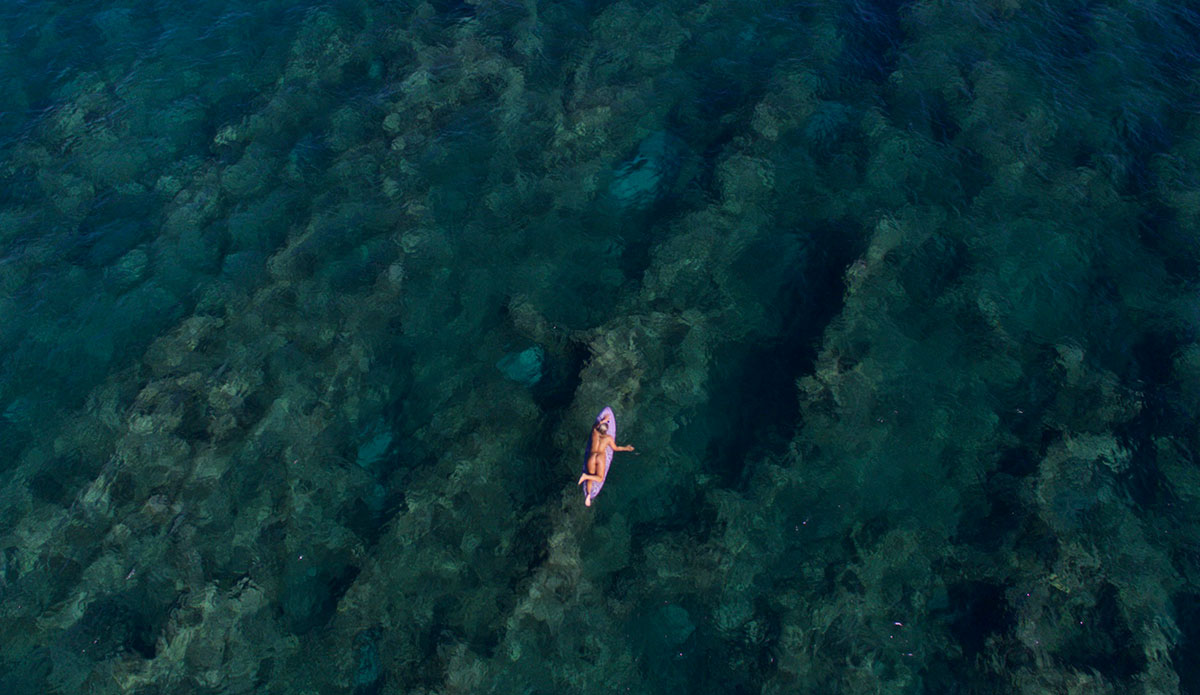 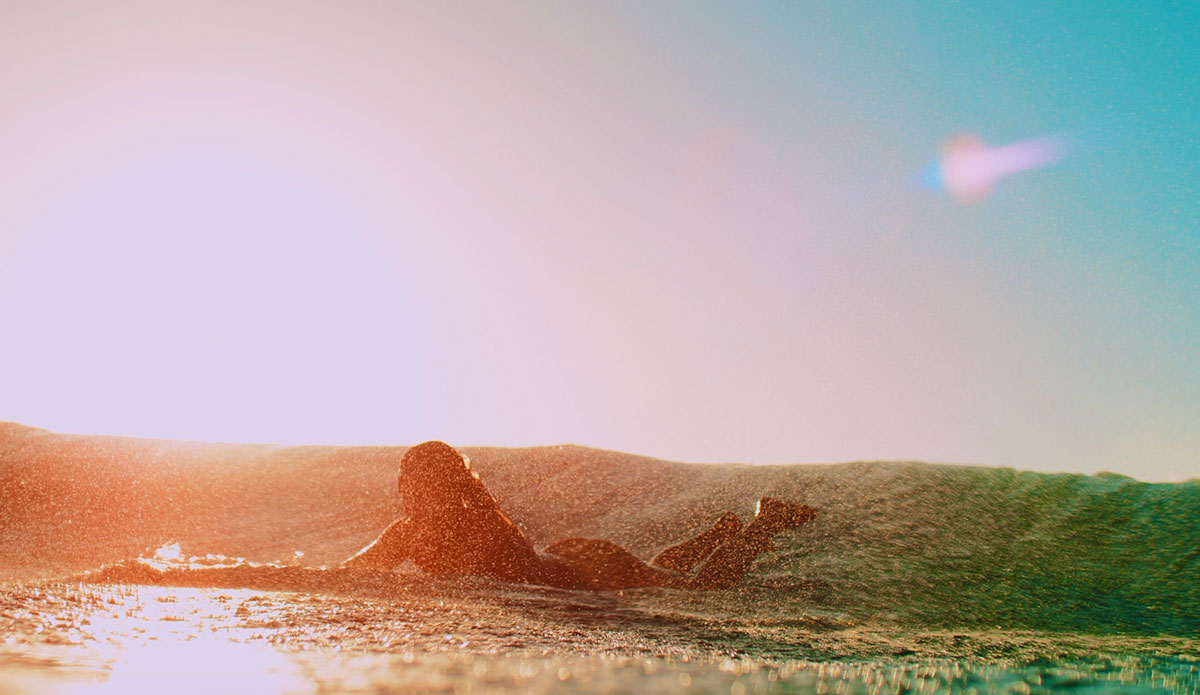 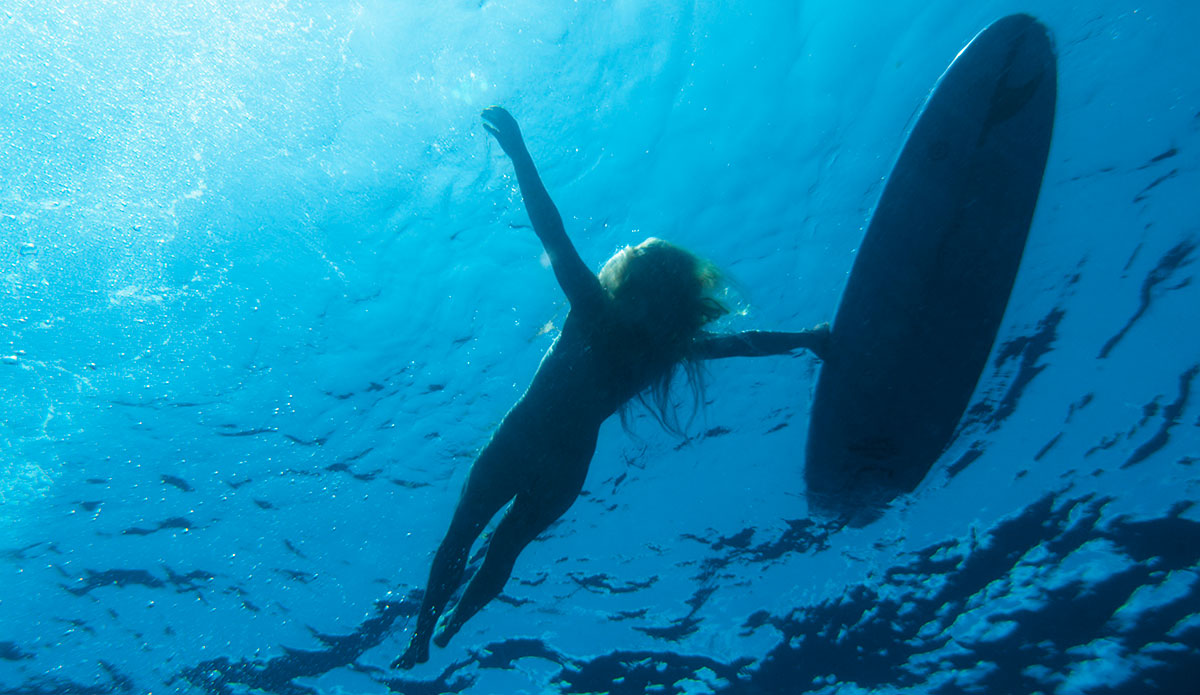 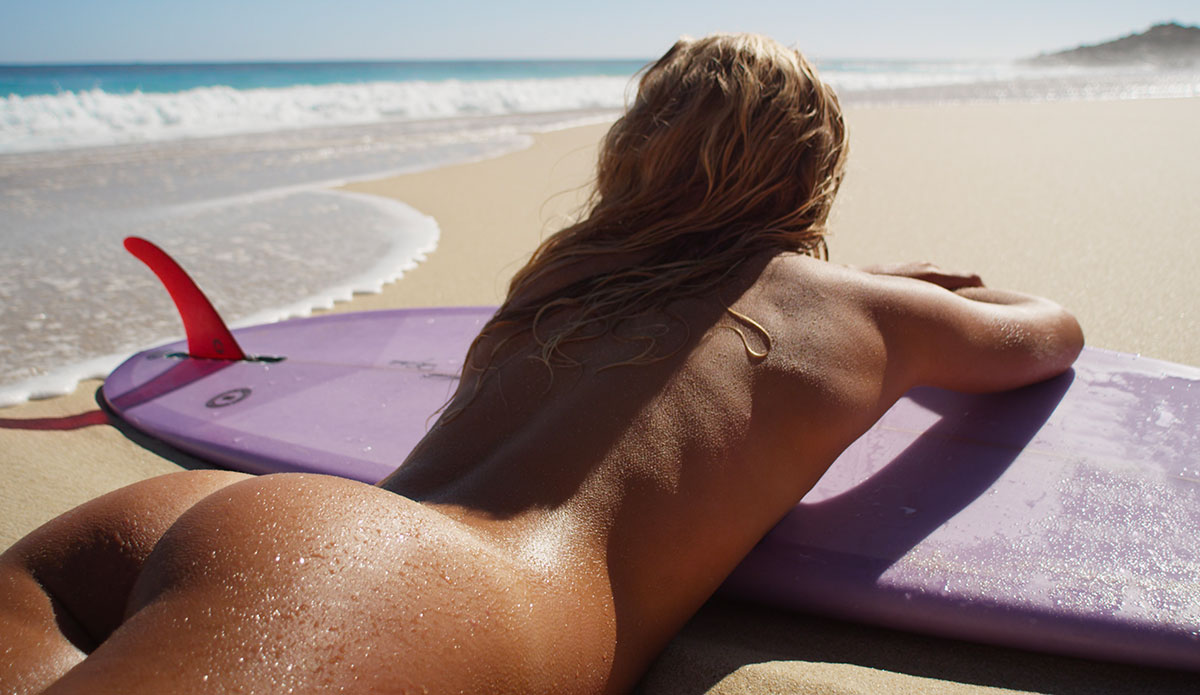 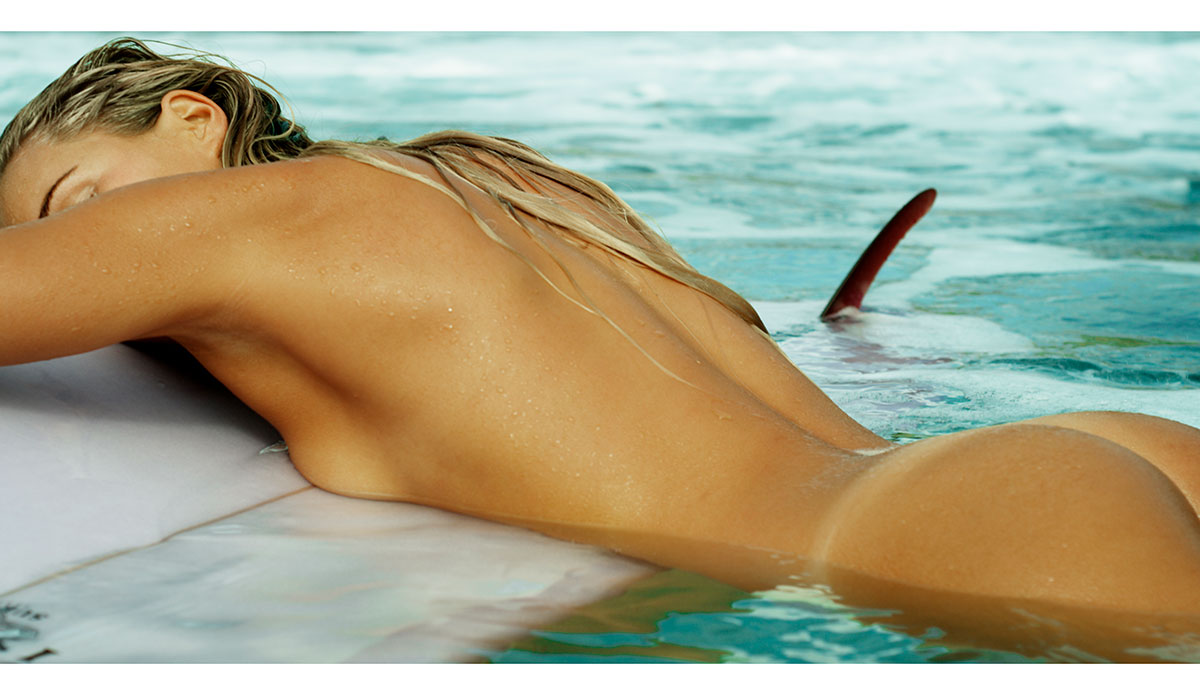 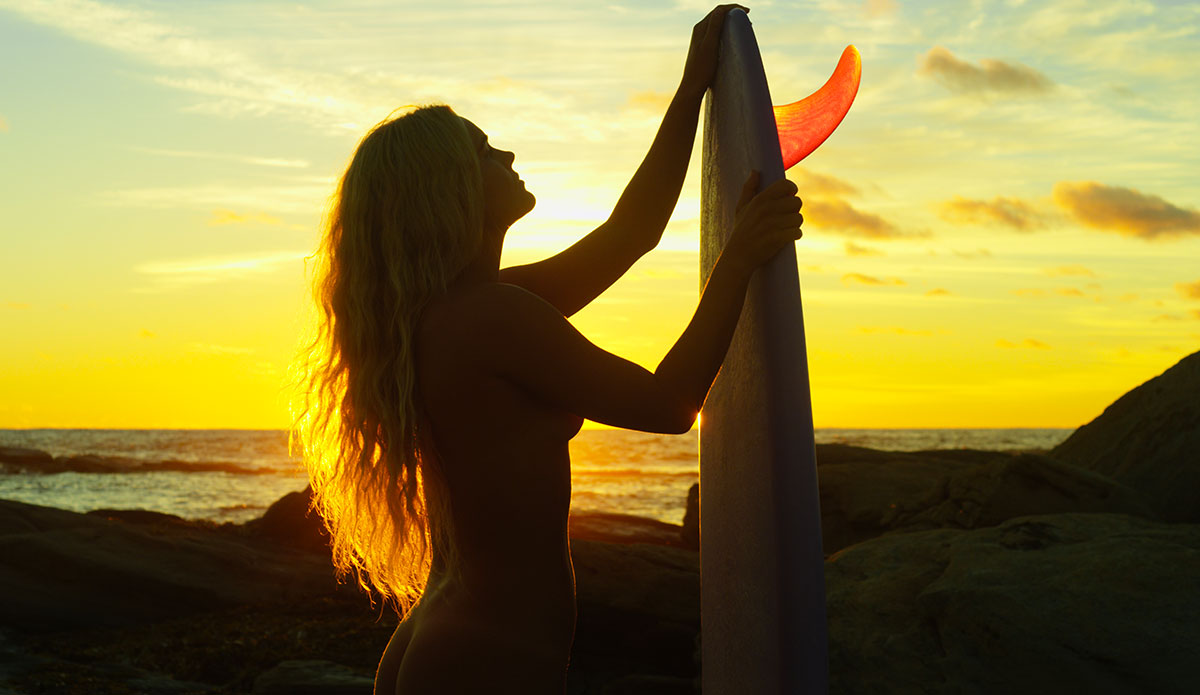 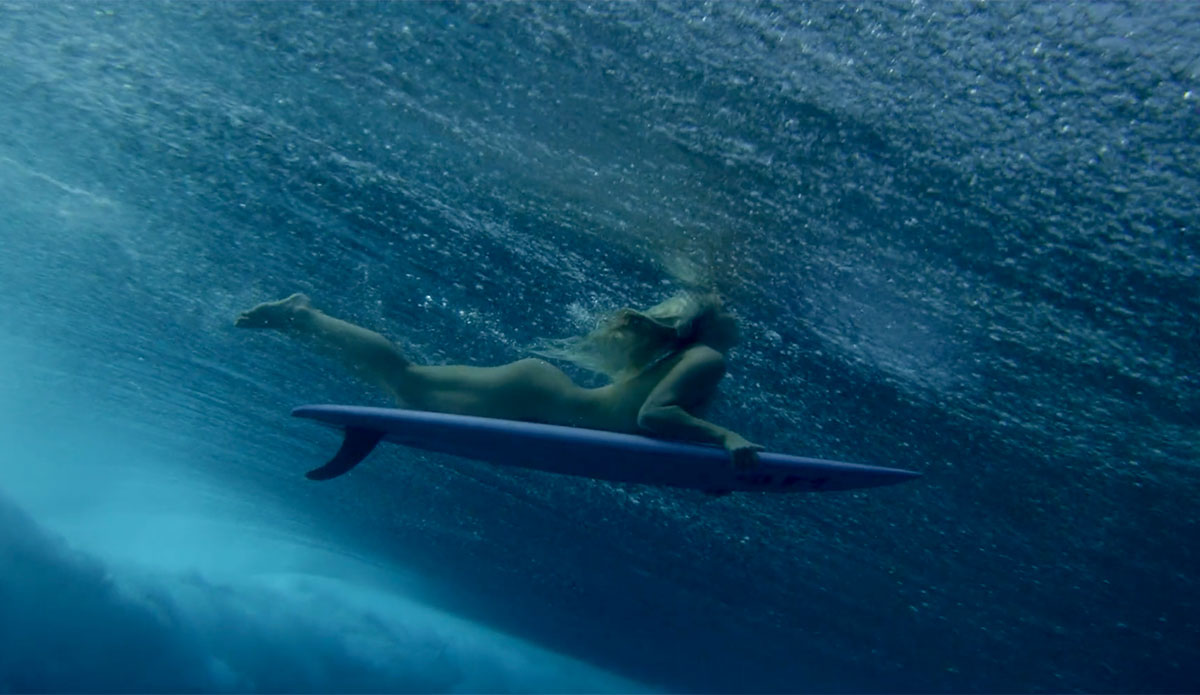 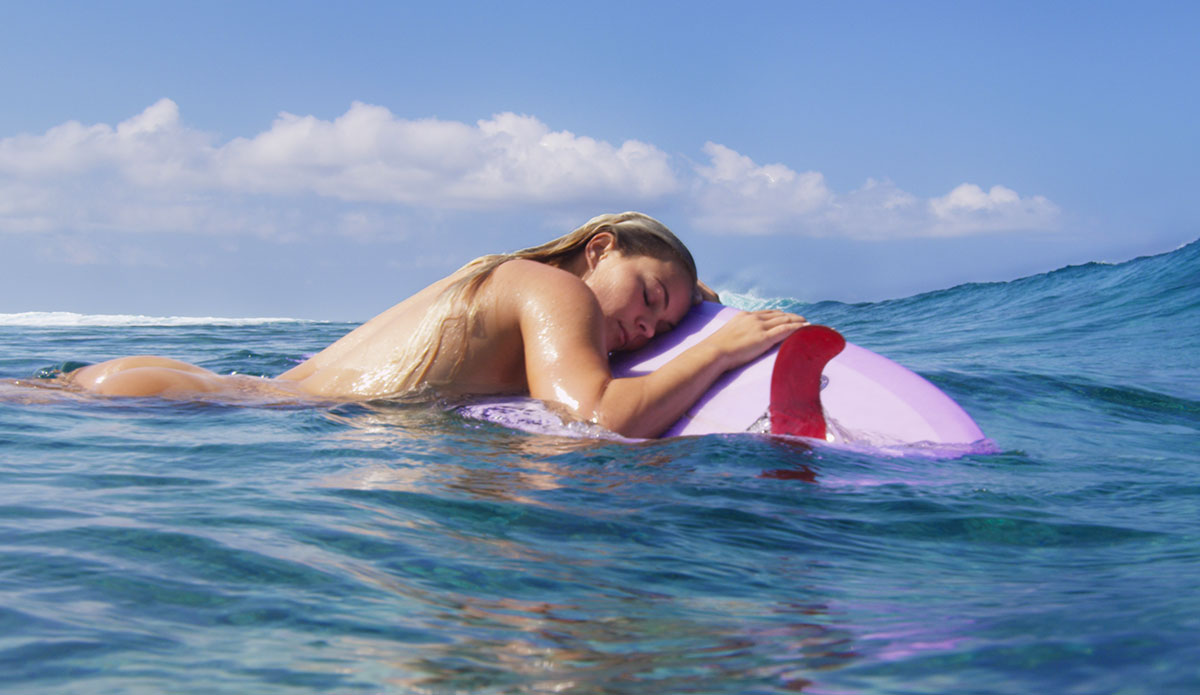 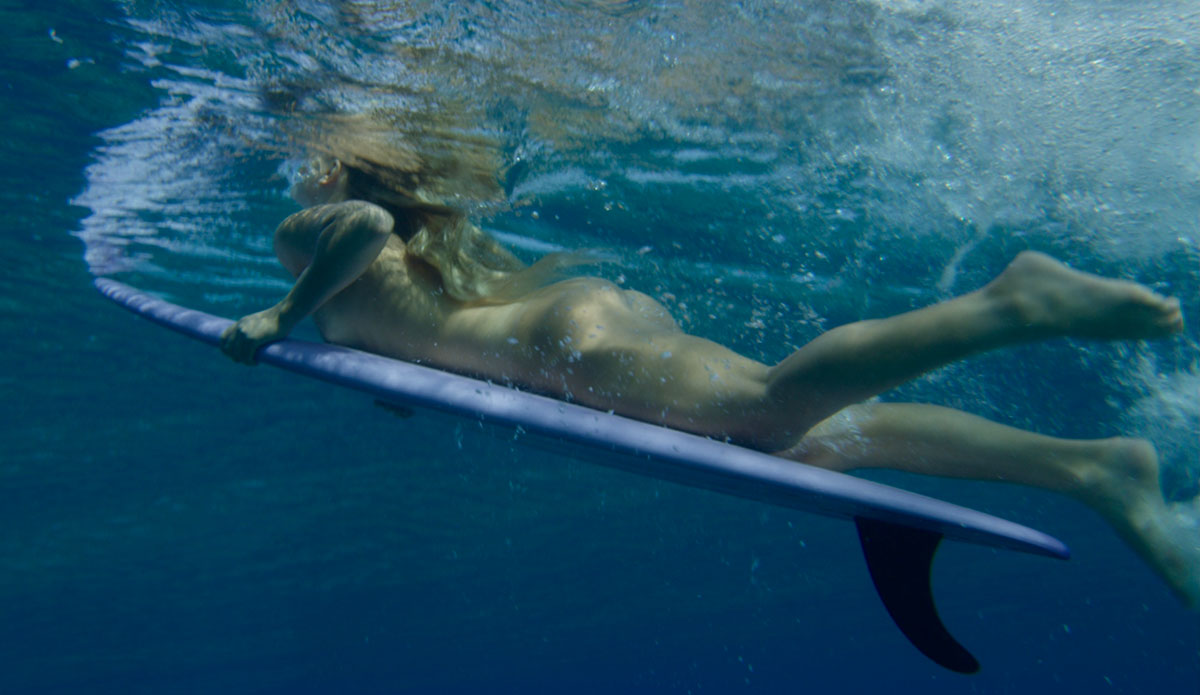 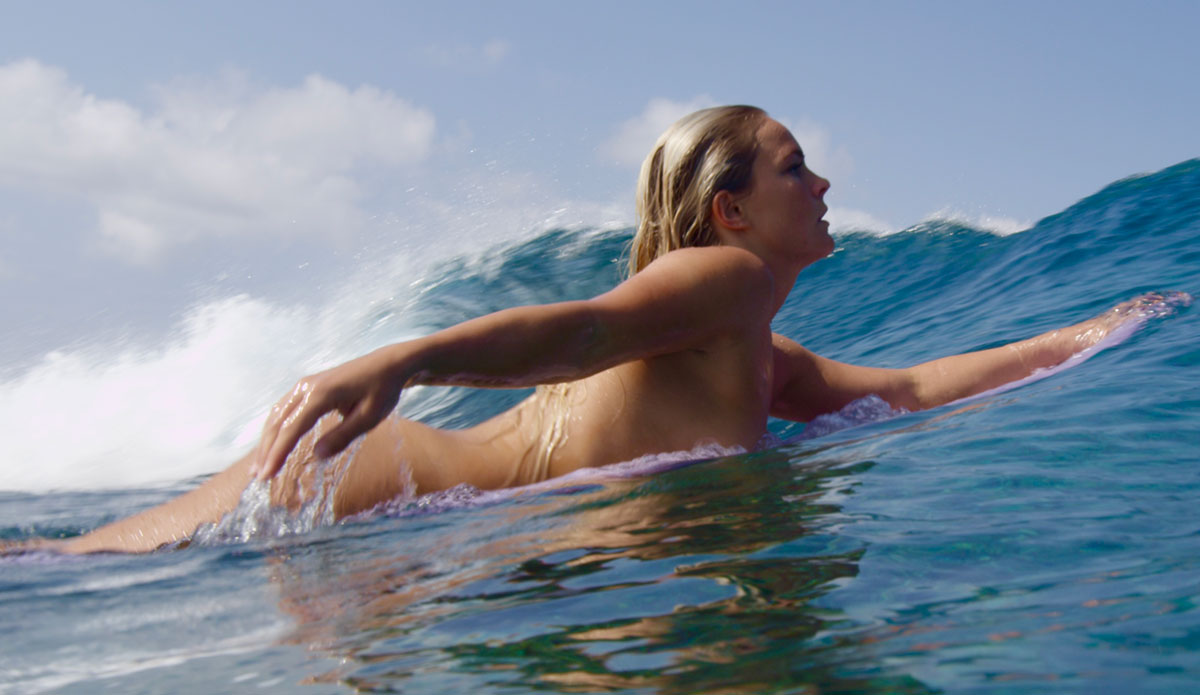 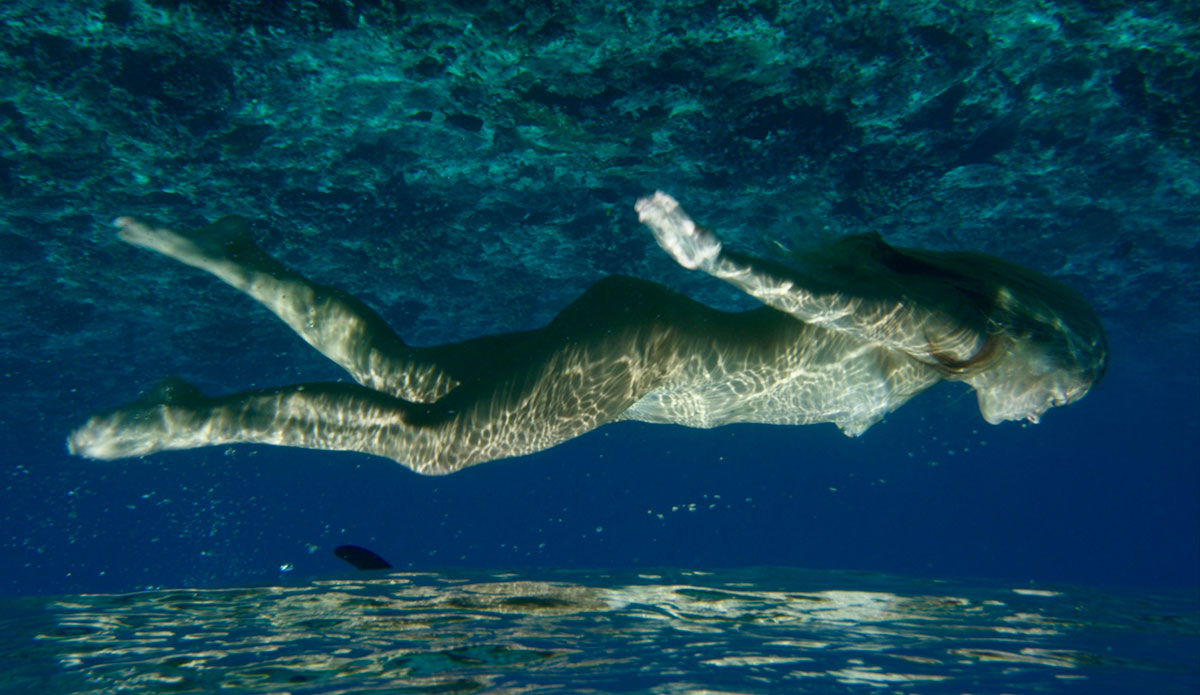 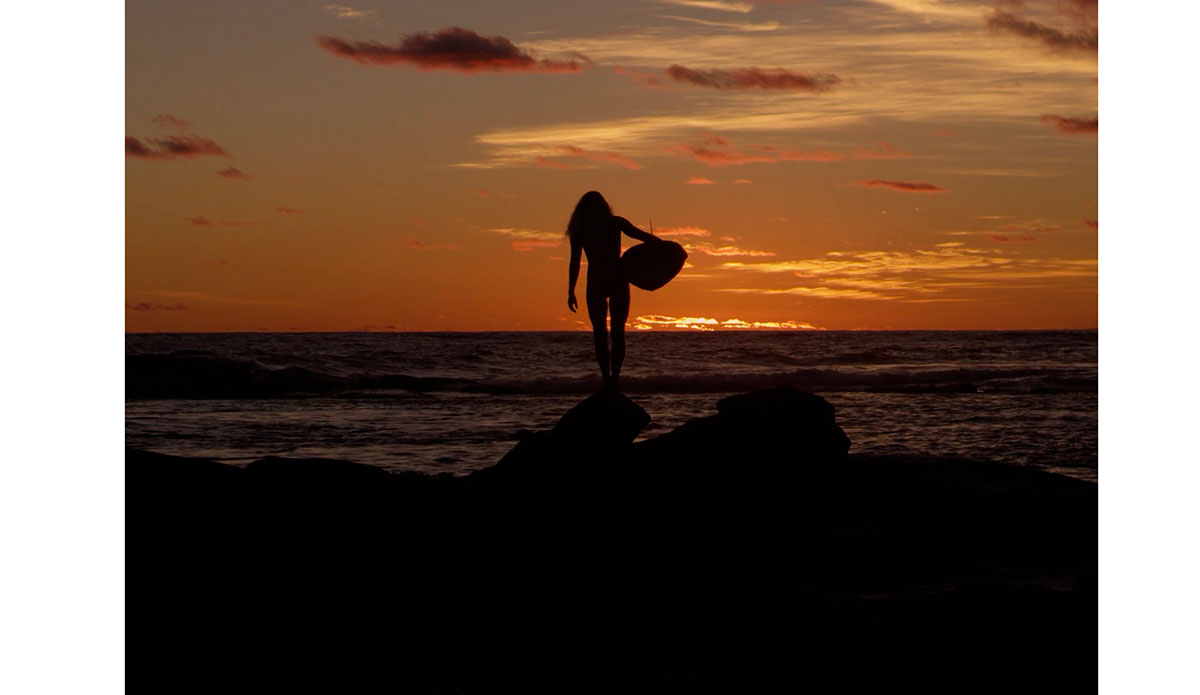 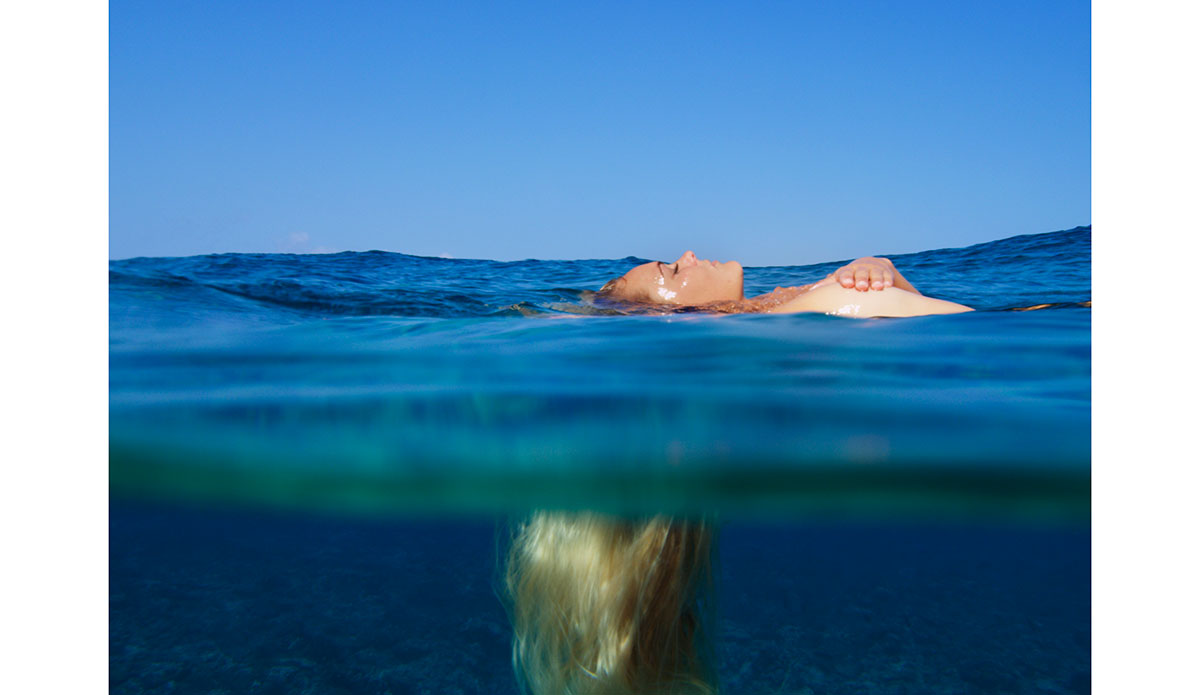 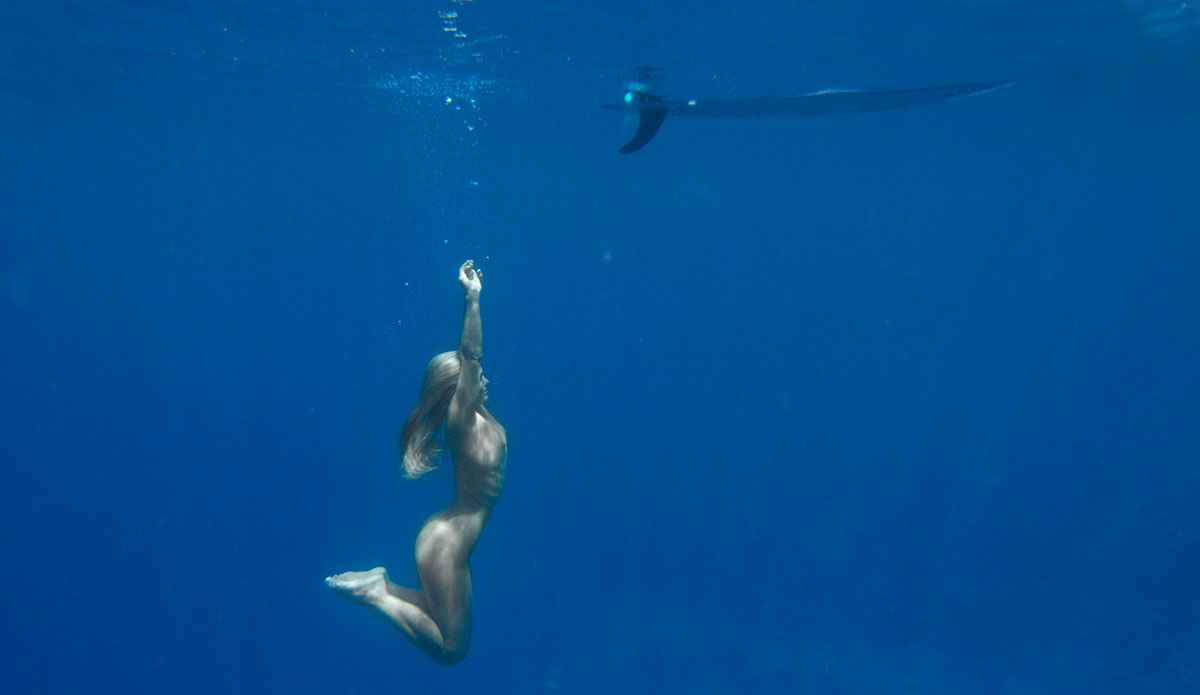 You know that dream you have? You’re standing in front of an auditorium full of people, or in front of a classroom, or maybe on a stage somewhere, and you look down and realize with horror that you’re stark naked. It’s a common fear, being caught naked in public, and that dream likely has something to do with some inner fear of letting people see you as you really are. But Felicity Palmateer leans into that fear, and she leans into it with a big smile on her face. She recently did something that not a lot of people would feel comfortable doing: she released a four-minute video of herself surfing completely naked. It’s “an audio-visual performance-art project that meshes her two life-long passions: art and surfing.” And it’s a beautiful thing.

Palmateer’s an interesting woman. After I emailed and asked to speak with her about the film, entitled Skin Deep, she asked me to call her at 4:30 a.m. Her time, of course, which thankfully was 12:30 p.m. for me. She answered on the first ring, her voice heavy with that West Australian lilt and, despite the hour, completely free of drowsiness. She’s supremely driven in just about everything she does, proven by the simple fact that an interview well before the sun rises wasn’t actually a big deal. “Yeah, it’s bloody early,” she said, “but I’m up most mornings by 4:30 a.m., so it’s not too bad.” She’s proven herself at massive Jaws. She’s a passionate artist, a conservationist, a rule breaker, and a trend setter. She was the first woman to surf at Cowaramup Bombora, better known as Cow Bombie, that terrifying big wave spot in WA. She puts maximum effort into everything she chooses to do, which is why Skin Deep is what it is.

Skin Deep is a lot more than just four-minutes of Palmateer surfing naked. It’s an art project. It’s a visual representation of the freedom she feels when she’s surfing; a depiction on film of the connection she has with the ocean. It’s her, baring her all — body and soul — to the world. It’s a person at their most vulnerable, exposing their vulnerabilities simply because a person exposed is the most honest a person can be.

The project wasn’t an easy one, however. For a multitude of reasons, the first of which was choosing who she trusted enough to spend a few years filming her as she stripped out of both her clothes and from the invisible cloak that most of us wear to shield our inner-selves from the harsh eyes of the world. “When I was originally thinking of the concept, I thought it would be amazing,” she told me over the phone. “But then I thought, ‘who am I going to trust to do this project?'”

Despite her carefully-chosen partners on the project, it was still a little hard to do at first, for all parties involved. “To be honest,” she laughed, “when we first went to go shoot one of those scenes, I was like, ‘shit, this is weird.’ And Dwayne was like, ‘dude, what are we doing?!’ I told him it was fine, and he said, ‘I’ve known you since you were so young, and this is so strange!’ But told him that I trusted him. He’s so professional. He’s one of the best in the business. All of the guys are absolute professionals. They’re just good guys, and I knew that I could trust them.”

After a few days, though, the jitters eased and the focus sharpened. “Once everyone started seeing the footage we were getting, everyone was like, ‘wow, this is so beautiful,’” Palmateer said. “Then we were like, ‘right, let’s do it.’”

The film is set to a song by RÜFÜS DU SOL called No Place. The band has had a starring role in Skin Deep since the film’s inception in Palmateer’s head. “When I originally thought of the concept,” she explained, “Rufus had just released their first album.  Honestly, I love Rufus. Love, love, love Rufus. I wanted one of their songs and I would visualize it all the time going into the project.”

As it turned out, though, getting a Rufus song wasn’t exactly cheap, and since the project turned out to be entirely funded by the creators (more on that later), it was a tough decision to make. “Once it came to the editing stage, I didn’t realize how much one of those songs would be,” she continued. “I was like, ‘yeah, we’re going to get Rufus!’ And then when I heard the price, I was like, ‘oooohhh… shit.’ But then when I heard No Place, I just knew it was perfect. I thought to myself, ‘you know what? Just fucking do it. Let’s just bite the bullet. You only live once. This is going to be something that’s going to be so beautiful and something that will stand the test of time. This is what you’ve wanted, so just go for it.’ I wanted everything to be exactly how I wanted it to be. I didn’t want it to go out unless it went out how I wished to see it go out. Yes, it was expensive, but it was worth it.”

Skin Deep was originally slated to come out two years ago, but after a whole bunch of publicity that included live TV, double-page spreads in Australia’s weekend newspapers, online interviews, a few screenings to clear it with the sponsors, it ran into a brick wall that stopped the release dead in its tracks. It was a curious thing at the time because no real explanation was given. Rumors floated, sure, but no public statement that placed the blame anywhere was released. As it turned out, a certain brand wasn’t happy with the skin part of Skin Deep. Palmateer still hesitates to name names, but the space between the lines is pretty wide and easy to read.

“What I’ll say is that it honestly doesn’t take a genius to figure out what happened,” she told me. “It was really disappointing. It still is. Especially when the major things are about creativity and self-expression and being totally vulnerable with self-acceptance and self-love.”

According to Palmateer, the two-year forced hold turned out to be a blessing in disguise. “I think now the timing is even better,” she explained. “It’s above being commercial. It’s not attached to a product. Yes, it’s me, but I’m not trying to sell anything. This is just me and my connection with the ocean. I have been in that world of being so commercial for so long with brands, but I feel like this is just a really beautiful piece. The whole thing is entirely funded by us. Entirely. Originally, I was bummed when they backed out. I can see why — everyone is entitled to their own opinion of everything — but I’m even more pleased with the way it is now.”

Of course, since it is a film that involves a naked woman, there will be people who mistake it for something it’s not. It is, in the mind of the creator, an art project, and that makes it art, no matter what anyone thinks of it. Hell, it’s already happened: when we first wrote about Skin Deep‘s release, the very first comment was “when talent fades, the clothes come off.”

Palmateer, however, is completely okay with people questioning the motives behind the film. “You know what?” she said. “It is an art project and I am an artist. I’ve exhibited before. I’ve been an artist longer than I’ve been a surfer. I think because it’s an art piece, if it is challenging people — and some people are going to absolutely love it and some aren’t going to like it — you can’t ever please everyone. Art is there to challenge and provoke people, and if that’s what it’s doing, then it’s doing its job.”

Skin Deep is available to rent on Vimeo.