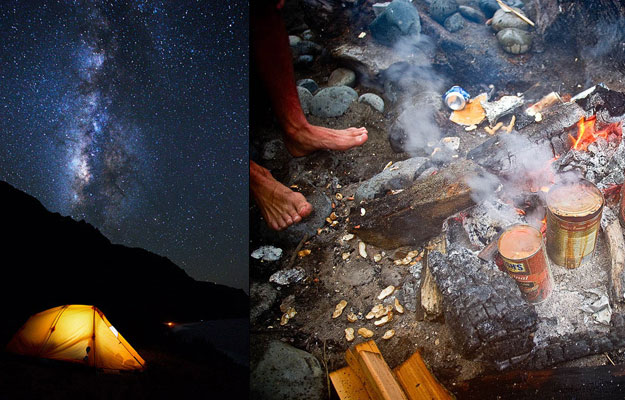 If there are plug ins, bathrooms, and a place to do your laundry, you’re not camping, you’re just telling your friends you are. Photos: Quincy Dein/Tim Nunn

I’ve always liked camping. Most people do. You get to go outside, live under the trees, wake up with sand in your hair, and generally thumb your nose at showers and cleanliness and all the trappings that come with being civilized. And honestly, there aren’t a lot of places left in the world where all you have to do when you need to pee is turn around. It’s good to get dirty. Dirt isn’t dirty. You know what’s dirty? Subways. Public bathrooms. Back alleys. Not dirt. Not the forest – it just happens to have dirt in it. It’s unfortunate that the word dirty has the word dirt in it, because when you really think about it, what would you rather lick? The dirt-filled forest floor, or the dirt-less concrete in the alley behind the 7/11? If you chose the latter, watch out for needles and old urine.

I’ve done a few surf camping trips that have been pretty darn good. We’ve blown up a van with gasoline and fireworks. There have been backroad breakdowns. We’ve spent weeks on end sitting in the rain with only hotdogs, pickles,  stinking wetsuits, and bottles of warm whiskey. I spent four months truck-camping in a rest stop on the side of the I-5. I watched my best friend get sucked out to sea in a sleeping bag in the middle of the night. Have you ever tried to swim when you’re in a sleeping bag?

From these camping trips, I’ve compiled a list of five things that are absolute – and I do mean absolute – must haves on any camping trip. Of course there are many more, but with these five things, you’ll have shelter, warmth, and the ability to eat. All the rest is just fluff. Never mind the marshmallows, folding chairs, propane stoves, and RVs. And if there are plug ins, bathrooms, and a place to do your laundry, you’re not camping, you’re just telling your friends you are.

Listen to Douglas Adams. Don’t forget your towel. It’s one of those things that always seems to get left behind, crumpled up on the bathroom floor. Sometimes I’ll see it sitting there, pick it up, realize it smells like a wet werewolf, and throw it back on the floor. But trust me, a moldy towel is better than your underwear when it comes to drying your face when you get out of the water.

Who needs a tent when you have a big plastic square and some rope? It also doubles as a raincoat, a slip and slide, and if you fill it with your stuff and tie it to a stick, a hobobag. Plus, if you get drunk (like many campers do) you can wear it as a cape and leap out of trees, impressing your friends to no end. Hopefully the next day, they’ll remember how much entertainment value you have and reward you by not dropping in on you so much.

4. Break out the Hatchet

This one’s pretty obvious. What else are you going to throw at trees? Rocks? Not likely. They just bounce off and hit you in the teeth. Hatchets stick in, saving your teeth undue wear and shattering. Oh yeah, and they’re handy for cutting firewood and hammering things, too.

5. Break out the Fishing Rod

Even if you don’t fish, you should bring one. You know why? Because you should fish. It’s good for you. Serenity now! It’s also the cheapest way to consistently eat – as long as you’re fishing in a place with actual fish in it. That’s important when it comes to fishing. If you’re just planning a weekend trip, try and do it close to a river. This is especially good for surf camping. You know that little right hander you surf in front of the river mouth? After you get out and dry your face with your underwear (YOU FORGOT YOUR TOWEL!?), go for a hike up the river. Find a little hole, put a line in, and see what you come up with. If all else fails, you can always eat the boot you pull up. Leather is surprisingly nutritious.

You should fish. It’s good for you. Serenity now! Photo: Haro

And finally, an Honorable Mention

Listen, everyone knows that a bottle of something strong is pretty much a necessity on any camping trip. I was actually going to put it at the top of the list, but then I thought it might be better to have an actual list of useful things. But it’s going to get an honorable mention. Just don’t go blaming me when you end up lying in the dirt wrapped in a tarp that’s soapy and wet because you used it as a slip and slide.  Or when you wake up without eyebrows because of the gasoline you poured on the fire, and your dentist is out buying a new Mercedes in anticipation of your next trip to see him with your hatchet mouth.  So I’m not saying you have to drink it. Maybe you could trade someone for a tent and a sleeping bag, like any normal person brings camping. Why didn’t you bring a tent and a sleeping bag?