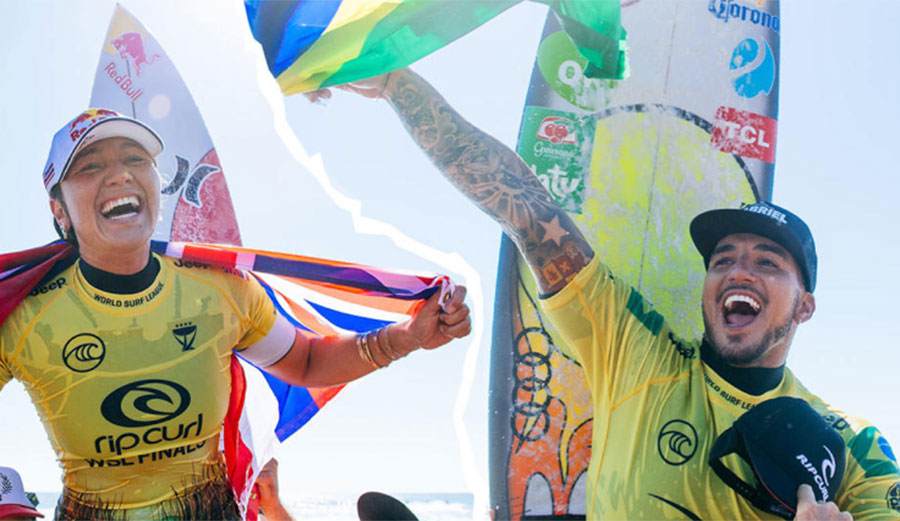 Gabriel Medina and Carissa Moore kept their seats as the best surfers on the planet at Lower Trestles today. Photos: WSL

After much anticipation, and a few days of waiting — first for the waves to show up, and then for the surf to clean up — the first WSL Finals went off in dynamic fashion today. Monday was the much-anticipated day most everyone thought the event would go, but the dawn-patrol session saw chunky closeouts and a fog bank that rolled in right as the 7:30 a.m. call was being made, hiding the lineup from sight and quashing any hopes of the event running. The WSL didn’t just need good conditions, they needed a full day of perfect waves to give competitors a fair shot. And after all the waiting, both the number-one ranked surfers, Gabriel Medina and Carissa Moore, were crowned World Champions.

The waves were absolutely perfect. Trestles was huge, by Trestles standards. Outside double-overhead sets flowed in for most of the day. Leading up to the event, there was questions whether Lowers would be able to hold the huge, long-period swell that was on tap — questions that were definitely justified by the wonky conditions on Monday as the swell continued to build. But that was quickly put to rest today. 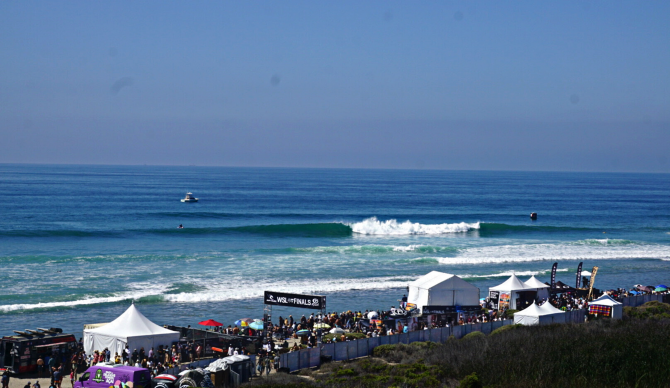 Tuesday morning dawned with an excess of power in the water. I squeaked out for a couple of waves at Middles before the event started and was pleasantly surprised by the swells strength. The first set absolutely rocked me as I tried to duck dive. When the event began there was still some wobble and morning sickness, but as the day went on the wind died, the sun came out, and Lower Trestles was better than perfect. It was glassy and big. “It showed a lot of wisdom from the WSL to run the event during this window at Lower Trestles,” said Selema Masekela. “Holding off yesterday was a great decision, because it just doesn’t get better than this.”

Hometown supporters came in droves. But soon there were a lot more than just hometown supporters on the beach. By midday it was completely packed, shoulder-to-shoulder standing room only, with the crowd of spectators stretching hundreds of yards up and down the beach from the event area. “I guess nobody in San Clemente works, huh?” A passerby queried, and while he was probably off on that, it did feel like the entire town had turned out, and then some. Portuguese was as widely spoken as English, as Brazilian supporters turned out in force to witness the crowning of a Brazilian World Champion. 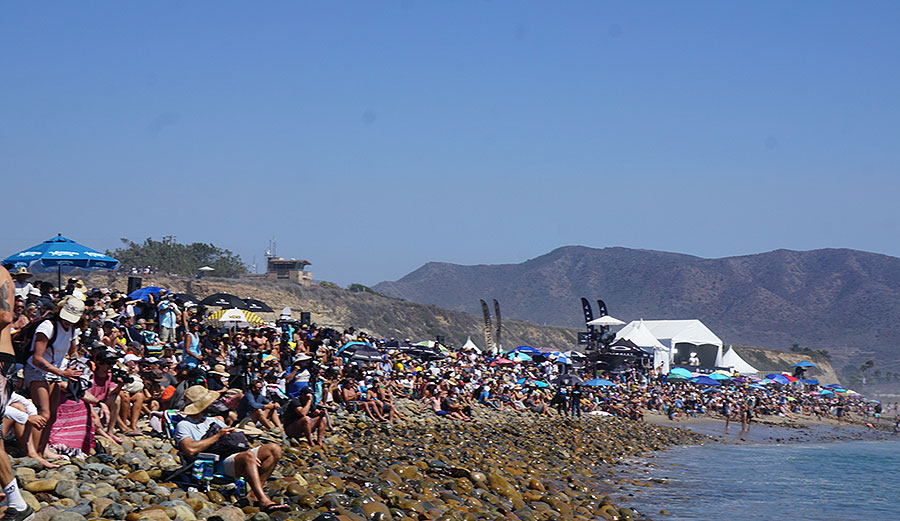 The beach was full for Finals day. Photo: Will Sileo

The tougher morning conditions showed in the heat between Johanne Defay and Stephanie Gilmore. It was difficult to make waves, with more than a couple of  slips as texture on the faces got the best of both surfers. “That was a weird and wild way to start the contest,” said Chris Cote. “I think Steph fell on every wave she rode, which I don’t know if I’ve ever seen before.” The right was especially textured, and Johanne mostly stuck to the left utilizing her powerful backhand, sending the seven-time champ packing.

Johanne then went down in the next heat to Sally Fitzgibbons, as France’s only representative struggled to find a keeper backup score. Sally was bested by Tatiana Weston-Webb, setting up a Brazil vs. Hawaii showdown with Carissa Moore. And what a title match it was. Tatiana was in powerful form following her victory against Fitzgibbons taking the first heat. Carissa then surged back, winning back-to-back heats, showing the steely nerves and magnificent surfing that has now carried her to five world championships (and a gold medal).

The men’s side started with Conner Coffin and Morgan Cibilic trading rolling outside bombs that played to both of their strengths as power surfers. “I should have ridden a thicker board,” Morgan said after he was bested by Conner Coffin in the first heat. “I’m gonna brush that heat off, improve in the off season, and hopefully challenge a bit harder for the title next time.” In the next heat against Filipe Toledo, Conner was in constant motion. He opened the scoring quickly with an 8.5. Filipe, on the other hand, only rode two waves, but both in the eight-point range. Conner’s backup score of a 5.83 was not enough. 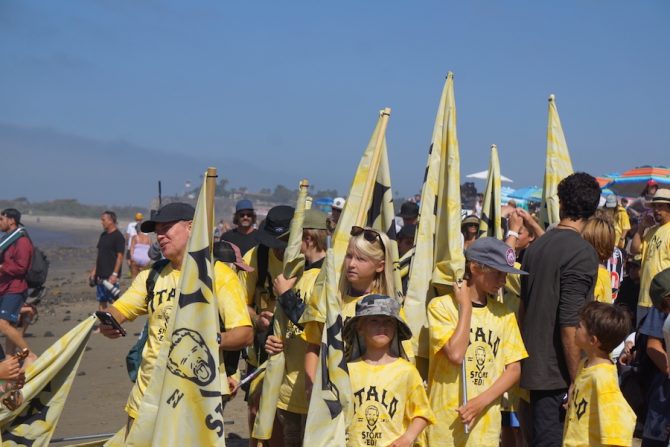 Italo’s grom squad was in full force. Photo: Will Sileo

Filipe vs. Italo Ferreira was a shocker of sorts, the first real upset of the day. Italo emerged from the athlete’s area to a full-blown grom squad in yellow “Stoke-ed” (famously mispronounced by the man himself) t-shirts screaming his name. The support, however, was not enough to fell Toledo, who was in fine form in front of the Trestles crowd. His title match against Gabriel Medina was next.

There’s a reason Gabby was at the top of the leaderboard for most of the season: he’s a surfing machine. Standing on the beach as Medina dropped air after air, and then an immaculate backflip, was nothing short of electrifying. In two heats, his ultra-reliable aerial game carried him to a third, and well-deserved, world title, despite the presence of “suspicious marine life” (a.k.a. a shark) in the water. The title match was put on pause for 15 minutes while the Orange County lifeguards shepherded the fish-of-prey out of the contest area.

“I’m surprised by how many people are here,” said Kaipo Guerrero, “especially considering how tough it is to get down here.” Tough to walk maybe, but not if you have an e-bike. The e-bike parking stretched down the beach to Church as far as the eye could see. “This is the biggest crowd a Trestles surfing event has ever seen,” came the call from the public address announcer, and with the beach absolutely packed down to the waterline, I doubt he was wrong. Few masks were to be seen, and the smell of marijuana was inescapable. “You either caught Covid or a contact high,” someone quipped.

Overall, the WSL deserves credit for running an incredibly exciting event. Conditions couldn’t have been better, and the tension and drama of a one-day surf off for the world title was unprecedented in competitive surfing. WSL officials tell us that next year’s Finals location is still TBD, leaving open the possibility that it could be at Pipe, or another dynamic location if the pandemic allows. That being said, if they plan on running next year’s finals in September, they’d be hard-pressed to find a more consistent location than Lower Trestles.