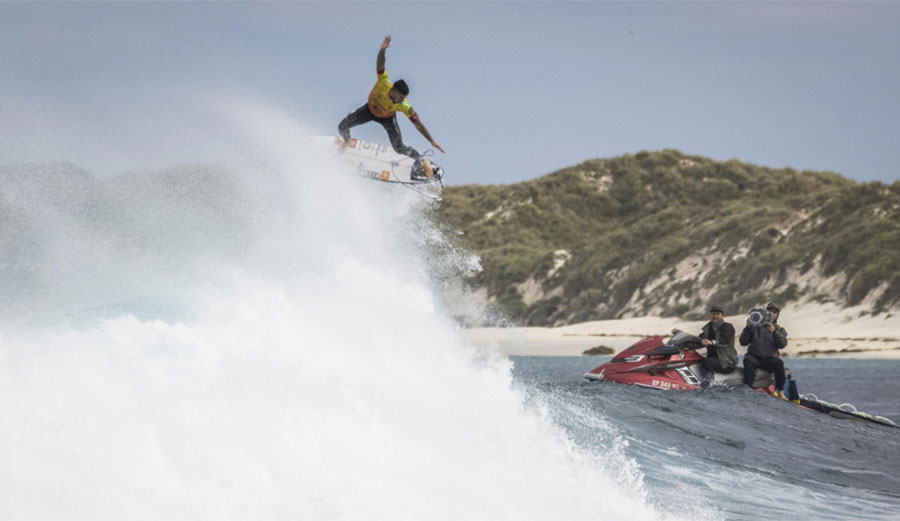 Something has changed in Gabriel Medina’s eyes. The fire is still there, but the intensity has changed. Not any less hot, but it’s less… fiery. It’s a deep coal, smoldering away, burned down after years of a blazing wildfire. He’s calmer, more relaxed, and having more fun, and it’s working for him. Coming into the World Surf League finals at Trestles, Gabriel Medina is sitting on a very substantial ratings lead: 11,740 points more than Italo Ferreira, who is in second place. For comparison, Filipe Toledo, who sits in third in the rankings, is just a little over 1,000 points behind Ferreira. That lead puts Medina as almost a sure-thing to win a third World Title at Trestles, at least in my mind. The only thing that might throw a wrench in his plans is the new format.

In previous years, Medina has received both condemnation and adoration for his winner-take-all attitude. Whichever side of the fence you might land on, you cannot deny that that attitude was a large part of what made him one of the most famous surfers in the world — and one of the most competitively successful. But this year, with the smoldering ember in his chest replacing a raging inferno, has been his best one ever.

“He wasn’t holding anything back in the water,” Ben Collins wrote for the WSL. “But on land, in the athlete area and around the event sites, this fierce competitor infamous for his enigmatic, guarded persona was decidedly stoked. Importantly, the best way to describe his new approach was that he seemed to be enjoying himself, regardless of the results.”

This season was one of many changes for the Brazilian superstar. He was a new husband, and for the first time in his long career, was competing without his ex-coach and step father, Charlie Rodrigues. Rodrigues, who has a history of… shall we say “passionate outbursts“, was replaced by Andy King.

Andy King, as you may know, is the coach who took Mick Fanning to the top of the world podium two times. Red Bull enlisted him to develop their athlete training programs, and if the results are any indicator of his methods, his methods are good. Red Bull athletes include Kanoa Igarashi, Carissa Moore, Jordy Smith, Kolohe Andino, Michel Bourez, and many more.

The changes appear to be working. If this season is any measure of what we might expect in the future, every other competitor better step up their game. Two firsts and three second-place finishes launched him up the rankings, and the wins were some of the most dominant performances seen in surfing in a long time.

“When he was on a roll in the events he won – the Rip Curl Narrabeen Classic and the Rip Curl Rottnest Search – he looked unstoppable,” Collins continued. “These were some of the most elevated, technically advanced performances in pro surfing history.”

With that dominant rankings lead, it seems almost a sure bet that he’s headed for another World Title at the Rip Curl WSL Finals at Lower Trestles. In order to do so, he’ll have to wrangle the new format, which is explained in detail here. In short, though, Medina received a bid directly into the Title Match, which is a best-of-three showdown to determine the World Champion. After the second, third, fourth, and fifth ranked surfers battle it out, the last man standing will face off against Medina. The first surfer to win two out of three heats becomes the 2021 World Champion. Given Medina’s superiority this season, when all is said and done, the safe bet is that he’ll be standing on top of the podium with a third title in his hands.

The Rip Curl WSL Finals runs from September 9-17, 2021 in San Clemente, California. It’s an historic, one-day, winner-take-all race for the World Title. Follow all the action at WorldSurfLeague.com.