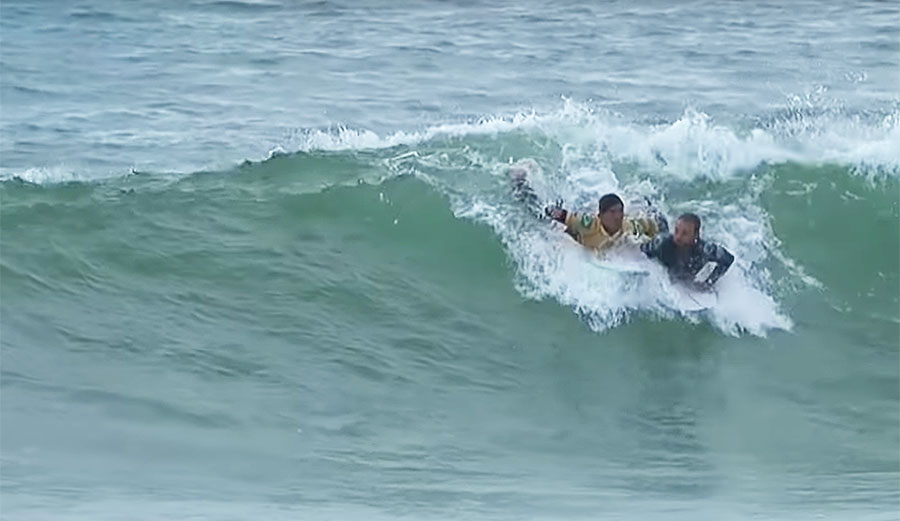 With this one screw up, the title race was completely altered. Image: Screenshot

You, like many others, may have had a hard time staying interested in the MEO Rip Curl Pro Portugal. Waves have been lackluster, to say the least, which is never a good thing in a surfing contest. But when the waves fail, there’s only one thing left to hope for: a little bit of good old fashioned drama. Which came, as it so often does, in the form of Gabriel Medina and the judges. Specifically, it came in the form of an interference the judge handed out to Medina. On first look, it seems to be an obvious mistake on the priority judge’s part, but it might not be so simple.
Here, watch this:

So here’s what happened. Ibelli had priority, then split a peak with Medina. Ibelli went right, Medina went left. Ibelli kicked out seven seconds after Medina did, so Medina got the jump on the race back out to position. Now, in most circumstances, the first one out the back is awarded priority, right? So it stands to reason that Medina would have assumed he held priority. But for some strange reason, the giant flashing light on the beach that signals to the surfers who actually has it stayed on Ibelli. Ibelli paddled into a crumbly little closeout, Medina hassled for it, they rubbed shoulders — rubbing is racing, as they say — and the judges threw the flag. It should be noted here that Medina had the heat solidly in the bag. With a little more than eight minutes left on the clock, Medina had a 14.77 to Ibelli’s 7.17.

“Caio and I caught the same wave and each went one way,” Medina explained on Instagram. “My wave was shorter and his was longer. So much so that while I was back outside, he was still riding his wave. When I got to the bottom, I was so sure the priority was mine that I didn’t look at the priority sign. To my surprise, when the next wave came, I ended up going because I was sure the priority was mine. That ended up leading to interference.”

So where does that leave us? Medina surely should have looked at the priority sign before taking off, but it seemed so obvious that he had it that he neglected to. His attempt to paddle onto the wave seemed less of an attempt to surf it than an attempt to keep Ibelli off — which, to be fair, is just smart contest surfing, similar to that time he famously burned Slater at Pipeline. “Up until that call,” Strider Wasilewski said in the post-show, “[Ibelli] was just getting smoked by Medina. He was just getting crushed.”

After the horn sounded, Medina had a few words to say. “When I got out of the water I went to talk to the judges,” he continued. “We looked at footage of the two of us paddling back out. It was very clear that I arrived well before him. And even if I had gotten out the back the same time as him the priority would be mine by the rule. Because in the wave we surfed together before, Caio had priority one. I hope my heat will be reevaluated because an error has occurred. I am still very hopeful that my heat will be reviewed.”

It’s a sticky situation. If the priority judge simply forgot to switch the priority sign, it truly screwed Medina. That interference knocked Medina out of the event, which throws a big wrench in his title race. With his exit, the race opens up for the four surfers beneath him. Since they’re all within striking distance, the 10,000 points awarded to the winner of the Portugal event will take the yellow jersey off Medina. Bad news for him, but for the surf fan who likes drama and having the title decided at Pipeline, it is fantastic news.