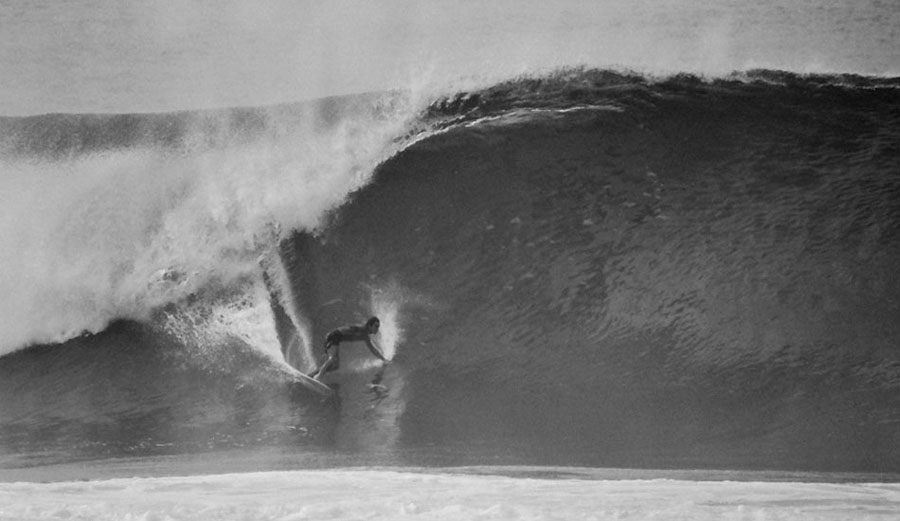 Moment: Gerry Lopez surfs the Pipeline for his first time.

On a calm morning in 1963, 15-year-old Gerry Lopez took his first tentative steps on what would become a long, winding road. He, along with his friend Tommy, were on a mission to surf Pipeline. Gerry Lopez had never surfed there before, and he was nervous. “It was a spot that, I guess, I was intimidated with at first,” he said.  “But I got to know it, and eventually became pretty comfortable there.”

There wasn’t anyone around. No one on the beach and no one in the water; the palms leaning gently away from the wind, feathering the top of a four-foot swell folding over the reef. It was the beginning of a long love affair – the first kiss in one of the most important relationships in the history of surfing.

The first few waves were a little rough – an awkward teenager fumbling with a bra strap. “I paddled for my first wave,” he wrote about the experience. “But it stood up so fast that I buried the nose of my board and quickly found myself swimming.” He and Tommy pearled on wave after wave. Lopez rode a 9′ 8″ Wardy with a 3″ redwood stringer, and it was built like a plank. The lack of rocker made Pipeline’s steep, quick drops nearly impossible, at least the way Tommy and Gerry were going about it. After a while, they gave up and bodysurfed.

Then Jock Sutherland paddled out. The goofy-footed surfer from Haleiwa, Hawaii was wearing a coconut hat, and proceeded to surf with a precision that blew the two younger surfers away. He didn’t lose his hat once. Sutherland would go on to call the inside of Pipeline tube as “the inside of the Pope’s living room.” He told Gerry something so simple that changed his life: taking off on the wave at an angle helped keep the nose of the board out of the water on steep drops. Lopez and Tommy surfed for hours using that advice. And at the time, it was just another Saturday of playing in the waves with a friend – Gerry Lopez wasn’t Mr. Pipeline yet. He was just a 15-year-old kid surfing an empty, perfect wave.