How the POV Camera Completely Changed Our Surfing Perspective 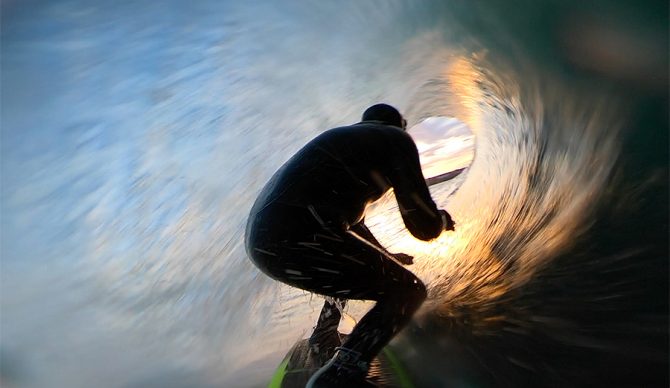 Editor’s Note: Welcome to our new series, Surf History 101, where we look at innovations in the world of surfing and beyond that changed the pursuit forever. In this edition, Sam George examines the POV camera and how it changed our view of surfing.

A miniaturized, relatively inexpensive waterproof digital camera (most famously made by GoPro) equipped with a wide-angle lens, capable of shooting both still photos and video. When mounted to the deck of a surfboard or attached to the surfer, it provides unprecedented point-of-view footage (POV).

Surfers have long sought to share their watery point of view with those on shore. As far back as 1929 the ever-innovative Tom Blake built a two-foot by two-foot pine box, glass-port housing to enclose a camera (bought from Duke Kahanamoku, no less) with which he began shooting surf action at Waikiki from the deck of his board — a perspective that would set the standard for surfing water photography for decades to come.

In 1967, pioneering surf photographer Dr. Don James mounted a 35mm camera with a fisheye lens to the tail of big wave rider Ricky Grigg’s board and got a cool poster out of it, but up to this point efforts were restricted to still photography. The real seismic shift in capturing the “feel” of surfing occurred in 1968, when the equally-innovative George Greenough, determined to capture the experience of getting “locked in” the tube, built a custom, back-mounted 16-mm movie camera rig. Although it weighed almost 30 pounds, he somehow managed to manhandle into some long barrels while riding his fiberglass spoon kneeboards. The resulting footage, featured in his 1970 film The Innermost Limits of Pure Fun, and later in 1973’s Crystal Voyager, blew minds, providing the very first glimpse of the wave’s interior from the surfer’s POV.

A few notable attempts followed, as when in 1973 Red Hot Blue director Curt Mastalka, no doubt inspired by Greenough, cobbled together a dangerous-looking camera helmet, with a small waterproof film camera attached to one side, counterbalanced by a heavy lead weight. But it was the venerable Bud Browne’s contribution in his 1973 film Going Surfin’ that would be the most prescient, sending Gerry Lopez out at Pipeline with a small, hand-held camera attached to his wrist. Because 30 years later this is exactly the device that San Francisco Bay-area surfer Nick Woodman began re-inventing in an effort to market an inexpensive camera with which average surfers could document their own surfing and that of their pals.

Called the “GoPro” (as up to this point only professional surfers were being filmed), Woodman’s brainchild was a small, “reusable wrist camera” attached with a short leash strap and loaded with 24 exposures of Kodak film. Retailing for a whopping $30, the original GoPro camera produced modest profits for Woodman’s fledgling company, and may have remained merely a toy for tourists had not several of Woodman’s friends convinced him that the future of photography was digital. This might explain the motivation, but hardly the inspiration that by 2006 spurred GoPro’s transformation from a glorified Instamatic to the GoPro Hero, the fully waterproofed, miniaturized digital camera capable of shooting both still and video, and whose introduction represented one of the greatest technological leaps the sport has ever seen. It was as if through the GoPro Hero’s tiny fixed lens, Woodman could see into the future.

Pre-GoPro, the price of digital photographic equipment had come down enough that you might be lucky to have a buddy (or boyfriend) with sufficient dedication to sit on the beach or in the boat all day so you could end up with some shaky home movies of yourself surfing. But with the GoPro Hero, suddenly everyone was a filmmaker. Granted, the initial Hero had a limited range, with no audio and only a 10-second video clip. But by the time the digital Hero 3 was introduced in 2007, with its unlimited audio and video capabilities, the ability to capture and curate the most intimate surfing experiences was in everyone’s hands — and in a lot of cases, their mouths, through the use of a rapidly-evolving range of after-market attachment devices.

The resulting footage was amazing, with never-before-seen surfing (and snow-riding) perspectives being downloaded by the day. For many professional surfers this meant that hooting after an epic tube was pretty much out of the question, with teeth now clenched firmly on their GoPro bite mounts. For the civilian surfer, this meant that for the first time they, too, could shoot and download shots of their own performances that were once only available to the aforementioned pros.

Upside: Everyone gets to see cool footage of themselves surfing. Downside: The same. Never in the history of the sport has this level of documentation, however remarkable, been possible. At the same time the idea that nothing about surfing is truly remarkable unless it’s documented has proliferated beyond the realm of brand endorsement — which explains the number of GoPro deck mounts to be found on Wavestorms. By taking oneself out of the moment, with an eye to the wave but a thought to how the shot will turn out, it could be said that a little something of what’s so special about riding a wave was lost. One big exception: the GoPro shots of 20-second tube rides at Skeleton Bay. Those are unreal.

Over the years the GoPro Hero has evolved into an amazing piece of digital technology, with the latest incarnation’s stabilization features, video time warp and live streaming capabilities. But the popularity of this miniature camera, with its tiny, unblinking eye, is more essentially a testament to Nick Woodman’s view of a future in which, given the opportunity, everyone would want to film their trip, with surfers being no exception. The fact that by 2018 an estimated 30 million GoPro Hero cameras have been sold has proven Woodman right. As was Tom Blake all those years ago, apparently an awful lot of us still want to share our point of view with those on shore.