Greg Long on Pe’ahi, Safety, and the Importance of Respect in Big Wave Lineups 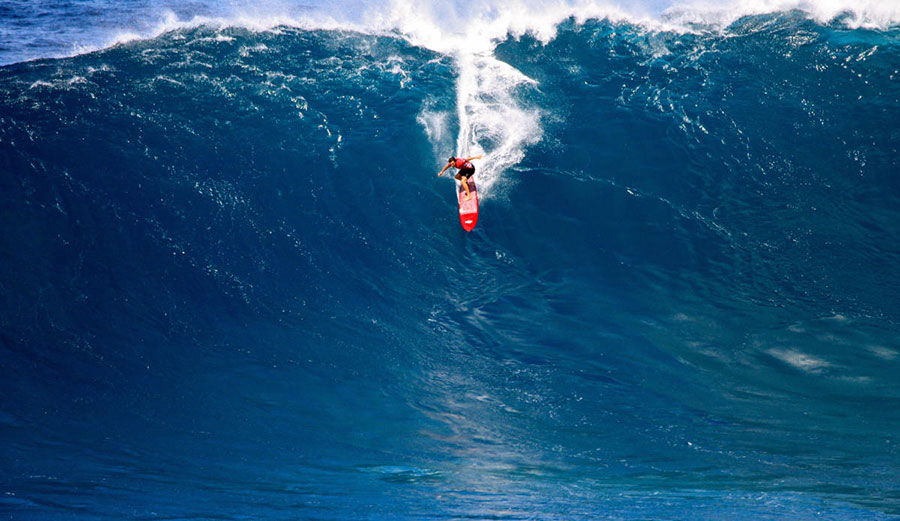 Greg Long is no stranger to waves like this. Which is crazy. Photo: WSL/Lynton

Greg Long’s been a fixture of the big wave community for a long time. His resume is a laundry list of surfing’s most sought-after awards: Biggest Paddle In, Biggest Tow-In Wave, Ride of the Year (twice over), Performer of the Year (thrice over). He’s won the Eddie. He’s won Maverick’s. He’s a BWT World Champion. He’s been the National Geographic Adventurer of the Year. And despite the fact that he’s only in his mid-30s, Greg is an idol to many of his peers. Although one might expect him to be an arrogant prick with a death-wish, he’s an extraordinarily nice guy who has put himself at the top of the big wave food chain not by taking risks, but by calculating them and putting in his time. In the dying days of October 2017, Greg paddled out for the Pe’ahi Challenge 2017–an event that was called “the best event in big wave history.” And while he didn’t win, because of his close involvement with the BWT and the fountain of big wave knowledge he possesses, he’s one of the best guys to talk to about it.

It’s a hard thing to attach a regular human being who eats and breathes and swears and stubs their toes to the person you see on the webcast surfing 50-foot waves. Quite often, superhuman feats just don’t seem humanly possible.  So how do regular humans do it? “It’s a different mindset,” Long said about what goes through one’s head while bobbing around in a lineup that could kill you. “You can embody different personalities given your circumstances.” Not everyone, however, deals with it the same way. Some, like Long, seem strangely calm given the fact that they’re waiting for a wave that could kill them. Others become adrenaline-charged fireworks. “You see the people who go out there with fire in their eyes, and just turn into wild animals,” he explained. “I feel like I’m more passive. You know, more analytical surfing, I guess. There are some people out there yelling and pounding their chest and ready to take on the world, where for me it’s more of a calculated session. You know, I do have a bit of that. There’s an undercurrent of that wild, hard-charging mentality that exists somewhere that comes out in those moments.”

That seems obvious when one looks at his 9.00 ride at the 2015 Jaws event, when he packed the world’s biggest barrel on the head. “Oh my god,” said Dave Kalama at the time. “That has got to be one of the biggest waves ever paddled into.”

Big wave surfing isn’t exactly the safest way to make a living. Compared to the WCT purses, the amount of money  BWT surfers can make in events is weirdly low–especially considering that there’s a whole more on the line. Which, perhaps, is why the mentality that surrounds BWT events seems very different than it does on the regular tour. The competitors seem to be less… well, competitive. The surfers seem to be surfing strictly for the love of it instead of the gold at the end of the rainbow. And for the most part, they are.

There are, however, a few exceptions, and that’s something that Greg takes issue with. “Everybody is friends, for sure. Unfortunately, competition can bring out the worst in people,” he said. “Not always, but it can. People, for the most part, are very respectful. There are probably four or five exceptions to that rule where all respect, all consideration for whose turn it is, completely goes out the window. They’ve got no problems catching a wave, paddling right back out, paddling around you, sitting ten feet on your inside, and doing it over and over again. That’s really hard for me.”

It is a contest, though, and as such, there is a need for hard-and-fast rules. The format of big wave surfing is still under a little bit of construction and is vastly different from a regular World Tour event. For instance, competitors don’t know their scores in the lineup, and figuring out a priority system is especially complicated. Greg, along with quite a few others, has an idealistic wish to do with the latter. “I always say ‘go off the integrity system,'” he explained. “No one’s going to shy away from that big set when it comes. If you just had one, take your turn. I would way rather maintain my integrity and the respect of my peers than to win a heat through hassling. But it’s also a competition, and I guess that’s part of the winning strategy if you want it to be. I really wish that wasn’t the case because implementing a priority system in a big wave event is going to be really difficult.”

Big wave surfing is quite often a waiting game. With massive swells come long periods, and with long periods come long lulls. Even then, when the waves do come, the consequences are far higher for surfers. But in a heat, competitors are forced to catch waves that they might not normally choose to go on. “For me, it’s about surfing quality waves,” Long said. “When I go out there in my normal session, it’s about tuning and and syncing with the energy and the waves and doing my best to read them appropriately. If I catch one or two, I’m really content with that. Most people have no problem sitting and waiting a couple of hours for those waves. That’s where the contests present a little bit of a challenge for me. You have to be able to catch two waves in a shorter period of time.”

With those risks, though, come rewards. It pushes the sport further than it might be pushed in a regular session, which in turn works benefits the surfers who place more importance on the wave than the win. But that doesn’t mean they’re not fully aware of the risks they’re taking–it’s just that the contest format can almost act as a kind of safety net. “Most of the guys know the risks associated with making a wrong move out there,” Greg said. “It’s not something you’re going to do on a regular basis because it will catch up with you. Given the competition format–there’s a bit on the line there–you’re definitely taking chances on waves that you probably wouldn’t on a normal day. That’s part of the progression of the competition format. Maybe that’s where the sport does benefit. You know, having amazing water safety and an arena of an open lineup with only a couple of guys who can really explore what’s possible. There weren’t any waves where you looked at people going and shaking your head saying, ‘that was ridiculous.'” 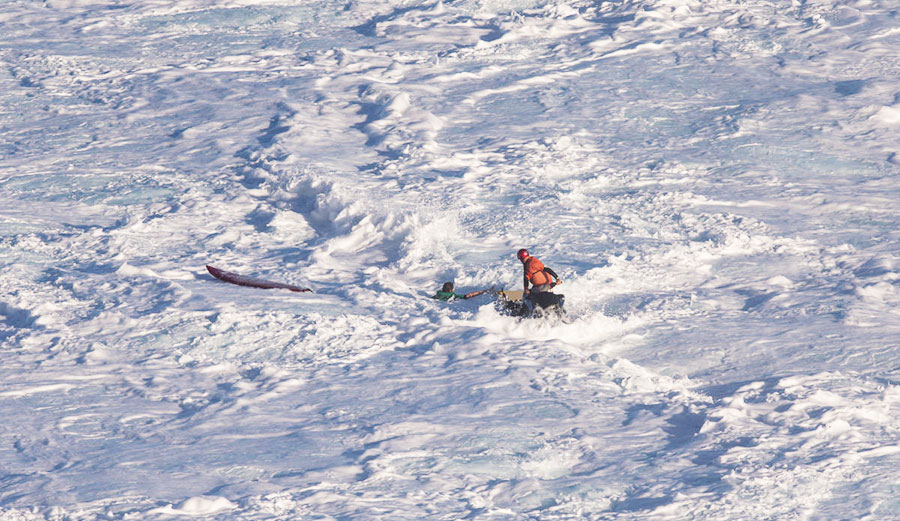 “You know, having amazing water safety and an arena of an open lineup with only a couple of guys who can really explore what’s possible.” Photo: WSL/Tony Heff

In that same vein, it opens up the doors for waves to be ridden that change the way we look at surfing. When people push the limits in a calculated way, great things happen. “You saw both sides of it this competition,” he explained. “Some of the greatest rides in history, if not the greatest–Ian’s barrel–and then those who tried and maybe ended up being five or ten feet too deep. But if they had made it, it would’ve been the greatest wave of their life. It creates a platform where you feel comfortable enough to put it on the line, but you’re not going to be doing it in an uncalculated way.”

So what does the future of big wave surfing in a contest look like? Would, for instance, giving the surfer the ability to see the score they need take away from what big wave surfing is all about? Kind of, at least according to Greg. But it’s a little more complicated than that. “There’s just so many questionable variables,” he said. “It’s not as black and white as it is in a regular world tour competition in smaller waves. In a heat where say, all you need is a 2, you can go inside and drop in on a little wave on the corner and get that. If you don’t know that in a heat, you’re just out there surfing the biggest and best waves that are coming in. I think if you knew the scores, though, that would only exacerbate the hassling and sitting on your competitors. There’s a part of me that isn’t bummed that that’s not out there because that’s going to turn it into even more of a cutthroat competition.”

Even if there is a part of him that seems a little conflicted about how big wave surfing fits into a contest format, he’s excited about the prospects and sees the need to figure it out, and, along with the BWT, is doing just that. Already, they’ve implemented a few different things like doubling the score of surfer’s best wave and a tiered system called the Wave Coefficient, where each event is assigned a varying amount of points depending on the conditions. And their ideas working. The Pe’ahi Challenge 2017 is being lauded as one of the greatest events in big wave history. “I would say this is right up there,” Greg answered when I asked him whether he thought that was hyperbole. “The only other contest that would compare is the last time the Eddie ran, but Jaws is a completely different type of wave. Just what it has to offer–you know, the barrel of a lifetime, the intensity of it. It definitely kicks it up a notch.”

With his long involvement on the big wave scene, Greg’s become a godfather sorts. Spending a lifetime dedicating oneself to the singular pursuit of chasing massive waves will do that to a person. He’s aware of his status and relishes the idea of passing on what he’s learned. “In and around the big wave community, I’ve put all my energy from basically 15 to 30 years old,” he said. “My first competition, I was 19 years old, and I’ve done my best not to miss one ever since. With that time and experience in the lineup, there’s a wealth of knowledge that other people kind of look at for inspiration. I had my mentors; guys who are really smart, passionate, and thoughtful, like Mike Parsons, that I looked up to. If that’s the case, then I’m really flattered. I’m just lucky that I’ve had people who’ve shaped and molded my outlook on life. Hopefully, I’m a positive example for those who come after me.”