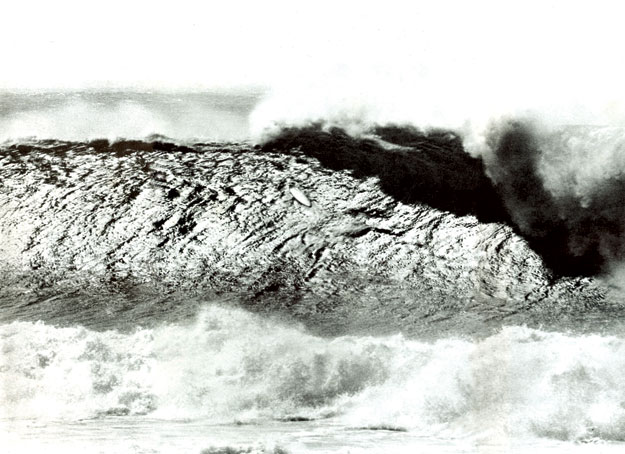 Falzon says this wave occured after Noll caught his and was washed in at Makaha. According to Noll's versions of events he was out there alone for 30 minutes or an hour waiting for that famous wave. Photo: Alby Falzon

You also get a real sense, reading Noll’s book, that he belongs to a different era. Surfers rode boards that today’s grommets wouldn’t be able to carry – let alone ride. Story-telling happened around a fire and involved culinary expressions like soup and hotdog. No one expected the tales to be taken as gospel down the track. Myths, rumors, and hyperbole added to the appeal of guys like Dora and Da Bull.

There’s a great quote by Ricky Grigg in the Noll book. “The heart of the story about our years of surfing is the emotion we share. It’s like old bullfighters getting together. What’s important is not how fast the bull is running; it’s how it feels when it misses you by an inch. That’s the story isn’t it?”

Randy Rarick was at Makaha that day too, and his account differs significantly from Falzons (and from his own original account which appeared in Surfing World in 1970). He recalls that only three people surfed that day and that Noll was the only one who caught waves. He estimates Noll’s big wave to be around 20-25 feet (back in the day he called it “easily 30 foot” and there were at least six guys out). “By the standard in those days was considered very big for paddle-in waves. You have to remember this was before tow-ins, and, other than what had been ridden at Waimea, this was considered the upper realm for its day.”

He’s familiar with Alby’s photos but says they are of the smaller wave Noll caught that day.   I sent the third photo of the sequence through to Randy, and he changed his mind and conceded that it is of the famous big wave. Perhaps sensing my next question Rarick offers this. “As the years have passed, the essence of what he accomplished in 1969 have made that wave grow in size and stature”. He later suggests the photos have been overlooked by surf mags because of their quality and because they “don’t look all that impressive.”

Certainly, they are not as impressive as the illustrated depiction in Riding Giants. Or the Ken Auster painting that appears on the back of Noll’s biography.

“Riding Giants really gave me the shits when it came out,” says Alby. “The way they all talk up Greg’s ride and push him further up the pedestal. And they say there’s no footage of it. I’m looking at it going: that’s bullshit. Stacy Peralta expanded the myth. I emailed him the shots and said this is bullshit. He wrote back and said well maybe it wasn’t his big wave. And I went, well, you weren’t there and I was. I stood there all day and watched every ride or filmed it. That’s the way they kind of cover it up – “Oh, no you didn’t actually get his big wave.” A few people have said that. And I go, yeah right (cracks up). There’s no need to be disrespectful to Greg. I think he’s a great big wave rider but I just think the mythology… I just think it’s bullshit if people trade on untruths.”

I ring David “Baddy” Treloar to see what he makes of all this. Treloar was 18 when he shacked up with Falzon and the Tomsons at Makaha in ’69. It was the first trip to Hawaii for Treloar, who would go on to feature in Falzon’s most famous film, Morning of the Earth. Treloar makes it clear how much respect he has for the surfers who pioneered the North Shore.

“Those guys were like 6’5 lifeguards chiselled out of fuckin’ stone. People don’t realize those guys were serious watermen. They were like something out of muscle magazines. So those guys were fit and they were mad. There was no fat guys paddling out at Waimea for the first time I’m telling ya.”

When we get to the photos he has an interesting perspective. ‘I know what you’re saying, because I’ve seen photos of Noll at Waimea that look bigger or of Pat Curren on some monsters from earlier in the ‘60s. But if Noll says it’s the biggest wave he’s caught, well, you can’t go, ‘No it wasn’t, Greg, you caught a bigger one at Waimea.’ That guy’s not talking himself up. You seen the footage of him surfing Third Reef Pipe that day? Fuck! Fuck! It’s twenty foot Pipeline! So if Noll’s saying that’s the biggest wave I’ve ever surfed then you go okay, Greg, that’s good enough for me.”

It’s a fair point. There’s a difference between observing and participating when you’re talking about 20 foot waves. Noll has never called it the biggest wave ever ridden. Only the biggest he’s ever ridden – a claim he’s uniquely qualified to make. Besides, even without the embellishment factor, the unreliability of memory and the haze of time, wave heights are debatable.

But Treloar’s comment also demonstrates how difficult it is to be objective about a person you admire. And this is central to the recent debate in the media about wether surf writers are too close to their subjects to be objective. If photos of a milestone wave like this have been ignored for 41 years because they take the shine of a really great story it doesn’t exactly instill confidence in the reader.

I ask Treloar what he makes of the Riding Giants version of history. “Listen, it doesn’t matter what bit of surf history you’re talking about or who’s writing it. Stuff gets said that just didn’t happen. Surf writers only write in books what they’ve read in others because there was no way they were there at the time. It pisses me right off.”

For his part, Alby is just annoyed to keep hearing that his photos don’t exist. Clearly they do. And he has no doubt why it happens. “People bury it. I think they respect the Bull and want to keep the myth alive and let Greg have his 15 minutes of fame at Makaha.” But even Alby concedes, “myths make surfing more interesting. The mythology of surfing is part of the history of it in a way.”

This article was originally published in the March 2011 edition of Tracks Magazine.