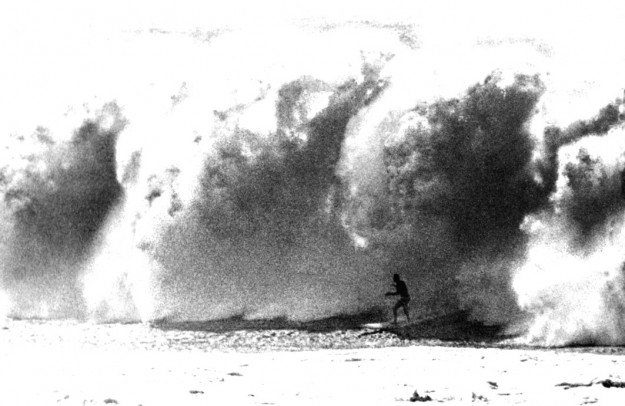 It’s a sentiment that has been enthusiastically shared in numerous articles, books and films about the early days of big wave surfing. Which kind of makes Albie Falzon the fly in the ointment of surf history. Because he remembers the day differently. And he has the photos.

“I watched the whole unfolding of that day – all the surfers arriving and paddling out, right up until the last guys were washed in when it got really big. I was on my still camera when Greg took that wave. It was a big wave, but other waves were ridden that day around that size. Once it started jumping there wasn’t any small waves. If you were going to catch something that day it was going to be a really big wave.”

“Greg’s dropped down waves at Waimea that were bigger,” says Falzon. “And not only that but much heavier waves too. Makaha is a heavy wave, but it’s no where near as heavy as Waimea. It’s more a wall; you’re not dropping down into the bowl at the last second and freefalling out of the lip [like at Waimea]. You can actually set yourself up on it a bit more.”

“I’ve got another shot which shows you the magnitude of the swell,” Albie continues. “When it peaked it was just ginormous. Two guys were still out there [after Greg had caught his wave and been washed in]. I’m not sure who they were. They were riding these giant rhino-chasers and there’s a shot of the first guy getting cleaned up and there’s a shot of his board going over this wave as it’s lipping. Even by today’s standards it’s a gigantic wave. The lip is bigger than the board. And it’s an 11-foot board. The difference between the photo of Greg on that wave and the clean up wave…. There’s a real big difference.”

And then there’s the footage of this supposedly undocumented day. Albie’s 16mm film was released in the early ‘70s in the Bob Evans film, Splashdown. Although Falzon didn’t film the famous wave (because he was shooting it) he suggests Ernie Tomson might have caught it with an 8mm camera. I email the 1977 World Champion, Shaun Tomson, and he responds. “I have the wave on film, but Greg has asked me not to release it so I haven’t. Alby Falzon was also there and took a still shot of the wave before it hit the bowl so if he’ll give you the pic you’ve got a 41-year-old scoop, pal.”

Greg “Da Bull” Noll’s reputation as a big wave surfer is unassailable. His big wave exploits in the fifties and sixties are well known and unsurpassed. He led the charge to surf Waimea Bay, a terrifying, life-snuffing arena in which he would excel for well over a decade. In 1964 he made history by surfing enormous outer reef Pipeline. The John Severson photo of him standing on shore that day in his jailhouse trunks with a mountainous wave swallowing the horizon is one of the most iconic images in surf photography.

But it is also true that Noll had a reputation as a showman and a self-promoter. Former Surfer editor Sam George argues that this was part of his appeal and that surfing benefited as a result of his celebrity. “Surfing needed him,” George says in Riding Giants. “When you look at those surfers [big wave surfers from that era] they were a stoic bunch. Greg Noll introduced flamboyance. He introduced colour.”

Later in the film, George makes this observation about the Makaha wave. “Even though it wasn’t photographed. Even though people have since then asked – how big was it really? – it doesn’t matter. In our imaginations it just was HUGE. Because on this classic day, the biggest swell ever seen, he essentially rode alone and he faced what came to him. And that’s what every surfer does in their own life.”

So does it matter? Is surf history more about getting the drama and sense of the occasion right than the specifics? Terry Fitzgerald’s recent plea at a Bells Beach media function for the surf media to “research the facts and tell the truth” suggests that this is a contemporary issue. It’s a criticism that has been echoed by new media commentators like Lewis Samuels (of postsurf.com infamy) who feels the surf world has “insulated itself from criticism in a self-congratulatory bubble”.

Harsh words. But if they sting, it might be because they orbit close to the truth.

It’s worth noting that Falzon hasn’t exactly been sitting on the photos. They ran in Surfing World in 1970 and as part of a Falzon retrospective in the one off Andrew Kidman edited magazine Litmus (1996). If you missed it in those publications, the photo that doesn’t exist hangs in Torquay’s Surf World Museum for all the world to see (and measure). It sits next to a photo of Noll surfing what appears to be a bigger and considerably heavier wave at Waimea.

When I saw the Makaha photo in the Torquay museum last year I dragged the curator, Craig Baird, over for an explanation. “This is can’t be the famous Makaha wave,” I told him, “because no photos were taken of that wave.” Baird seemed to understand – and perhaps even enjoy – my confusion. “But I thought… and in Riding Giants… and in all those articles.” He nodded kindly.

I sat on the story for a while, read Noll’s biography and decided I like him immensely. It’s not just his big wave feats or that he engenders so much respect from so many surfing greats. It’s his emotional connection to the ocean and to riding waves that sings for me. For such a street-fighting, Waimea-charging hellman, Noll has a really romantic take on what it is to be a surfer. He describes Waimea as his gal and laments that as he gets older, she stays beautiful and young.

I approached Noll about the discrepancy, and he declined to comment.