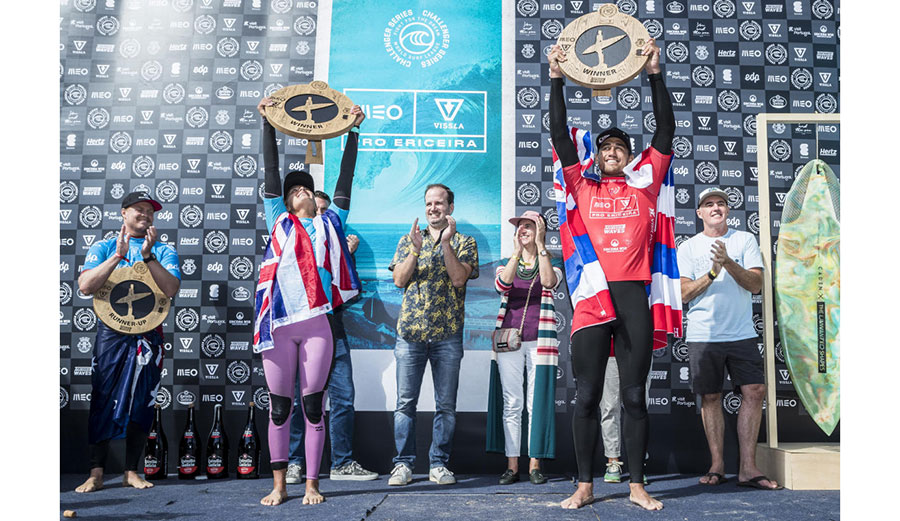 Lau, who is fresh off — in television time, at least — a win on ABC’s The Ultimate Surfer, is now squarely on top of the rankings. After finishing in ninth place at the US Open in Huntington Beach, the win in Portugal catapulted him into first. Lau, who is perhaps more committed to returning to the 2022 Championship Tour than anyone else in the Challenger Series, also has three wildcards as a result of his reality television win.

Lau’s performance in Portugal was reminiscent of his previous contests, not to mention his reality television performance. Un-blinking and driven, he steamrolled through Nat Young on finals day, who is the only competitor who might be as driven as Zeke to return to the tour.

“Falling off Tour a couple of years ago, I’ve been working so hard ever since to just get back and winning here feels amazing,” Lau said. “I knew this was going to be a good event for me, so I focused in on it. I trained long and hard for it, so I’m just really stoked and just want to thank everyone that has helped me get to this point.”

For Luana Silva, the win also puts her in a good position to land a spot on the CT next year. The women’s final might have been the most exciting heat of the event. As soon as the horn sounded, Silva and her competitor, Gabriela Bryan, put down high scores. At the ten-minute mark, both were sitting on scores that, in most other heats, would be an easy win. Bryan had a combined wave total of 17.13 while Silva had a 16.13. One of Silva’s waves was a 9.80, and her momentum seemed high. But for the next 20 minutes, she struggled to find a wave. With only 15 seconds left in the heat, Silva finally stroked into the wave she needed. The judges awarded her an 8.23 and the win went into the books.

“I have no words right now I’m so happy,” said Silva, tears in her eyes. “I knew it was going to be tough that Final against Gabriela, but I just waited and finally got my chance. I’m stoked I managed to showcase my surfing.”

The second place finish for Gabriela Bryan only adds to her enormous ratings lead. She also came in runner-up at the US Open.

“I surfed the best I could and I’m really happy with this,” Bryan said. “That last wave came to her and there’s nothing I could have done unfortunately. I’m going to give myself a chance in France now and I’m really proud of myself for being consistent.”

The next event on the 2021 Challenger Series is the Quiksilver and ROXY Pro France at Les Culs Nus beach October 16-24, 2021. Watch it LIVE at WorldSurfLeague.com.