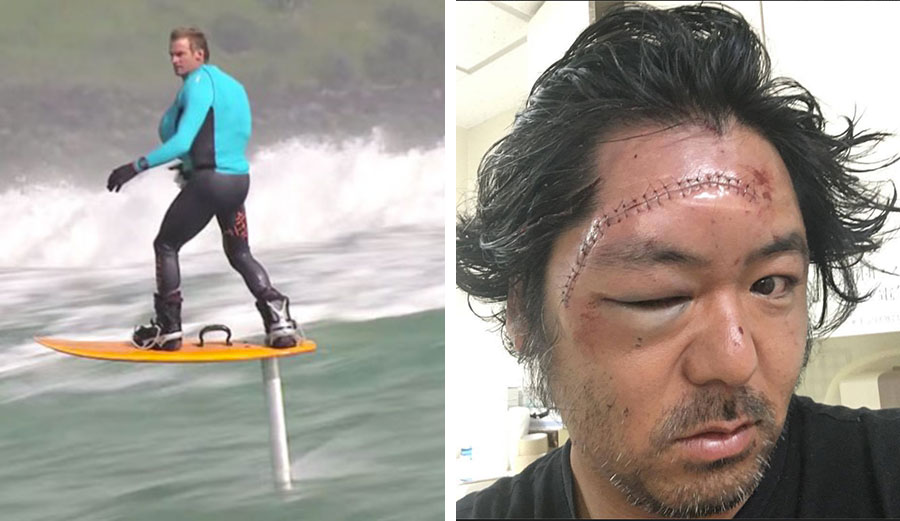 Laird Hamilton, a few years ago on a foil. Recently, a Japanese surfer found out just how dangerous they can be. Photo (R): Facebook/Jamie Mitchell

Years ago, Laird Hamilton showed up on the scene with a foil board. It was weird–strapped into a board with snowboarding boots, Laird floated around on a contraption that will probably never become all that popular. Then, it seemed as though it kind of went away… until Laird showed up in Kauai and New Zealand riding them again. Although the technology is in no way new (people have been using it for years), it was Laird that brought it into the surf public’s general perception. Since then, every now and then someone gets on one for a little while, someone takes a video, and the internet loves it for a minute.

Then, just a little while ago, Kai Lenny became the newest big name to really begin experimenting with them. He started downwind paddling, pumping back to the lineup, and generally finding strange, fun, new things to do. Here’s the thing about foils, though: they’re really, really dangerous. Much more so than a regular surfboard. The already-dangerous, largely unregulated crowds riding different equipment is becoming a real problem, and in the hands of an unskilled rider, foils pose a greater danger than most other surf craft. A few days ago, Jamie Mitchell dropped a Facebook post about the subject. With it came a photo that illustrates just what can happen when a face and a foil collide. After Japanese surfer Yu Tonbi Sumitomo picked up a foil, things went very wrong. Below is Jamie’s unedited post.