Hunter Jones Was the Best Thing Hannah B. and The Bachelorette Had Going 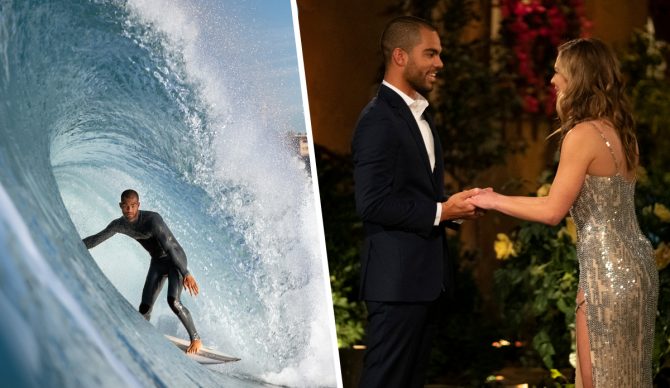 In a short time, former WSL-employee-turned-pro-surfer-entrepreneur-turned-Bachelorette-contestant, has become one of our favorite Los Angeles surfers. He’s just a good dude. Not much else to say there. So we were thrilled when we heard he’d be appearing on ABC’s mega-franchise The Bachelorette. They should be so lucky. We were certain that he’d go the distance and/or become the next Bachelor. Perhaps, the latter still might become true. Who knows? But the windfall vanished as quickly as it appeared when Hannah Brown sent our guy home on night one. Ugh. We only saw Mr. Jones on screen for a few seconds, and, collectively, we were left scratching our heads. I’m certain Kelly Slater, also a voracious Bachelor fan, was bummed. Surely, Ms. Brown’s judgment must stand trial. In our conversation, Hunter gives her the benefit of the doubt, which just reinforces her egregious error. Anyhoo…we were pumped to catch up with Hunter to get a behind-the-scenes look at his time on ABC’s The Bachelorette.

Hunter! You ready to dive into some Bachelor Nation?

Okay, so we all know that you tragically and unjustifiably departed on night one of the Bachelorette. But how long did you spend there total?

I was a part of the whole experience for…I guess we could call it six days. It was five days we were in a hotel, and we were shooting some promo stuff, getting prepped, and meeting the producers and getting updated on workflow and how everything would go.

Yeah…what the heck. You were the best thing this franchise had going for it. They don’t even know. What’s going on here? What do you think ABC and Hannah have to say for themselves?

Yes. What do they have to say for themselves? Hannah, ABC, and the Bachelorette franchise have just continued along with their lives thinking they’re making entertaining programming for the masses, but they just totally blew it, and they’re oblivious to their mistake. This is absurd. They don’t even know what they’ve done.

Well, I appreciate that. I think they blew it, too (laughs). I would have loved to be a part of it a little longer for sure. My plan was never to go home night one, and it’s funny because in one of my interviews with them they asked me my worst fear. I said one of my worst fears was to go home on night one…and it came true (laughs).

I don’t know. I wish I had longer. I thought I was going to make it, you know? The night went good. I thought my conversation was good. It wasn’t the longest one on one time with Hannah, but I thought it went good. I guess she had a different idea, which is totally fine.

Yeah, she wasn’t the right girl for you. I would have supported it, if somehow miraculously you fell in love. Sometimes people aren’t meant to be together, and that’s okay.

Everything happens for a reason. I’m totally okay with that, and I’m sure she’s gone on to meet all these other guys, and she’s going to find the one.

So did you really go on the Bachelorette and think you could fall in love and get married? Like for reals?

Honestly, I didn’t doubt it. I felt like I was in a good time in my life. I’m single. I’m in my mid-20s. My best friend Easton just got engaged, and all my friends are kind of in this season, and this opportunity just fell into my lap, and I was open to it. As you know, I just quit my job at the WSL to pursue my own career in acting and creating videos, and it all just kind of happened at the right time. I’ve always been one to just go with the flow of things and do what I feel is right, and this was an opportunity I couldn’t pass up, so I was excited to give it a try.

I saw you on your Instagram watching that episode with your family, and I feel like that’d be really awkward having your friends and family all watching you trying to get a girl. Was that awkward?

It’s so funny. I was out to dinner with my friends, and they were like, “Dude, we’re super bummed you got cut on night one, but we didn’t really want to see you making out with someone on TV.”

It was funny watching it with my family. I was happy with how everything played out on TV that night. I thought I did good, and I thought everything worked out. It’s funny. I was ready for that whole opportunity to pursue a girl on TV, I guess, and see where that would have taken me. It’s all part of the game, I guess.

So…you’re a bit taller than me. And I’m a little fella. Like 5’ 7.” But the guys there seemed very tall – like much taller than you, from the screen time I observed (Hunter asserts that he stands a respectable 5′ 11″). What’s going on there? Were all those dudes giants?

Yeah, there were some giants. One guy was like 6’ 6” or something. He’s the one who hopped the fence. I’m not a short guy, but I definitely wasn’t as tall as the other guys. 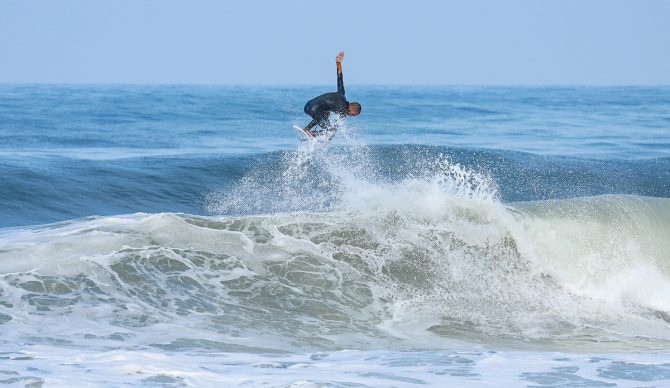 So the best surfers, according to our examination of WSL stats, average about 5’9”. Do you think surfers can excel on the Bachelor? Or is this a tall man’s game?

Ha. I think it’s a tall man’s game, because you have to stand out, and if you can look over everyone, you might get more camera time. I was always stuck in the back, so if I were a couple of inches taller, I might still be on there.

Had you followed the show for a long time?

I will admit it. I’ve been watching the show since Junior High. I follow the show. I watch every one of them. I watch Bachelor, Bachelorette, Bachelor in Paradise. I’m pretty well-versed on the show, which is the craziest part of the whole thing – actually getting on. After seeing it for years, it was a completely surreal experience.

Did you make any friends on the show? Or is this whole venture pretty far in the rear view?

I definitely made some friends. Peter, the pilot, who I think will go far, we were actually in the limo together, and he was super rad. I actually have a little group chat going with all the guys who were eliminated on night one. Ha. We keep in touch, and we have that in common, but I didn’t get to know that many of them. I was only on for a day. Ha.

You gotta give ‘em hell in the tell-all!

So…is Bachelor in Paradise in your future? Remember Grocery Store Joe, who got cut in the first episode? He returned with a vengeance to become a Bachelor Nation favorite?

Who knows? I’d definitely be open to the opportunity. Maybe that or who knows, maybe you’ll see me on Dancing with the Stars or something?

Are you going to continue to watch? Did you watch the most recent episode? Are you glad you were spared from shakin’ it around in a Speedo?

I didn’t watch yet. I’m going to watch it today. I did see some guys walking in Speedos, so maybe I got saved from that.

I was wondering. Maybe you got spared. At least from episode two.

It’s okay, I would have been willing to do it just to give it a try.

Gosh. It was really fun. I don’t have any regrets doing it. Hannah is super nice, and I don’t know what the media makes her look out to be, but from the time that I spent with her and getting to know her from that little portion, she’s actually really rad and really respectful and I wish all the best for her.

And if any contestants on the show want a surf lesson, you can hit me up.

There we go. They should be so lucky! Get ‘em on the HJM model. Get Ryan Harris up in there shaping customs for Bachelor Nation.

There we go. Then we’ll post it on The Inertia.

Deal! Let’s get you on Bachelor in Paradise, STAT! 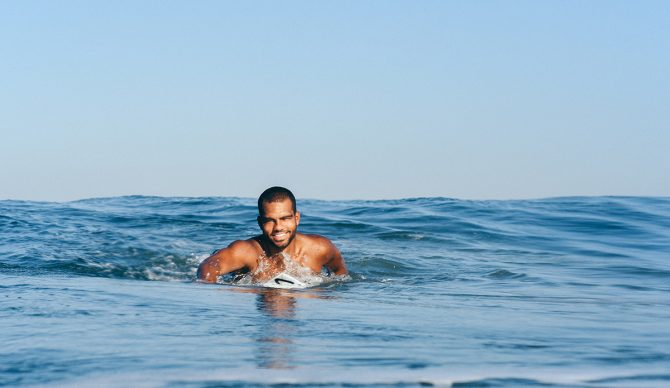