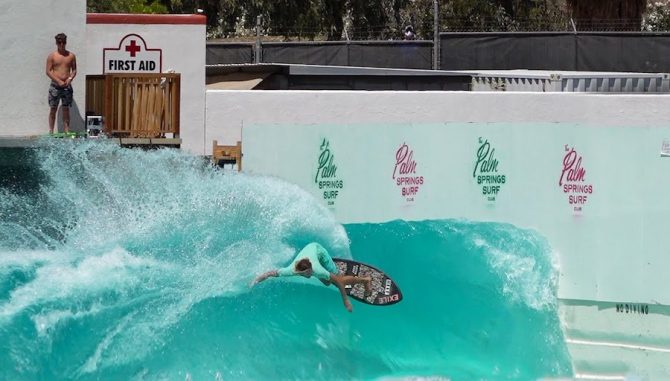 This might change everything. A ‘Fully-Nuking’ Palm Springs Surf Club. Photo: BeefsTV

It is impossible to avoid clicking around any surfing website or social media account without diving into a wave pool? And for good reason – they are surfing’s industrial revolution. A world-class wave can now be manufactured with astounding efficiency. The BSR Surf Park in Waco, TX boasts production of 120+ waves per hour. Lower Trestles is consistent, but not 120 WPH consistent. The future is now, and everyone seems eager to take part in surfing’s newest innovation.

But I initially wanted nothing to do with these wave-generating robots.

To be clear, I never had anything against the waves. The United States’ two most prominent facilities, the WSL Surf Ranch in Lemoore, CA, and the aforementioned BSR in Waco, appear as advertised: world-class. Everyone wants to ride them, but not many people can afford to do so. Access to Lemoore will set you back roughly six month’s rent and BSR, while affordable to surf, involves flying to and staying in Waco, Texas. I could justify shelling out some cash on a vacation to an exotic locale for amazing surf, but vacationing in Waco, Texas? Birthplace of Dr. Pepper? Home of the world’s largest Snicker’s bar? Nah.

This gave the wave pool experience an air of exclusivity. These were not waves for the working-class chump. If you wanted to be a part of the latest fad, you needed to either have gobs of money or be well connected. Otherwise, the closest you will get to manmade perfection is staring at edits through the Gorilla glass on your phone.

These are country club shenanigans. Surfing is already rife with elitism, and these wave pools were threatening to make matters worse. I feared that surfing’s real innovation was creating a posh experience for the pro or executive, ignoring the everyday surfer.

Then the Palm Springs Surf Club burst onto my social media feed, with neon Catch Surf boards blazing. The recent Beefs TV edit portrayed a dream scenario of surfing great waves, having a blast with friends, and washing it all down with sunshine and beers. I am a sucker for good marketing, and this casual cast of characters drew me in with the exact type of enjoyment I wanted.

And then, like a bucket hat-wearing beacon of hope, Simon Rex appeared with mock commentary to cement a message: This isn’t a country club. This is fun. And, also, your surfing sucks.

These were grounds for excitement. Palm Springs is widely accessible, being a roughly two-hour drive from the country’s largest concentration of surfers in Southern California. A trip to the Coachella Valley is quicker than going down to Baja – especially if you factor in the slog of crossing the border back into the States. Plus, the local officials in the desert are pushing for this to be affordable so the maximum amount of people can be stoked. Palm Springs Planning Commissioner, Maria Song, brought the noise (per the Desert Sun):

“It would be a pity if you ended up making this a resort, and it’s not affordable for people who really need to be exposed to different kinds of sports and activities,” Song said.

While the pricing has yet to be finalized, PSSC appears that it might be an affordable, accessible, and shreddable wave located in a resort town. That is the dream for the working-class wave pool enthusiast. The Palm Springs Surf Club has positioned itself as an experience everyone can enjoy, and from a sport that constantly judges you because of where you grew up and questions how “core” you are, that’s refreshing.

Making a wave pool mind-blowingly fun and attainable has got me fully on board the mechanical surf hype train. I eagerly await the moment where I can drive through the scorching Imperial Valley to discover the oasis that is the Palm Spring Surf Club’s shores. It’s time to buy a bucket hat, because I’m a pool boy now.