Is Adriano the Least Respected World Champ Ever? 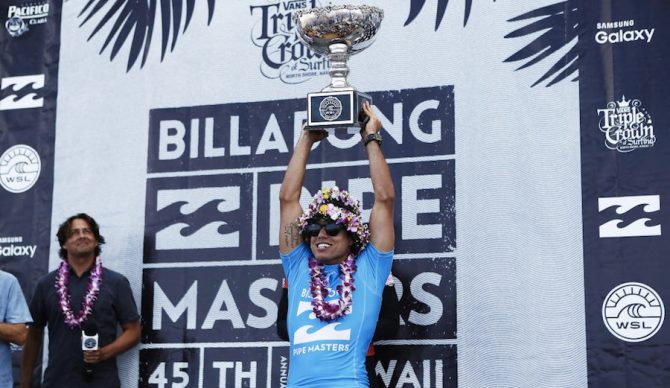 Never has a reigning world champ commanded such little respect. But why? Photo: WSL/Kirstin Scholtz

Three contests remain to determine the 2016 WSL world champion. The top 5 going into France are John John Florence, Gabriel Medina, Matt Wilkinson, Jordy Smith, and Kelly Slater (in that order). And while some might argue a world title may not necessarily indicate the best surfer in the world at any given time, the fact remains that a title commands respect, or it should anyway.

The subtext of Adriano’s moment was clear – most (at least through the lens of American and Australian media) were rooting for Mick. The Inertia‘s founder, Zach Weisberg, confirms as much. “Nobody wanted to write about Adriano today,” he said following Adriano’s win. “Mick was the story.”

It was the come from behind, against all odds victory that never was. Mick had lost a brother the day before the final, and earlier that year was attacked by a Great White shark – the video of which quickly went viral. A Cinderella story if Cinderella already had three glass slippers.

So when Adriano proved victorious, the surf world collectively sighed. Zach’s article goes on to point out that Adriano’s narrative is just as compelling (perhaps more so) than Mick’s. Adriano lost his beloved friend, Ricardo Dos Santos, and his brother Angelo purchased De Souza his first surfboard for seven dollars. Not to mention, Adriano comes from a background with limited economic means, and does not enjoy the same financial backing from major sponsors that most world champs do.

In an interview with Surfer, Adriano explained that when he decided to stay at Jamie O’Brien’s house for the North Shore season to train at Pipe it came from a desire to work hard and because he was low on options. “I wanted to stay at Jamie’s house so I could be right there on the beach at Pipe for the whole season,” he said. “I knew that only Jamie could help me do that, since I’m not sponsored by brands that rent houses along that stretch.” He explains that he basically knocked on Jamie’s front door and begged him to stay there.

But the lack of veneration of Adriano wasn’t unique to this world title race. Apart from racist remarks that the majority of Brazilian surfers have been forced to deal with over the years, Adriano has been particularly singled out for everything from his showmanship, and perception as a claiming braggart, to his stature. The Encyclopedia of Surfing goes so far as to claim that by 2010, De Souza was the world’s most villified surfer. “De Souza rankled some fellow competitors, and a good portion of pro tour fans, by often celebrating his own rides with raised arms, hand claps, and self-amazed facial expressions,” says the entry on Adriano. “Opinion was divided as to whether he was just showboating, or trying to elicit a higher score from judges, or both.”

And it’s worth noting that even since winning a world title, things haven’t changed much as far as sponsorship deals and financial support is concerned.

So I feel for the guy. I really do.

Adriano was the first to admit that, after being crowned world champ, he was not the best surfer in the world. In an interview, he claimed that honor belonged to John John. Not only should that level of humility dispel any thoughts that Adriano is any kind of claiming narcissist at heart, it also illustrates an important point. Perhaps the most important.

Unlike the John Johns, Medinas, and Slaters of the world – who dazzle the crowd with huge airs, and innovative antics – Adriano grinds. His surfing isn’t dramatic, it’s pragmatic.

As a surf fan, I often find myself confusing scoring with the ability of a surfer to entertain. But, really, only a handful of surfers on tour have enough flair to meet the criterion to get scores and go for broke when it suits them. For others, they get the score they need to move on to the next heat. If that means behaving as if something is more impressive to influence scores, hell, do what you have to do. And that’s Adriano.

His win, in my mind, shouldn’t command less respect because it was less entertaining. Really, it deserves more. In spite of a lack of a natural ability to perform incredible feats, Adriano beat out the rest. He had to stretch his talents further, work harder, and focus on the game of it all perhaps more than anyone else.

Maybe it’s time to rethink prejudices, stereotypes, and misgivings surrounding the reigning world champ, and give him the respect he earned fair and square.

Correction: An earlier version of this article stated that Ricardo Dos Santos purchased Adriano his first surfboard. In fact, it was Adriano’s brother Angelo.