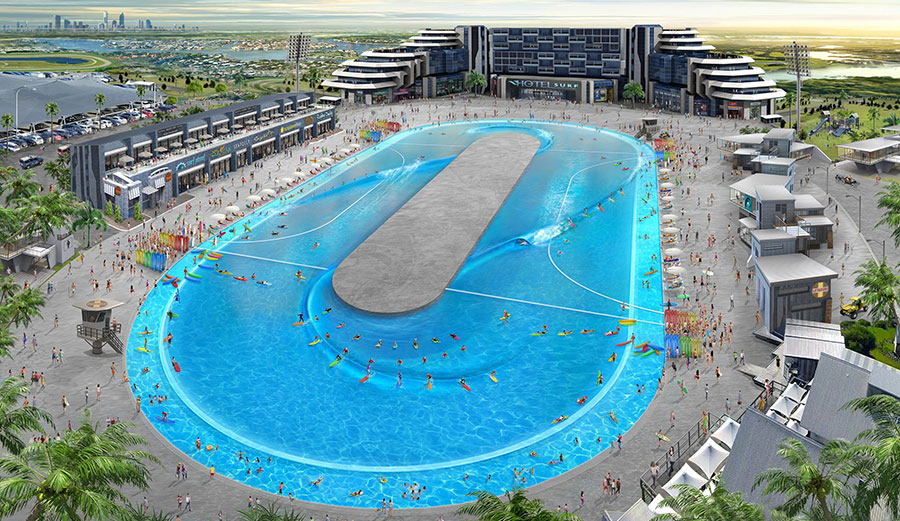 An artist’s rendition (another one) of the Webber Wave Pool. Image: Webber/Ocean Sports Development

If you’ve been following the wave pool saga over the course of the last few years, you’re aware that there’s one that’s been hyped to the moon. Unfortunately, it’s never actually lived up to the hype with an actual wave pool. It’s the Webber wave pool, and the Webber team has been dropping hints for years, promising a man-made wave far superior to any wave so far.

First, there was WaveGarden, which is used in pools like Austin, Texas’ NLand. Then there was Kelly’s wave. Then American Wave Machines threw their hat in the ring and created the Waco pool. With each new technology, there comes a new shout from the Webber camp. “Just you wait!” they yell. “Ours is better!” The problem is, however, that no one outside the team has ever actually seen their technology in real life. Well, in a recent press release, they just dropped a few more sweet-smelling nuggets.

“Dev Pathik, Founder and CEO of Sports Facilities Advisory (SFA), is slated to make two major announcements on behalf of Ocean Sports Development, Inc. (OSD) at the upcoming Surf Expo,” the release states. “The first will be the announcement of a new patent designed to enhance the Webber Wave Pools technology with the ability to change the bottom shape of the surf pool on demand by flowing water from programmable flow heads positioned at equidistant points. This technology will provide an almost unlimited number of bottom shapes to change the wave break shape and reaction.” Here’s Greg Webber explaining that:

The second announcement feels a little more concrete than a new, slightly confusing hydrodynamic vision from Webber. Ocean Sports Development (OSD) is the USA Exclusive Licensee of Webber Wave Pools. “The second will be the announcement of OSD’s inaugural surf pool location inside the Omni Orlando Resort at ChampionsGate, an award-winning Four Diamond destination located off I-4 just 10 miles south of Walt Disney World. This first state-of-the-art Webber Wave Pool is scheduled to be constructed at the resort in 2019.”

Like I said, though, so far, all we’ve seen are empty promises, some thrown shade, and no real proof aside from computer generations and long-winded explanations. Take this email I received back in March of 2017, for example:

“Slater’s wave generator is an inferior technology to Webber’s due to the fact it travels only in one direction, creates an inferior number of waves, and cannot change the waves shape in flight,” wrote someone from OSD. “We will have an official announcement for you this month and I want your firm to lead the story which will disclose our big announcement and groundbreaking… Get ready because what we are about to build will absolutely blow the competitors out of the water. The instant I am ready I will call your cell.”

Of course, that call never came and once again, we were left feeling slightly disappointed. Then, in August of 2018, the announcement came that the “first wave pool to use Greg Webber’s technology” had gotten initial approval for Tunnel Vision Wave Park in Australia.

“Tunnel Vision Wave Park is set to be an Australian first, delivering up to 500 waves per hour peeling both left and right,” the site read. “The flawless 500+ waves can reach in excess of 2 meters in height and will deliver up to a 20-second ride of perfection.  All day, every day.” According to Tunnel Vision’s website, however, they “are in the process of applying for Development Approval with the local council…” which means basically that nothing is set in stone.

And while the prospect of an actual Webber pool in Orlando could be exciting, given the track-record, one would be forgiven for taking the news with a very large grain of salt.

So while this may just be another almost in a long line of almosts, with any luck, it may also be the first real announcement to come to fruition—both in the interests of wave pool competition and our sanity. And shit, you know what? I would love nothing more to see another wave pool that “will absolutely blow the competitors out of the water.” Here’s hoping a that it’ll thin the crowds a bit.