The 2019 iteration of the ISA World Surfing Games presented by Vans is just about halfway through, and you’d be forgiven if you haven’t been keeping up. The nature of the event happening in Japan makes it a little tough to tune in from the States – being that most of the action goes down at night and during the wee hours of the morning. But, with the conclusion of the women’s action and most of men’s Round 1 dusted, now marks an appropriate time for a quick recap. Expect a full breakdown of the event’s impact on Olympic qualification when it concludes. 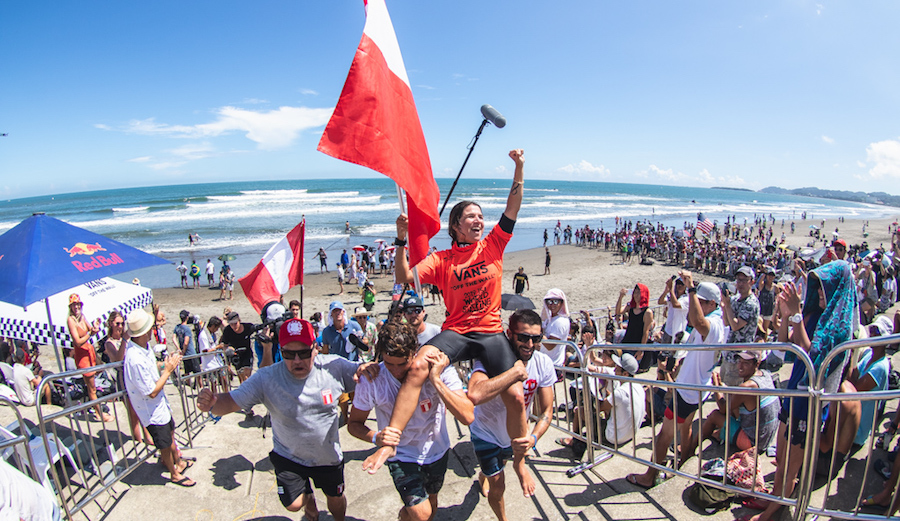 It’s been a minute since we’ve heard anything from Sofia Mulanovich. The 36-year-old Peruvian and 2004 world champ may be semi-retired, but when she caught wind that the International Olympic Committee voted to include surfing in the Olympics in 2020, the opportunity to represent her country was too good to pass up. Mulanovich handily defeated some of the top-ranked women’s CTers in the final in Miyazaki – Carissa Moore, Silvana Lima, and Bianca Buitendag – making her qualification for the Olympics all but certain. Recall that the CT is the first avenue for qualification and the 2019 World Games is the second. It’s likely she’ll compete with fellow Peruvians Lucca Mesinas and Daniella Rosas who upped their Olympic dreams after standout performances at the 2019 Pan American Games.

That Mulanovich would (likely) qualify for the Olympics after defeating current CTers, including current world number one Carissa Moore, highlights how the qualification scheme the ISA developed can incorporate talented surfers not currently competing on the CT. After all, qualification for the CT in the first place requires stringing together a year’s worth of good results at expensive and sometimes hard-to-reach places. The ISA World Games, like the Olympics, comes down to who’s having a good day and who isn’t.

As we thought they might, the story after the first day of men’s Round 1 competition was that the current Championship Tour rank and file had dominant performances. Nearly every heat that featured a current CTer was won by said CTer (Conner Coffin being one of the few exceptions). That’s despite rumors swirling that due to the tight timeline between the Tahiti Pro, ISA Worlds, and Freshwater Pro, those athletes might sandbag a bit. The logic there was they might simply fulfill their obligation to compete then dip over to California to rest up for an event that actually counts toward their rankings (that will, in the end, decide Olympic qualification). At least after Round 1 that wasn’t the case.

The surf hasn’t been super impressive for the event – it ain’t Tahiti – but waist-high rippable waves have been highly contestable through the window – looking a lot like a pretty decent day in Huntington Beach, California.

You may recall, too, that earlier this year Kelly Slater played coy about his Olympic ambitions even going so far as to hint he may not show up to the ISA Worlds. Well, it would appear that not even an 11-time world champion can escape the siren song of Olympic gold – the GOAT looked like a well-sunscreened machine taking down Irish QSer Gearoid McDaid. 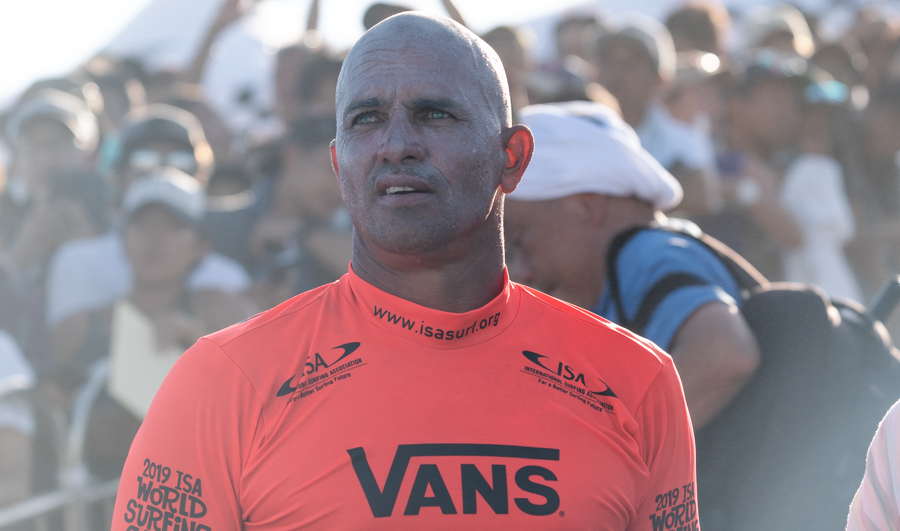 Slater seemed wishy washy on the Olympics earlier this year, but after winning his first heat on Tuesday, it would appear he’s in it to win it. Photo: Evans/ISA

According to the ISA, this year’s World Games features 240 athletes representing 55 nations, a new record for the event. In conversations we’ve had with ISA President Fernando Aguerre, he’s made clear that broad geographic representation and inclusion of top talent are the two goals of the ISA’s Olympic qualification scheme as expressed to them by the IOC. Nations like Australia, Brazil, the United States (that includes Hawaii), and South Africa have long dominated Championship Tour rankings. But, because the IOC wants to see more countries represented the system allows for some Olympic slots to be reserved for the CT, some for the World Games, and some for the Pan American Games.

This year’s World Games are both the most geographically representative and the most saturated with CT talent in the history of the event. In other words, it’s the perfect Olympics facsimile and gives us an idea of what the event will look like at Tsurigasaki Beach next year. More to come on that as the men’s side of the event continues, but if the women’s side is anything to go off of, there are bound to be some shake-ups.