Kelly Slater, On the Cusp of Olympic Qualification, Says He’s Not Sure He’ll Want to Compete 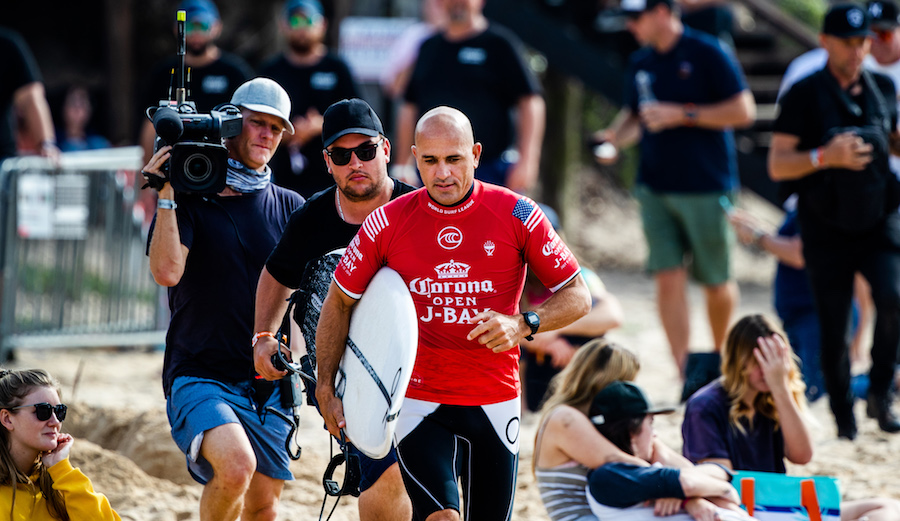 “I’ve really got to figure out all the factors around [the Olympics] and make a decision in the next few weeks.” Photo: Sloane/WSL

After an equal ninth-place finish at the 2019 Corona Open J-Bay, the only thing standing between Kelly Slater and qualification for the 2020 U.S. Olympic squad is Kelly Slater himself.

In a recent interview with NBC Sports, the eleven-time world champion revealed he’s having serious second thoughts about heading to Japan this September to compete in the ISA World Surfing Games – an event that Olympic hopeful invitees must compete in to stay Olympics eligible, barring unique circumstances like injury or illness.

Currently, Slater ranks ninth on the WSL Championship Tour rankings, outpaced by John John Florence who, despite his injury, sits third, and Kolohe Andino, who’s on the top of the leaderboard. If Slater keeps his momentum through the end of the year, though, he’ll handily rank above Florence and likely qualify.

Now, however, Slater must decide if he wants to squeeze in a trip to Japan to compete between the next two CT events in Tahiti and California – the waiting period for the Tahiti Pro Teahupo’o runs from August 21-September 1, the ISA World Games will take place in Miyazaki, Japan from September 7-15, and the Freshwater Pro will run September 19-21, a hectic schedule no doubt. This week, Slater told NBC he wasn’t sure he’d be up for it.

“I’ve really got to figure out all the factors around that and make a decision in the next few weeks,” he said. “I think I have to surf that event, and if I don’t, it may disqualify me. But I’m not sure if I want to go to Japan and compete right now.”

Earlier this year, Kelly Slater told the New Zealand Herald Olympic qualification was, “on [his] mind.” And in the months since, with John John Florence head and shoulders above the rest of the field in the rankings, the 11-time world champ has largely been embroiled in a battle for the second slot on Team USA with the likes of Kolohe Andino and Conner Coffin. Now that Florence is out indefinitely recovering from a knee injury, Olympic qualification seems more likely. But, Slater says his primary focus at the moment is the tour.

“Right now in my head the focus is more on this tour than it is on the Olympics, but we’ll see,” he said. “I was starting this year with a lot of pressure on myself to try and make the Olympic team and think, maybe I’ll retire there next year and that will be the end for me. It put so much pressure on the start of the year for me that I didn’t feel like I could freely compete. It was putting too many things in my head. I needed to let that take a backseat and not worry about it. I’m just not really thinking about it a lot.”