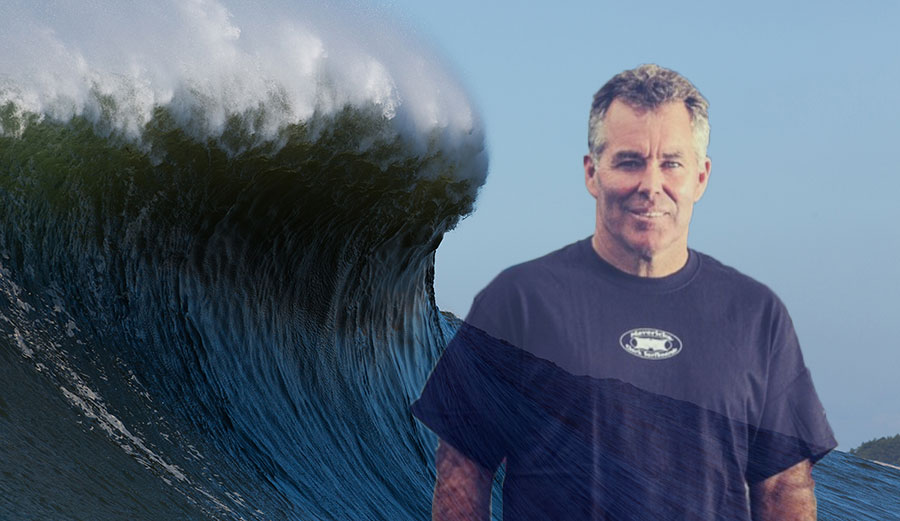 On a sunny afternoon at a barbeque at Chris Cuvelier’s house, Jeff Clark had an idea. It was a lightbulb moment regarding big wave surfing events at Mavericks. It was a lightbulb that had been burning for a long time, but this time it was a little brighter. That idea would soon become the Mavericks Surf Awards, a recently-announced event with a format different than any other seen at Mavericks before.

“I wanted to do this a long time ago, but it kind of fell on deaf ears. Everyone wanted a one-day contest,” Clark told me over a bad cell phone connection. Vehicles roared by the phone, occasionally drowning out his voice. “In an ideal world, Mavericks breaks, photographers shoot it, videographers shoot it. Then they submit to us the best of the best of each swell. At the end of the year, we have an awards event where we have a female performer of the year, a male performer of the year, biggest wave, and best barrel ride.”

It was, like so many of the best ideas, born out of a mixture of necessity and frustration. Big wave surfing events at the famed California wave have been notoriously mired in controversy in the past, and as the man who brought Mavericks to the wider world, Clark has often found himself at the center of that controversy.

Tracing the big wave contest history at Mavericks is complicated — so complicated that when I told Clark I had lost the thread of it, he just laughed. “Yeah,” he sighed. “It’s gnarly.” Much of our conversation about the Mavericks Surf Awards leaned towards past events, like Titans of Mavericks, whose organizers eventually filed for bankruptcy.

Cartel Management, the company belonging to Griffin Guess, apparently owed (or owes) somewhere between $1 and $10 million, and Titans of Mavericks owed up to $500,000, according to court filings obtained by Chase Scheinbaum for a story he wrote for The Inertia in February of 2017. “Together, the companies owe money to scores of parties including Fox Sports Network, and have unpaid bills to the San Mateo County Harbor District for $6,600, credit card debt to the tune of $20,000, and even owe surfer Savannah Shaughnessy $300,” Chase reported at the time.

So the future of another Mavericks event looked shaky, to say the least. Then the World Surf League stepped in and bought the contest permit from Cartel for somewhere in the neighborhood of half a million dollars. But a few months ago, the WSL scrapped the contest altogether and wiped their hands clean. “They were like, ‘we can’t step in that,'” Clark said. “‘You can’t ever get that off your shoe.’ That’s when they moved away from it and we announced what we’re going to do.”

Big wave events are not often a perfect experience, for the viewer or the surfer. They’re dependent on the vagaries of Mother Nature, after all, and she’s a fickle one. One-day events haven’t proven to work well, aside from a few rare occurrences. Long lulls and lackluster surf are commonplace. Big wave surfing is often better digested as a whole season instead of a single day, which is a driving force behind the Mavericks Surf Awards format. “If guys didn’t show up on the day of the swell,” Clark said, “or they were having a bad day; they were sick, or just off — this changes that. This way, you can have a great year and have those bad days.”

Think of it as a season-long highlight reel with an awards ceremony at the end.

“It’s been so frustrating,” Clark lamented. “When the waves come, let’s go surf. That’s what these awards lend themselves to. When does it start? Well, it starts when the surf breaks. I want to change it back to the pure essence of surfing: when the waves get big, you go ride them.”

Organizers of the Mavericks Surf Awards devised a simple mission statement: “To celebrate Mavericks and the men and women who surf it,” Clark explained. “We have a few objectives. The first is to celebrate the people who surf Mavericks, the second is to promote inclusion, equity, and environmental stewardship. By that, I mean equal pay for women.”

In terms of inclusivity, the format is nothing if not that. Anyone can enter. When I asked Clark if even I could enter, he chuckled. “Mavericks, as it always has, will take care of itself,” he said. “It’s not a wave for everybody. As soon as you think you’re all that and a bag of chips, it’ll show you that you’re not. Let’s say you show up and you get a bomb. You kick out in the channel and everybody is off their rockers hooting for you. Somebody’s got that video, and you’ve got two weeks to submit it to us and it goes into the running. It doesn’t matter who it is.”

While the judging panel hasn’t been formalized yet, Clark wants it to feel more like a jury of peers than anything else. “I want this to be just like when you’re in high school with your handful of friends and it’s going off,” he explained. “It’s that group that determines who was killing it that day. Who got the best barrel, who got the best wave, who did the most radical maneuver. It’s going to be judged by former finalists in the Mavericks events or seasoned veterans in the bowl. People who, when they were on, they won the day. They may have never made it into a contest, but they’re at that level. Their judgment is beyond reproach. I want the (surfers) who look at a wave and they’ve been there. It’s not a pretty picture contest. This is going to be to the core. What do you think about Matt Ambrose being a judge? Or Flea? I don’t think we’ll be at a loss to find qualified judges.”

Big wave lineups around the world are a little different than the average one. At places like Mavericks, there are a select few who make it their life’s mission to be there when it’s on. Clark loves that part of big wave surfing.

“From the first time I got anyone to come and surf with me at Mavericks,” he said with a hint of nostalgia lacing his voice, “there were people who really embrace it and showed up year after year after year. They can be from anywhere in the world, but they’re locals at Mavericks. They’re that familiar face in a really dangerous place. They understand it. They thrive in it. That’s what I want to continue. To have that family of big wave surfers that continually comes together. Maybe they can’t get there for the first swell, or the second swell or the last swell, but whenever they can make it, they have a chance to be recognized for their ability and commitment to big wave surfing.”

As of right now, the purse sits at $50,000, but organizers are working hard to double or even triple that number. “Let’s make this real, you know?” Clark said.

When I asked Clark if he could pick a winner, he paused. “Shoot,” he said quietly. “I even got a chance at it. I didn’t forget how to surf… I just can’t get to my feet as fast as Kai Lenny anymore. But the person that will win will be the person who’s in the right place on the right wave.”