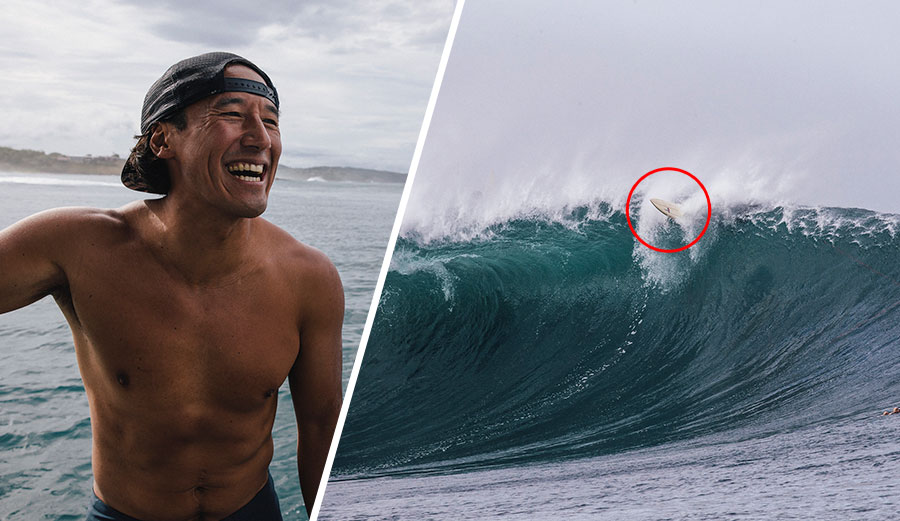 Jimmy Chin tried. Very hard. And he had a blast doing it. Photos: Jeff Johnson

Jimmy Chin has accomplished far more than most in his life. He’s climbed Everest and skied down. He’s walked across the Chang Tang Plateau. He won a Sundance Audience Award for his 2015 documentary Meru , and of course, he won an Academy Award for Free Solo. He’s one of those curious humans who seems to be able to simply decide to do something… and then actually do it. But of all the things in his life that he’s accomplished, there was one thing missing.

“A little while ago,” Chin explained, “John Rose did an interview with me. He asked me as his last question if there was anything I still wanted to do in my life that I hadn’t done. I told him I wanted to get barreled.”

When Jeff Johnson, noted photographer, writer, and a key influencer in surf culture, heard that… well, he decided it must be done. “We gotta get Jimmy Chin barreled,” he said. So, with the help of Mark Healey, Jon Rose, and Keith and Dan Malloy, they embarked on a trip with the sole purpose of getting Jimmy inside a tube.

Now, just because Chin is one of the best climbers on earth doesn’t mean he’s one of the best surfers. He spent most of his earlier years as, in his own words, “a dirtbag climbing bum/ski bum.” He spent seven years living out of his car chasing mountains, but surfing was always something that interested him. He’s a passable talent in the water, but, as is the case with many surfers, getting tubed was something that had always eluded him. “For some reason surfing always captured my imagination,” Chin said. “Even when I first met Keith and Dan and Jeff, even though we kind of come from different worlds, there was an immediate mutual respect.”

It was a trial by fire, though, and there’s a name for that in climbing: sandbagging. It means throwing someone into a situation that they might not necessarily be ready for. And when they first pulled up to the wave that was supposed to hold Jimmy’s first barrel, he was intimidated, to say the least. “This is a pretty heavy crew,” he laughed. “I’m rolling pretty deep right now.”

It wasn’t a small day out there, not by any means. “You couldn’t really tell how big it was because nobody was out,” said Dan Malloy. “But then as soon as Healey got out there, you could tell it was like, solid surf. Really heavy.”

Chin, as he does, pulled out all the stops, despite his reservations. And he paid the price for it. “He went and felt the power,” said Mark Healey. “He did not shy away from anything. He felt the full brunt of what was out there, and it was serious stuff.”

While Healey, Rose, and both Malloy brothers had different expectations for the success of the mission, it was clear they were excited about it. And although it’s arguable whether or not Chin actually got barreled, the end result didn’t really seem to matter much to anyone. “In my mind,” Chin said, “it was the perfect trip. I couldn’t have asked for a better crew or a group of teachers. I can’t say that I got barreled. I just made that arbitrary goal because I love the process of trying to get someplace that seems impossible. It forces you to do all these things that you might not necessarily push yourself at. I think a big part about staying young and happy and stoked is always being open to learn. I think it keeps you young. I always want to be learning something new or having a new experience or pushing myself in a new way. I think that’s important.”

Editor’s Note: You can read our interview with Jimmy Chin, here.