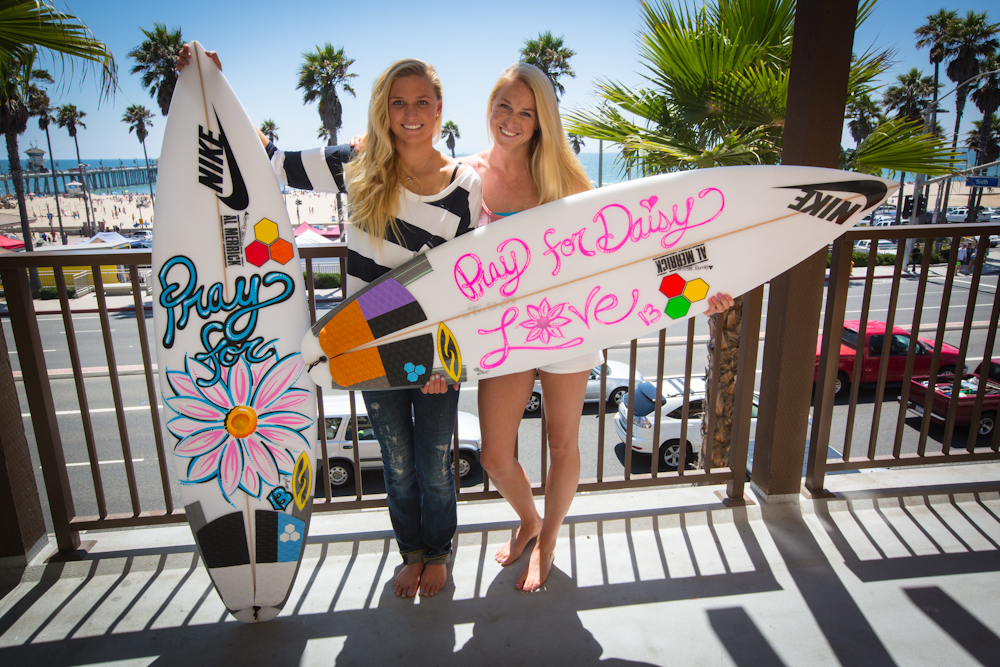 With Daisy on my mind and knowing how many people would be watching the U.S. Open, I had a few new boards made for the event. Photo: Aaron Lieber.

This summer I had the incredible chance to compete in the U.S. Open of Surfing in Huntington Beach. The U.S. Open is the last event of the year on the Women’s Tour, and it’s probably our biggest. Throughout the week about 760,000 people came to the beach and over one million viewers watched online! I personally love the hype of the event as well as the opportunity to show the world my surfing. Going into the contest, I had three really bad results in a row, so I was hungry for a good one. I definitely wanted end the year on a high note, but I also had a more moving inspiration to perform well.

I ride for Al Merrick’s Channel Islands Surfboards, which, in my opinion, are the best surfboards in the world. Being connected to Al Merrick and his family, I’ve known that Al’s granddaughter, Daisy Love, has been battling cancer for three years. I have known Daisy for a while, because not only is Al her grandfather, but also Daisy’s father is the pastor at my church here in Santa Barbara. I have always had a special place in my heart for this little girl. When she was first diagnosed, I cried for days and prayed for her recovery.

With Daisy on my mind and knowing how many people would be watching the event, I had a few new boards made for the U.S. Open. I wanted to dedicate the boards and the event to Daisy. I had my friend Hillary Dunks, an amazing artist who has done some of my boards in the past, drive up from San Diego to draw one my boards. We discussed the idea for the boards, and I think they turned out amazing! We also made a little video for the live webcast to play during the event about Daisy and her story, and it spread like wildfire! That’s when I realized and decided that I wasn’t surfing for myself at the U.S. Open. I was surfing for Daisy! It made me want to do that much better in every heat.

As each I advanced through each heat, it felt like I was gaining momentum and surfing better. When I found myself in the finals, I felt no pressure. I just wanted to surf my best for everyone. After the final horn blew, I was truly speechless. I felt like everything worked out the way it did because I wasn’t so focused on myself. I was focused on Daisy and winning for her. It was a day I will never forget, and hopefully Daisy won’t either.