Learning to “Take the Drop” 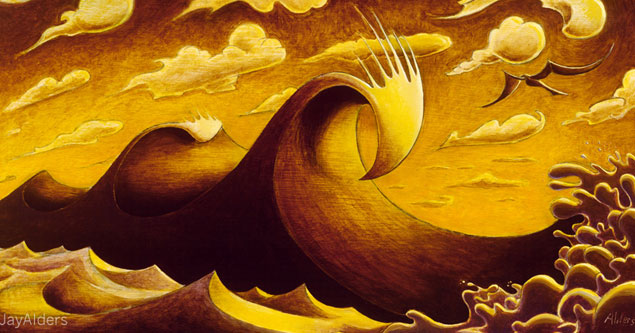 What is it about "the drop" that makes it easy, almost instinctive, for some – and harder for others? Does this risk-taking in the ocean translate into risk-taking in life? I’d say yes. Art: Jay Alders

“Taking the drop” is one of the many ways that my brother describes his descent down a wave. It’s the decision to paddle into a wave right at the moment it rises up behind you. He tells me it’s a make-or-break moment in any surfer’s day, when he chooses to leap to his feet and “drop” down the face of the wave before the board fully connects with the ocean the white-knuckled ride begins.

For those learning to surf, it can be a moment of fear. It feels like your gut has taken up residence in your throat, and the rest of your body hasn’t quite caught up to itself. Avoiding the drop can also be a stumbling block. It’s the one split-second decision which can hold you back from bigger and better waves.

What is it about “the drop” that makes it easy, almost instinctive, for some – and harder for others? Does it have to do with surfing skill or time clocked on a board? Or is it simply that some surfers have more courage than others?

My younger brother, Jimmy, has been surfing for about 10 years. Our family didn’t grow up by the beach, around beach culture or “surfy” people. Our closest glimpse of ocean was 45 km away. But so desperate was Jimmy to feel that rush that he used any means of transport he could to get there – trains, ferries, lifts from friends or parents and once, a skateboard. My brother has never been afraid of adrenaline and would consider it a vital part of his everyday being. So how does this translate to his life?  Does his love of “taking the drop” on a wave mean that he’s able to take more risks in life than others?

I’d say yes.  Jimmy has taken more risks than most people I know, and he’s only 20. He dropped out of school aged 16 (against my parent’s wishes) because he was certain that he wanted to be a carpenter. He took out a $20,000 loan at age 17 to buy himself a car. Soon after, he moved to Queensland with his girlfriend, without guaranteed work or the comforts of home. He’s a true gambler, just without the gambling.

To some, these might seem like only minor risks. To me, they are huge. Case in point, I still only pre-pay my phone because I don’t want to commit to an account. I finished high school, went straight to university and then hop, skipped and jumped my way into a job just because I didn’t want to risk missing out. I feel uneasy doing backstroke, because if I can’t see exactly what’s in front of me, then to me, it isn’t worth doing. But things change, and people change, and I’d like to think that after having bought a one-way plane ticket to Europe for myself, I am one of those people.

You could say that it comes down to purely guts and balls, how the waves are looking or how you’re feeling on the day. Or maybe some are born with it: that little something special and intrinsic that makes you push yourself a little bit farther to get across the line.

I’m pretty sure that Jimmy got my share of “risk” in the womb. Either way, the drop is always going to be there, whether we choose to take it or not. You can never talk your way out of the drop, you just have to launch, launch and launch again and hope that one day it (the fear) isn’t there anymore.

This morning I dusted off Stella, my trusty longboard, and took her out for a swim. I went to my usual spot and sat there a while. I let wave after wave rock past me. “I wouldn’t have made it…the wind wasn’t right…it was too big, too small, too fast,” and so on. But soon it was there: “my” wave. I knew what to do, and I was ready. I paddled hard, felt the strength of the wave as it rose up behind me…..and then I took the drop.