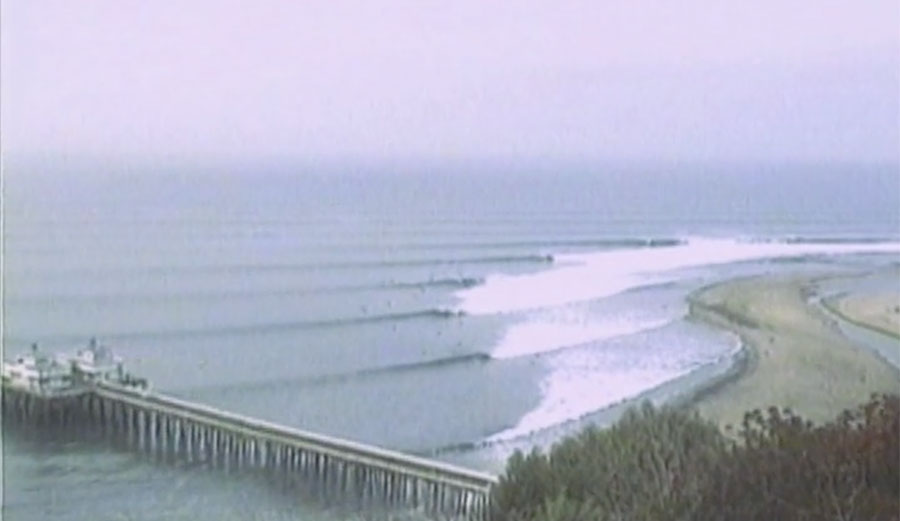 Malibu, back in the day. Image: screenshot from The Thrill is Back

On July 22nd, we ran a story entitled Locals Enraged at California State Parks’ Lagoon Restoration Project. In it, I quoted a Malibu Times story penned by Judy Abel in which Dru Lewis, Malibu Surfing Association Treasurer, said of Third Point, “for the past five-plus years, it’s really been bad. The point’s not as makeable as it normally would be. In a great swell, you would surf at the top of that point all the way down to the pier, and that hasn’t happened in years.” It’s not just the MSA that’s concerned, either–many in the community believe that the lagoon’s restoration, despite good intentions, fell short of its intended outcome.

California State Parks Angeles District Superintendent Craig Sap had his say, too. “We all know that the tendency for Malibu Creek is to drift toward First Point and its eroding sand in front of the Adamson House,” he told The Malibu Times. “This has been an issue going on for many years. We’re looking at how this can be addressed to avoid additional erosion, but at this point, we only have discussions about what can be done. The issue is more complex than State Parks just fixing it because there are multi jurisdictions that have oversight. It’s beyond the purview of just State Parks and involves other agencies, including the Coastal Commission, the Army Corps of Engineers and U.S. Fish and Wildlife.”

Now, a few days and a little bit of backlash later, Mark Abramson, the Senior Watershed Advisor and Malibu Lagoon Project Manager from The Santa Monica Bay Restoration Foundation has responded. The following is the response in its entirety:

In response to the Judy Abel article “Surf Community Calling for Immediate Changes at Malibu Lagoon”. While we respect the opinion of others we felt it necessary to respond to the many inaccuracies and falsehoods put forth in this article. It is also very unfortunate that writer did not interview a single scientist or expert associated with the project in order to avoid these errors.

To clarify, the Malibu Lagoon Restoration Project was an ecological restoration done specifically to enhance habitat, water quality, and bio-diversity of plants and wildlife in the western portions of Malibu Lagoon. The western portion is the area to the west of Malibu Creek and the Pacific Coast Highway bridge. The restoration was specifically designed and built to avoid any alterations of the ocean, the surf break, and the outlet of Malibu Creek. No work was done in the river mouth area at the outlet of Malibu creek.

1. Increase tidal flushing when the Lagoon is open to the ocean and Increase circulation when the lagoon is separated from the ocean by the sandbar. Data collected over the past 4 years clearly shows that the topography of the western channels are stable with no significant build up of sediment or organic muck. Dissolved oxygen levels and water mixing are markedly improved. Algal blooms rarely occur following the restoration and when the do the improved circulation quickly flushes them from the western channels.

2. Improve the chronically low levels of dissolved oxygen. Dissolved oxygen levels are better during both open and closed conditions. Fish are using every part of the Lagoon no dead zones exist. No large fish kills have occurred since the restoration.

3. Increase the diversity of native plants, the diversity and abundance of fish, macroinvertebrates, and crustaceans. Native plant diversity has increased from six dominant plants to more than 50 species within a 10-meter transect. Fish species and the sheer numbers of fish are greatly increased and non-native fish numbers have significantly diminished. We have a better balance of macroinvertebrates with increased numbers of marine species that are more sensitive to pollution which indicates a cleaner healthier Lagoon. Crustaceans have returned to the area.

4. Provide trails, interpretive and recreational areas for educational programs, surfers, beach visitors, and birdwatchers. Amenities have been installed and are well used by the public including surfers
In addition to these goals the following improvements have occurred since the restoration was completed:

The article states the lagoon project is the cause of perceived changes in water flow, increased erosion near Adamson House, and has altered the surf break.

As the flows in the creek diminish, sand is deposited on the beach by the predominately west to east current building a sandbar or berm. This berm eventually creates a barrier between the Lagoon and the ocean, As the ocean deposits sand and builds the sand bar, the size of the lagoon opening gets smaller and the location of the opening is pushed east towards the Adamson House. As the Lagoon closes the opening always has and always will migrate to the east. This is how the system works and it can’t be altered unless we build a huge jetty or structure through the middle of the break to prevent the migration of the channel or we continually use heavy equipment to move the location of the opening. These solutions would dramatically alter the break or impact the many species of birds and fish that depend on the Lagoon. To believe this was caused by the restoration is ridiculous and demonstrates the lack of understanding of how this system functions.

“The project was originally supposed to include removal of the invasive New Zealand mud snail, but that never happened.”

The project was never intended to remove the New Zealand mud snail. It would be impossible to remove them as they are 1/8 inch or smaller, they can live in the moist sediment for months, they are asexual (meaning they don’t need a partner to reproduce), a single mudsnail can produce a colony of up to 30 million throughout their short lifespan, and the mudsnails originate from upstream in the Malibu Creek Watershed and would easily just repopulate the area. To even try and remove these snails would require tens of millions of dollars, the removal of millions of tons of sediments, completely drying out the area and all sediments for months, and even then you would likely not succeed. Even if you did succeed mudsnails from upstream in the watershed would simply recolonize the area. This was never contemplated and would be ludicrous to attempt. The project did require that all equipment and supplies that had contact with wet sediments or water be pressure washed at a temperature higher than 212 degrees Fahrenheit and dry out for at least 72 hours before going to a different site. This was done to make sure that mudsnails would not be spread to new locations.

“Thousands of truckloads of sand contaminated with the snails were supposed to be removed from the lagoon, but after protests from environmentalists, the sand was dumped at the west end of the lagoon.”

This is also totally untrue. Several thousand yards of organic muck and trash were removed during construction. It was always intended that wetland soils would be protected and reused as part of the restoration. We also estimated the volume of soil to be removed using the worst case scenario to properly mitigate for any traffic impacts. While we exported 9,000 cubic yards less material than we initially estimated and therefore had 900 fewer truck trips the soils that were moved onsite followed the plan exactly. No extra materials were used as fill above the amount required to construct the project.

“Since the soil did not leave the site, it was added to the terminus area near the Malibu Colony chain link gate. In doing so, that material was mixed with sand and other soils, and now that it has plant matter growing on it, the roots have held the soil in place. Because of the compaction from tens of thousands of people walking across it weekly, the soil has made the area like a small earthen dam. That sediment issue has turned the lagoon breaching exit southward.”

This is also completely erroneous. No soils were placed at the terminus of the lagoon near the Colony gate. All materials were placed in the western lagoon none were placed on the beach. There has always been plant material that grows near the gate and edge of the Lagoon. Despite millions of visitors walking on the beach every year it does not compact because sand does not compact (This is why we can’t use sand as a base for concrete foundations and we must drill down to hit rock or other stable materials). and it is not creating an earthen dam. It is the height of the sandbar that determines the location of where the Lagoon will breach the lowest spot always wins. Since the restoration was completed the Lagoon has breached at either 2nd or 3rd point to the west. The breach location will change over time and the project itself was never intended to impact the breach location.

To sum up, the Malibu Lagoon Restoration Project has met or exceeded the project goals and success criteria for each of the last four years. Water quality in the ocean following the restoration is cleaner. The endangered Snowy plover and Least terns have successfully bred for the first time in 70 years. The endangered Steelhead trout have been observed using the Lagoon for the first time ever. The diversity of plants and the diversity and abundance of fish, macroinvertebrates and crustaceans has improved.

The Lagoon project was specifically designed and built to not create any changes to the frequency, duration, or location of where the Malibu Creek river mouth opens or closes. The restoration project has had no impact on how rain events function through the Malibu Creek river mouth. The Lagoon always has and always will migrate to the east as it closes. Sea level rise, larger and more frequent storm surges, and higher beach run up is eroding Malibu Beach and beaches up and down the California Coast. This will continue to happen and likely get worse as sea level rise increases. The existing sea walls at Adamson House are likely accelerating beach erosion at Malibu Beach.

There are millions of users, in addition to surfers, who swim, play, recreate, educate at Malibu Lagoon and Surfrider Beach every year. The community has to decide how they want to deal with sea level rise and beach erosion as it will continue to threaten structures and infrastructure. We can either allow mother nature to expand naturally by raising and moving structures out of harm’s way or we can build sea walls and try to fight mother nature. The building of sea walls will further increase beach erosion and likely ruin iconic surf breaks like Malibu. Restoring wetlands, sand dunes and moving structures and infrastructure out of the oceans path will ultimately be cheaper and will protect or beaches and surf spots for future generations.