Max Watson Vanished on a Surf Trip to Mexico, and a ‘Mystery Couple’ Might be the Key To Finding Him 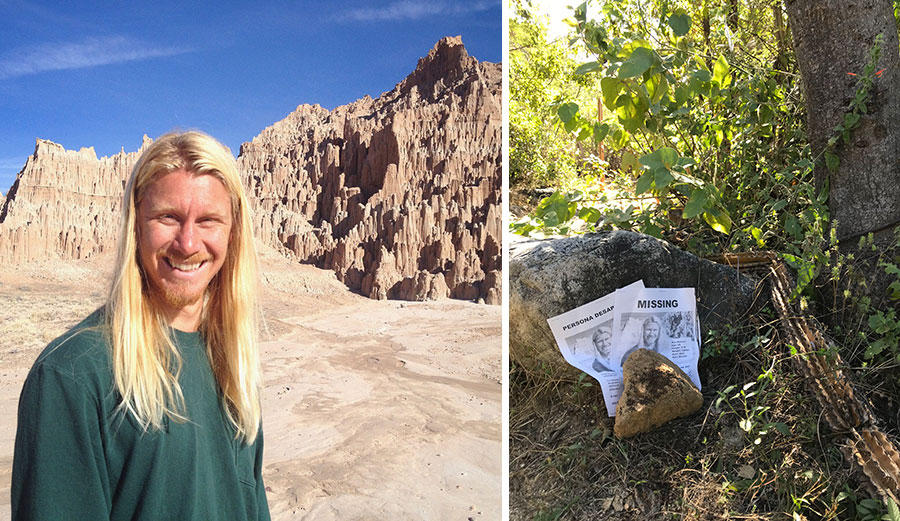 On December 18, 28-year-old Max Watson decided to hike to El Picacho, a 7,000-foot peak in the Sierra de la Laguna mountains that run down the middle of Baja Sur, Mexico. He hasn’t been seen since. After months of searching, there’s still no trace of him. There is, however, one very large loose end: Max was last seen getting into what appeared to be a rental car with a mystery couple.

Max and his family are not newcomers to Baja. Originally from Hood River, Oregon, they’ve spent countless years exploring Mexico.

“We’ve been going every year since we were kids,” his brother Wiley told me in a phone interview. “I don’t think there’s been one year that we haven’t gone—maybe once in the third grade, but our parents have been taking us down there for 25-plus years.”

I first reported on Max’s story in mid-January after a friend who was helping with the search effort mentioned that he was missing one afternoon. I’ve also been going to Baja a few years, and Max and I have camped on the same beach. I never spoke to him much aside from a handful of brief conversations in the water or quick nods of acknowledgment in passing, but that was as far as our relationship went. He was just a guy I’d see every year in Baja. Long blonde hair, a body like a willow tree, a bit of soul in his surfing, a smile glued to his face. I’ve been following his story closely since his disappearance, but only recently got in touch with Wiley.

A few days before Max set off on his hike, Max spoke with Wiley and told him what he was planning. “I was up by Conejo surfing, so I didn’t really have service,” Wiley remembered. “I talked to him briefly before he was going to hike El Picacho. He said, ‘I’m going to go do this hike, and I’ll be back in 3-5 days.’ I told him I wouldn’t have service, so I’ll just see him when I get back. It was just before Christmas and family was coming down for our annual gathering. So when I got back into Todos Santos and I didn’t hear from him, I thought it was a little weird, but I could see him staying out a couple of days longer, no problem — he loved the draw of the mountains.”

After a few more days elapsed, however, the family really began to worry. “After seven days, I was like, ‘something’s going on,'” Wiley told The Inertia.

On December 27, a few days after Max was supposed to have returned, search parties hit the ground. From what the family has been able to piece together, Max packed up his van and headed for the trail that winds its way through the mountains. Once there, he parked at a rancher named Davide’s house.

“It was parked at this rancher’s place because he didn’t want to pay the 200 pesos to park at the trailhead,” Wiley said. “This guy’s ranch is four or five miles from there. He found this really friendly rancher and struck up a friendship, and was like, ‘hey, can I leave my van here?'” 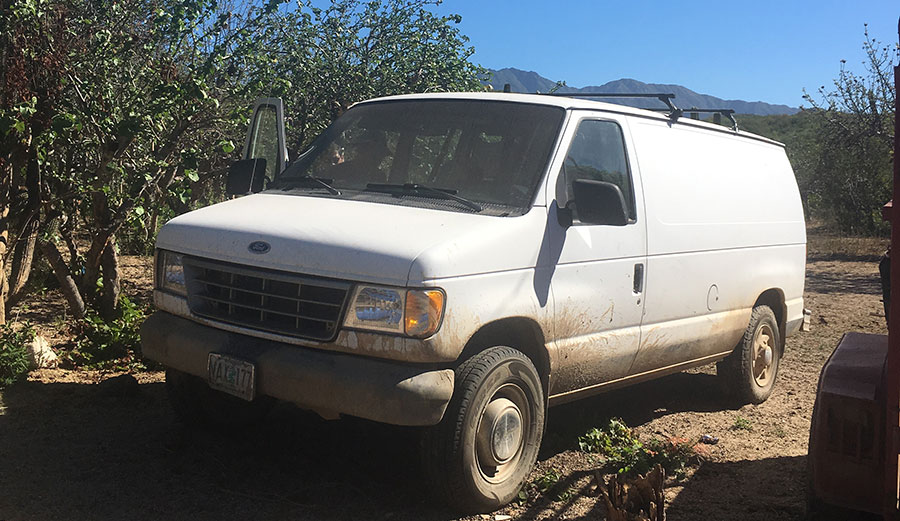 Max’s van, where he parked on the rancher’s property. Image: Wiley Watson

According to Davide, after a brief exchange with Max, the mystery couple appeared on the road.

“The whole crux of the equation is that the last time anybody saw him, he got in a car with this other couple, who were gringos,” said Wiley. “[Davide] asked Max where he was going, and Max said, ‘I’m going to El Picacho.’ Then what appeared to be a rental car followed him. It didn’t pull all the way into the ranch. They stopped out at the gate. Max talked enthusiastically with Davide, then ran off with a jug of water and hopped in this car and left. That’s the last time anybody saw him.”

There is a vague suspicion that Max might have known the couple, but unless they’re located, there’s no telling. It wouldn’t have been out-of-character for Max to give a hug to a stranger, his brother said.

“Apparently, he hugged them—we got that piece of information after a few interviews—and that tells a little bit,” Wiley said, “but that might’ve just been Max going, ‘Thanks for giving me a ride,’ you know?”

The area where Max vanished is rugged and vast, filled with dusty arroyos, waterfalls, and towering cliffs. That ruggedness, as attractive as it may be, makes the search for Max a difficult one.

“There’s just so much area to search,” one volunteer told me after a few days of hiking through it. “It kind of feels like pissing in the wind.”

What is clear, though, is that Max did not mean to be gone for long. When search parties found the van still at the rancher’s property, it had his wallet and passport in it, among other things.

Now, more than three months after his disappearance, Max’s family and friends are at a loss. They’ve exhausted nearly every possibility and still, there’s no sign of him. According to a fundraiser, search dogs picked up a scent on December 31 on a trail that split towards the canyon, but after a few hours, it disappeared into the blowing dust. Since then, months of searching has turned up nothing—no trace of clothing, no hint that Max was ever there.

“We have looked at every trailhead that goes up there,” Wiley said. “We’ve searched it with every resource. Looked at every canyon to the right and to the left and had dogs and helicopters. It’s been more than three months, and we haven’t found a single piece of information. Like, nothing. Zero leads on the couple.” 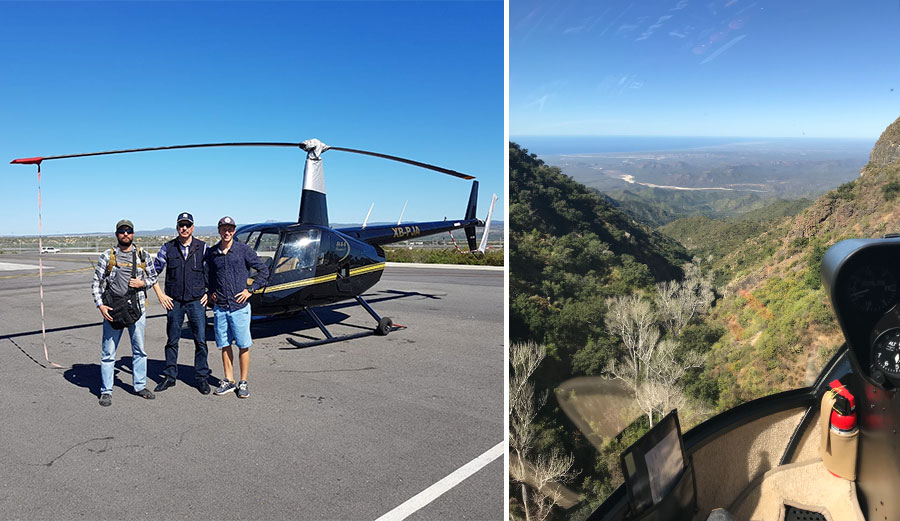 The view from the helicopter shows the vastness of the area where Max Watson could be. Image: Wiley Watson

The rancher gave a description of the car the couple was in, but even that is of little value. “He said they were in a silver or grey four-door,” said Wiley. “There are like 5,000 around there that are exactly the same. We tried contacting the rental car companies and going through rentals at that same time-frame, but legally we can’t do anything, even with permission from the FBI.”

While the Mexican authorities have been doing their best, it’s proven difficult at times, for a variety of reasons.

“Honestly, the Mexican authorities have been a little bit of a pain in the ass,” Wiley told me. “I mean, they did an alright job, but you can’t expect all that much because they don’t really have the proper resources to conduct a SAR. Fundamentally, though, they were very concerned about the situation. There are definitely a little bit of politics involved—I mean, they don’t want the news getting out that there’s a missing American. I don’t want to give them a bad rep, and I know Max wouldn’t either. We love Baja and its people.”

Although he can’t be sure, Wiley has a few ideas about what might’ve happened to his brother, but he’s aware that in an area like the one where Max was last seen, the possibilities are almost endless.

“There are so many visually stunning areas up in the mountains that we were able to see from the helicopter. Waterfalls, pools and cliffs you’d have to rappel down,” he said. “Gnarly shit.” You’re not going to hike up in there. Max didn’t have climbing ropes or any climbing experience. He was just in hiking shoes.” 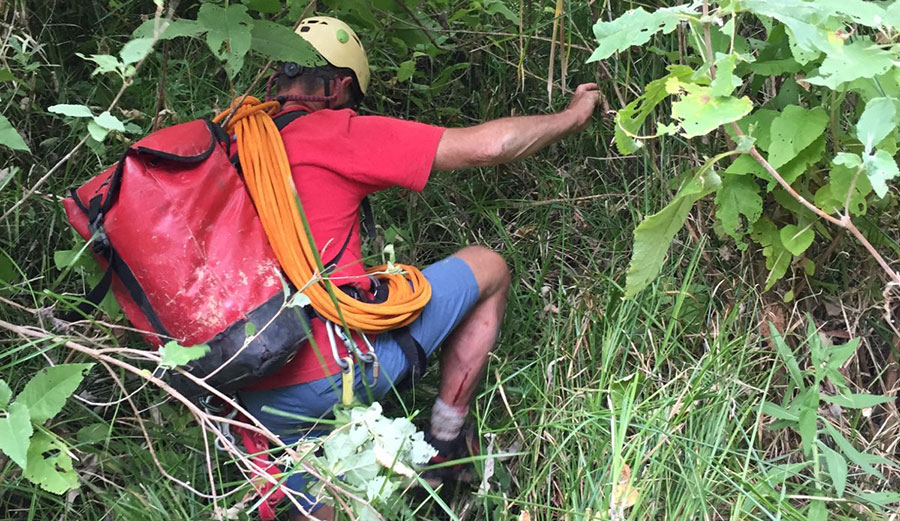 The area where Max disappeared is not easy to navigate. Image: Wiley Watson

Wiley theorizes that Max might have fallen victim to a mix of casual carelessness and sketchy information.

“I think what happened is that he got a ride, but wherever he went to wasn’t anywhere relevant to where we’ve looked,” he hypothesized. “I think Max got a little wild-haired and just thought, ‘Hey, I’m going to start here and hike to the top, but I’m going to go up this crazy way.’  I think there was some negligence involved and Max ran into some bad luck — its tough to say, we have been spinning with a multitude of ideas now for months.”

That said, the family still feels that the unidentified couple holds the key to the mysterious disappearance of their brother and son, but in the wake of the media attention, finds it strange that no one has come forward.

“I do definitely get a weird feeling about this couple,” Wiley said. “I don’t think there’s anything malicious, but I do think that if they were in the area, they would 100 percent know what’s going on. But they could be from literally anywhere in the world. Maybe they just met Max and were like, ‘Hey, let’s go hike the peak.’ I feel like there’s still the chance that we ID that couple, but it’s a needle in a haystack.”

While Wiley is no longer on the ground in Mexico, the search for his brother hasn’t ended.

“From a standpoint of somebody being injured—you know, 30 or 40 days—at that point it becomes more of a recovery,” Wiley said, before telling me that his father was still actively searching.

“My dad’s been down there since [December] 29th. He wanted to continue,” he said. “That’s what he felt he needed to do. He’s been working with local Mexican guys sweeping down the logical remaining areas… shit, I don’t know how many canyons they’ve swept, but it’s a lot. They still haven’t found anything. Every rancher in the area and every guide; they’re all aware of the situation and on the lookout. Those people have been incredibly helpful and supportive. If he’s up there or his body is up there, I feel like at some point we will find something and have a form of closure for our family and all the loved ones that have supported us throughout this journey.”

If you have any information about Max or the mystery couple, the family can be reached on Facebook. You can donate to the cause on GoFundMe.