Meet Carter Doorley, the 11-Year-Old Who’s Surfed 749 Days in a Row… and Counting 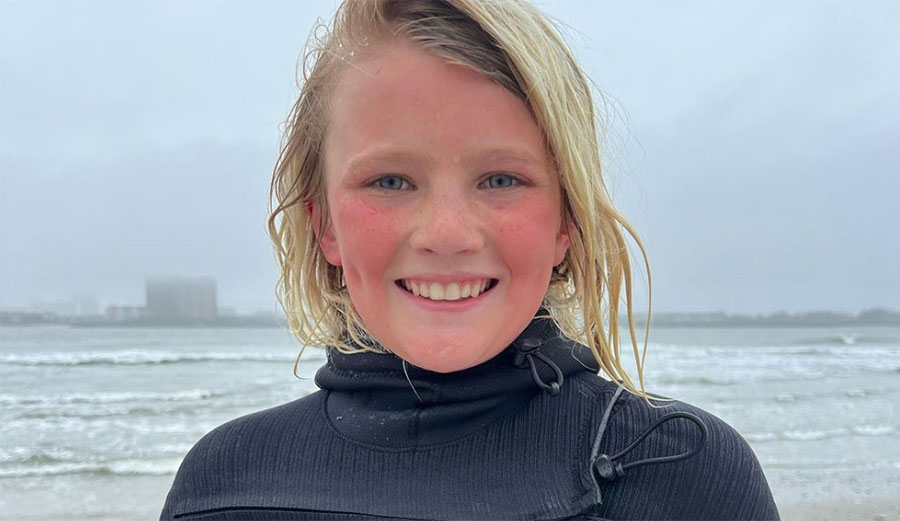 Carter Doorley is only 11 years old but he’s already accomplished some pretty incredible things. Surfing is often described as a selfish activity, but for Carter, it’s all about helping other people and having fun along the way. As of June 10, 2022, he’s surfed for 746 days in a row — and most of it for charity.

A little while back, when we ran our annual Film & Photo Challenge, Carter sent in a submission. And while he may not have taken home the win, he certainly caught our eye.

Carter started surfing when he was five. He mostly taught himself, but he had a little help from his dad, who used to push him into waves. “He’s a little bit of a surfer,” Carter told me, “but he’s a lieutenant on the beach patrol. He’s a fireman in Atlantic City and he builds houses, too. He’s really cool.”

When the pandemic hit, all of Carter’s playgrounds and skateparks were closed, but the beaches weren’t. He spent his time surfing more and more and decided that he wanted to surf for 100 days in a row. When he hit that mark, he just kept on going. “I haven’t stopped yet,” Carter said. “My arms to get a little tired after surfing for six hours.”

The idea to use his surfing to raise money for charity came pretty naturally. He’d already racked up a lot of days, but when his mom saw a post that a local animal shelter needed help in 2020, he jumped in with both feet. He started a fundraiser.

“My mom saw that the Funny Farm, a local animal shelter, posted that four kittens that were very sick and helpless got dropped off,” he explained. “I knew I wanted to help, so I surfed a wave for every dollar donated. I ended up surfing like 334 waves.”

From there, his idea steamrolled. So far, he’s raised over $500 for the True Spirit Coalition, $1,500 for SurfAid, $150 for Heart of Surfing, and $150 for the Humane Society of Atlantic County, and collected over 2,000 canned goods for a local food pantry, skateboards for his local skatepark, and Valentine’s Day cards for military members. And of course, he cleans up any trash he finds on his daily mission to the beach. Most recently, he raised $1,049 for Save the Children to help kids affected by the war in Ukraine. “Helping people is a lot of fun,” he said.

Although Carter often surfs alone, he told me he’d rather surf with his friends. They, of course, aren’t surfing every single day, so Carter is often out there by himself.  “They think it’s actually pretty cool and they think I’m crazy for doing it for this long,” he laughed. “But I’d rather surf with my friends. I don’t really like surfing by myself.”

His parents, as you’d imagine, are extraordinarily proud of their son. “It is wild,” his mom said. “I’m just happy that he’s found something that he loves and that he’s passionate about. He’s just hoping he can make a difference by inspiring other kids to give back, too.”

Carter has a new goal in mind: 1,095 days, or three straight years. The World Record of 10,407 consecutive days surfing was set back in 2004 by Dale Webster, although he kept at it with his record now standing at 14,642 days. While Carter might still have a ways to go to break that, he’s not in it for records… he’s in it because he just loves to help. And that’s something that we could all learn from.