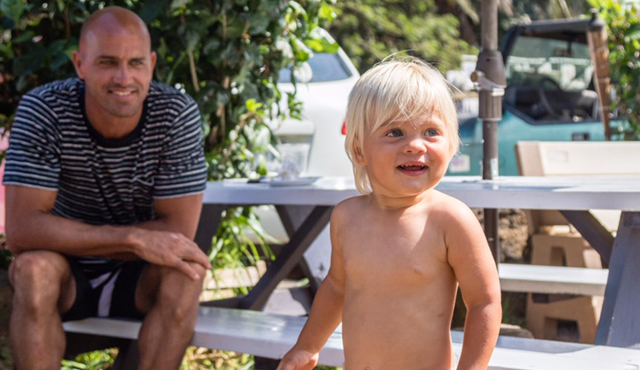 Kelly Slater catches up with Van after he and his mother were taken out by a rogue wave. Photo: Chris White

A massive El Niño-fueled pulse hit Hawaii on Wednesday with walls of water in the 25-30 foot range. Besides a few outer reefs, the only (semi) surfable spot on the North Shore was Waimea Bay. Local boy Luke Shepardson got the wave of the day at the Bay while other big wave heavies like Kelly Slater, Ross Williams, and Mason Ho struggled to even make it out.

After his Waimea #WalkofShame Slater checked a few other spots, stopping at Rockpiles to see if Log Cabins was working. And while he was in the lifeguard booth watching the waves, a harrowing incident went down on the bike path nearby. Sarah White of Perth was walking with her baby son Van when a rogue wave sent the both of them to the ground and screaming for help. Kelly, as well as the North Shore Lifeguards, came to their rescue.

This morning The Inertia spoke with Sarah, an accomplished interior designer, and her husband Chris (a prominent surf/bodyboard photographer) who have been vacationing on the North Shore for the past few weeks to hear the harrowing tale:

I was going on a routine walk along the footpath with my son in the pram. I had my headphones in so I couldn’t hear much. But I was aware there was a big swell. I was walking along near Rockpiles and I could see where the water had come out to on a previous [wave]. As I was crossing, I thought I’d just take my path a bit wider. But before I knew it, there was a big blast. It blew us onto our side. I skidded across the road, holding onto the pram. I slammed into the fence. I called out for help and Kelly Slater and the lifeguards came to help. 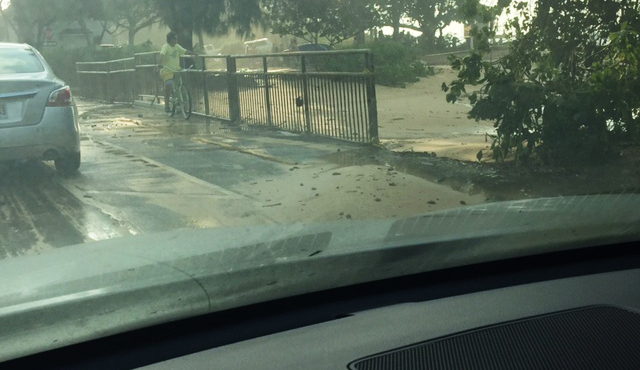 The scene where the rogue wave went up on the road, knocking over Sarah and her son. Photo: Chris White

[Kelly] helped with the pram first, because it was on its side. When we got slammed I was holding onto the pram but at some point I lost it. I had lost sight of my son. And I started yelling out for help. I was worried that another wave was coming and I just wanted to get my son above water. I think Kelly was the first one to come. He got the pram upright. Once it was over and calm, he gave us a lift home.

I got quite a big scrape on my thigh, that’s the main one. But my body is quite sore. I’ve got grazes on my back and shoulder…and, my butt cheek. Van is totally fine. When we got him out, his mouth and ears were full of sand but no scratches. He was strapped into the pram the whole time, which is so lucky. Otherwise he would’ve gone underwater. 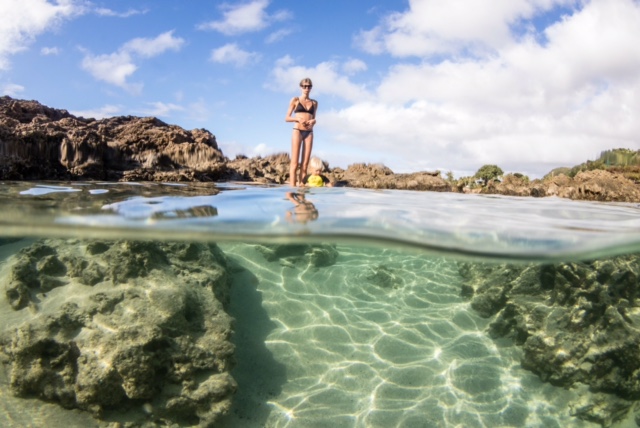 “I just wanted to get my son above water,” said Sarah White. “I think Kelly was the first one to come.” Photo: Chris White

At this point, Chris jumped in:

The pram looks like it got hit by a truck. Punctured tire somehow. I didn’t see it happen but Kelly was describing it. He said it was pretty bad…he said it looked like one of them tsunamis in Thailand or Japan or something.

Yesterday we caught up with Kelly. He was stoked to see Van. He’s really good with kids.

He invited us to his house to come swim in his pool and stuff. He’s such a legend! 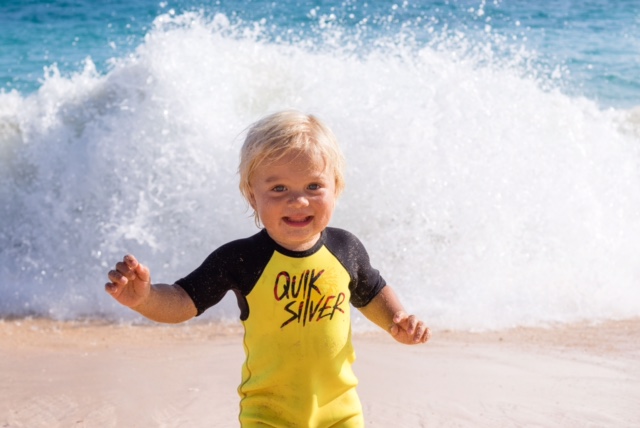