This mountain lion does not care that Ocean Beach surf could get big this week. This lion doesn’t care if you surf. This mountain lion, caught on film in a Pacifica, California neighborhood by Timothy Kerrisk, is just a big, wild animal, possibly looking for an easy meal in the San Francisco-adjacent surf community.

“I thought it was somebody’s dog that had gotten into the yard and I was like, ‘hey get out of here,'” he said. “Then it turned and that’s when I was like, “oh my god! it’s a mountain lion!”

The lion clearly looked as though it was eyeing the kids in Kerrisk’s video, above. In an elevated angle caught from the other side of the street, you can see as the lion escapes out the side gate (circled). Not small: 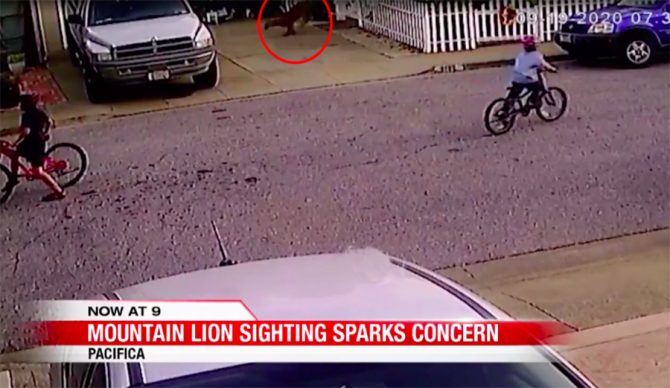 The lion is circled, above. Photo: Screenshot

When the Kerrisk yelled, it apparently made its getaway, slinking over the fence into his driveway before sliding stealthily under the truck. The same lion might be roaming that neighborhood serially as Kerrisk posted another video to his YouTube channel of a similar-sized cat in his community a day later.