My Wild Night with Kelly Slater and Jiff the Pomeranian 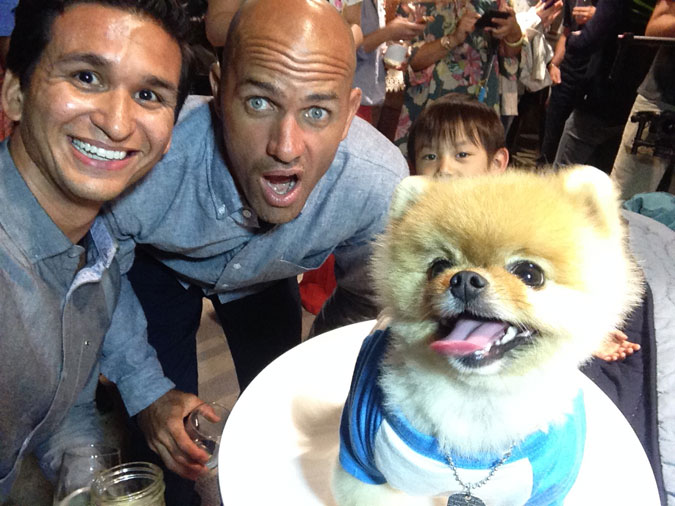 Kelly Slater, JifPom, and yours truly. This is the shot that didn’t make the cut for @theinertia’s Instagram. Whatevers.

Here’s what I learned in what might have been the most obnoxiously fun evening ever. If the Price is Right had a “Surfer’s Fantasy Package” showcase, the opening bid on my night would start somewhere in the eleventy million dollar range. Below are a few lessons learned from my night at a little shindig at the WSL Headquarters celebrating Kelly Slater’s new line of furniture from PBteen.

“Eleventy Million and one dollar, Drew”

1. Never pass up the chance to hang with Kelly. Never.
He’s The Champ. He stands for just about everything our collective community wishes to be. So when asked to meet him at the WSL Headquarters for the launch of his new PBteen eco-friendly furniture collaboration, it was an obvious “Yes” on the RSVP. I’d met Kelly twice before, but both times in passing. This was my chance to get some quality time with the artist formerly known as Jimmy Slade. So what did I ask him once the cameras were rolling? What would you ask him? I thought about that all day leading up to the big moment. You know what I realized? It doesn’t even matter. He’s a smart man. Our conversation will be interesting. So he fills me in on the new MTV-Cribs-style furniture he helped design in collaboration with the good folks at PBteen. Eventually, the conversation slides into life post-Quiksilver and how that move paved the way for opportunities like tonight, what is and isn’t working for him through The Tour’s first two stops, and even how much longer it might be before he hangs up his contest jersey. What did he say? I’m going to Ryan Seacrest this and make you wait for that one. Tune in next time.

2. Super famous dogs are way better wingmen than professional surfers.
“That dog has more followers than Kelly”, somebody whispers to me. Kelly is currently on one of his new couches talking to another reporter. Jiff The Pomeranian has just walked into the building with a Floyd Mayweather-esque entourage. He’s dressed in a cool white tee with blue 3/4 sleeves that all the ladies clearly love. In fact, Jiff is such a hit that pretty much everybody at this PBteen/WSL soirée seems to forget the best surfer on the planet is the man hosting the party. Cameras are flashing left and right and instagram posts are through the roof. Clearly I need to get on the bandwagon. I announce that I’ll be back with my own @Jiffpom photo. Not much later, Kelly himself seems to be in the same state of wonder I was in upon Jiff’s arrival. He leans in to me, makes a joke about how much attention the tiny Pomeranian is getting, and we decide to join the masses with our own selfie. Me, Kelly, and a dog that does handstands, surfs, and is rumored to have dated Anastasia Ashley. This is the best photo I’ve ever taken. No need for crazy filters or the perfect caption. It’s just an all around solid shot. The shot of the day, I might add. Naturally, there are babes at this shin dig. Word gets out of our three amigos photo and all said babes want to see it. Babe after babe after babe. “I hear you have the best photo of the night,” they inquire. Ice breaker attained.

3. All good things will come to an end.
It didn’t take long to be reminded of this one. I got home from my night of hanging with an 11-time world champ and suddenly my phone vibrates:

“SHUT UP!!!! JIFFPOM WAS THERE!?!?!?! That is my favorite person. I am SO jealous that you got to hang with JIFFPOM.”

“LET’S POST THAT ASAP. I COULD NOT BE MORE JEALOUS”

You see, Inertia Founder Zach Weisberg has a bit of a man crush on Jiff. He’d asked me to go to the PBTeen party while he attended another event kicking off the Oakley Pro. The decision was made to miss out on a night with Kelly, but now that he knew JiffPom was also on the guest list regret had clearly settled in. A few moments later another message popped up on my phone.

“Are you going to be mad that we crop you out of the Insta post?” 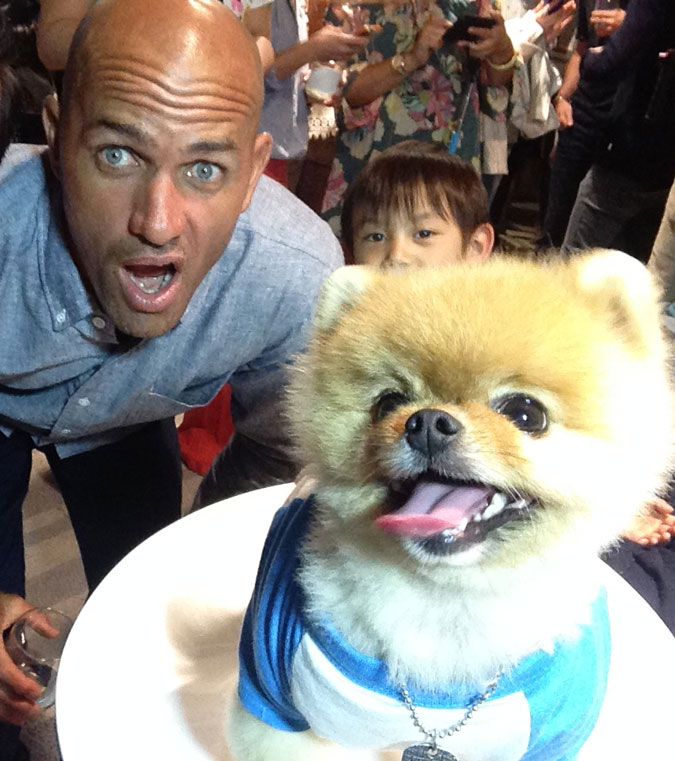 This shot made our Insta. With a regram from @JifPom. Again, whatevs.

One repost from @JiffPom himself and over 60 thousand likes later (without the cheesin’ ear to ear grin of yours truly), and I still haven’t given my official stance on that request. But you better believe said Inertia Founder is still holding a grudge against me. So crop me out of that photo for all I care. I know I was there with the world’s best surfer and the world’s luckiest surfing dog. Nobody can take that away.

Sure, trading waves with Kelly Slater would be cool, but who really wants to be reminded of where they stand in the realm of late take offs and top turns? Talking story over a drink with The Champ is something that will be hard to top. Now, if Jiff wants to keep being a solid wingman and invite me to his next party with Anastasia Ashley and that just so happens to conflict with another invitation from Kelly? Well, I can think of a certain person in The Inertia office who might make make himself available while I party with the cuddly Pomeranian again. Besides, by now he’s probably got a firm grasp on lesson number one. What he still doesn’t know is all the shenanigans that were still to come…

First, off to Vegas for the Fight of the Century 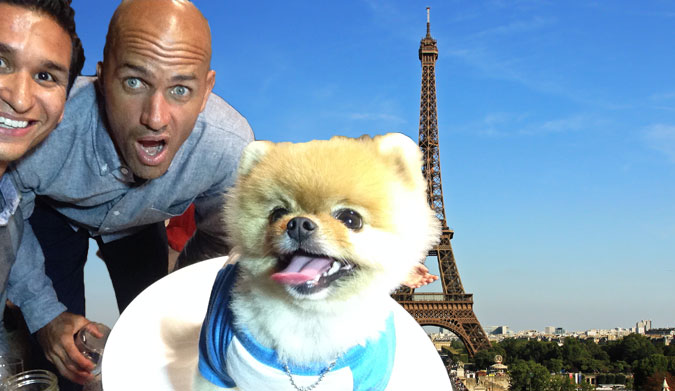 Time for a casual stroll through the streets of Paris. 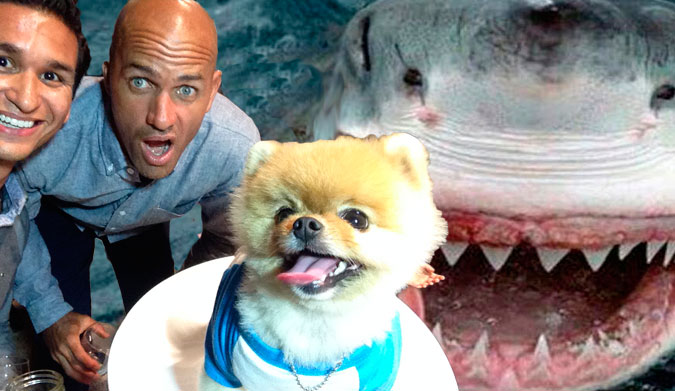 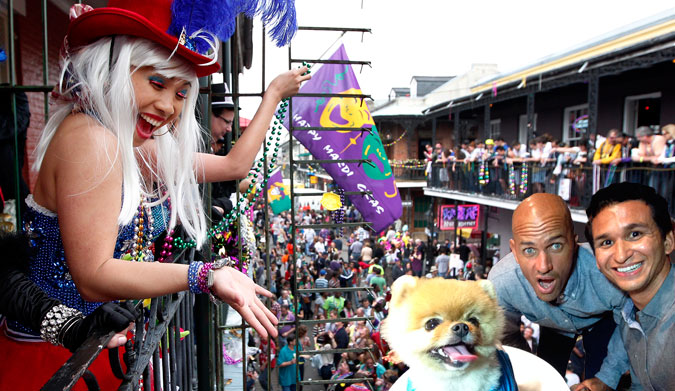 Our last stop was Bourbon Street because why wouldn’t we? JiffPom slayed it with the beads.