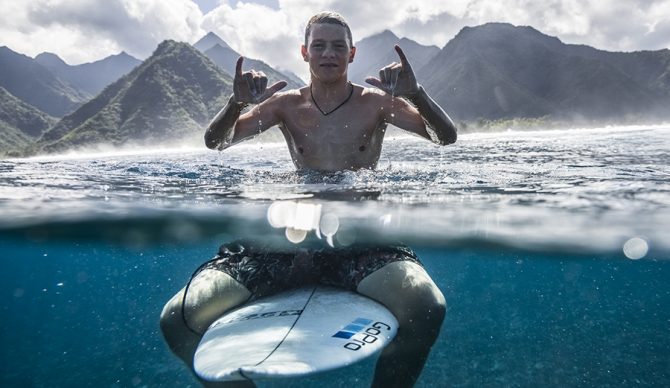 Prodigies are prodigies for a reason. They have to want it. And this kid wants it. Photo: Domenic Mosqueira

“I saw a few waves go through that nobody really looked at and then a bigger one came. I saw my older mate Zac Haynes make a move and Ivan Florence too, but I was deeper,” Ned Hart recently told me. “I just put my head down because I knew I had to catch one. I got to my feet, held my line and the wave did the rest.”

Hart was surfing Teahupo’o during the last, and biggest, of the swells that have hit Tahiti in the last month. In that spell, perhaps a few dozen perfect, 10-foot plus waves were ridden by an all-star cast of locals and international pros. That was the only one though snaffled by a 15-year-old Aussie, on his first trip to the End of the Road.

“The only negative was that I missed Ned’s wave,” chimed in Ned’s mother Adele from the background. “Our boat had to go back in to pick up some passengers. When I returned all the crew in the channel were saying how Ned had caught a big one.”

Adele and her husband Paul are both English, and Ned too was born in the UK. The new family moved to Dunsborough, 50 miles north of Margaret River, when Ned was just three months old. Paul, a keen surfer, taught Ned how to surf, and from a young age he gravitated towards bigger waves. “He’s always chased big barrels, right from the start out at his local wave at Supertubes, he just loved it. It’s hard to explain where it came from,” says Adele. 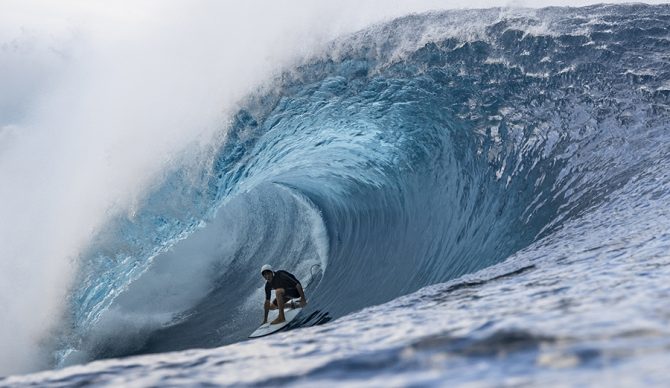 Waves like this will put you on the map really fast. Photo: Domenic Mosqueira

While he entered various junior comps and had some limited success, Hart never found them as much fun or fulfilling as big waves. Before he was a teenager, the pint-sized kid with the trademark white helmet was turning heads at local spots like The Box, North Point, Main Break and Gnaraloo. The mentorship of local big-wave legends like Jarryd Foster, Mick Corbett, and Paul “Antman” Paterson added to his early development. Not for nothing did he gain the nickname “Overhead Ned.” Comparisons to Jack Robinson, who paddled the same path ten years earlier, were made. It is Russel Bierke however that might be a better yardstick in terms of a big-wave prodigy.

On a trip to Indonesia at 12 years old, Ned befriended Mason Ho and Nathan Fletcher, who had been impressed by his backside efforts at solid Desert Point. They persuaded the Harts to travel to Hawaii, and further test his big wave chops. The family made the first trip two years ago and came under the eye of John Pyzel, who put the hard-charging grom on his team. With COVID approaching in early 2020 the Harts managed to get that last flight out of Oahu before Western Australia shut its borders for 18 months.

“We went straight back to Hawaii as soon as it opened up this last winter,” said Ned. “I trained with Kahea Hart and managed to score one really good wave at Pipe, which was epic. Jon also made me a load of boards to take to Tahiti.” In preparation for a Tahiti trip, Ned also worked with Claire Bevilacqua doing aqua and apnea training.

Enrolled at Margaret River High School under an athlete endorsed program, he is allowed to do a substantial part of his class work online. So when the latest swells lined up for Teahupo’o, Adele and Ned decided to head there for as long as the waves lasted. Paul, a plumber who works for Rio Tinto in the Western Australian mines, couldn’t make it due to the possibility of the borders again shutting. By the time Ned scored his big one at Chopes, he’d been there almost a month and had surfed through three swells.

“On this trip, I’ve learned everything takes time. At the start I thought I’d rock up and get some bombs,” says Ned. “I know now that learning the lineup and getting comfortable out here takes time – it’s so much gnarlier than it looks.”

With a brief flat spell in Tahiti before another round of potential XL heading their way, mother and son were heading to Moorea where Ned, a keen spearfisherman, was due to perform some volunteer work pearl diving. On their return, there is one last crack at Teahupo’o, a sixteenth birthday celebration, and time to prepare for the next phase of accelerated big-wave education.

“I’d love if this was my life, like a job. I just have to keep trying to get the best waves I can and keep chasing swells. I want to make a career out of this,” said Ned.

“All the advice we’ve had is that it feels like it’s a good time to press go,” confirmed Adele. “If we can manage the online school course then Ned can give this his all over the next two years. If he continues to love it as much as he has so far, then we’ll back him all the way and see where it takes us.”