All-Time: How a Fogged Camera Housing Led to This Stunning Teahupo’o Photo 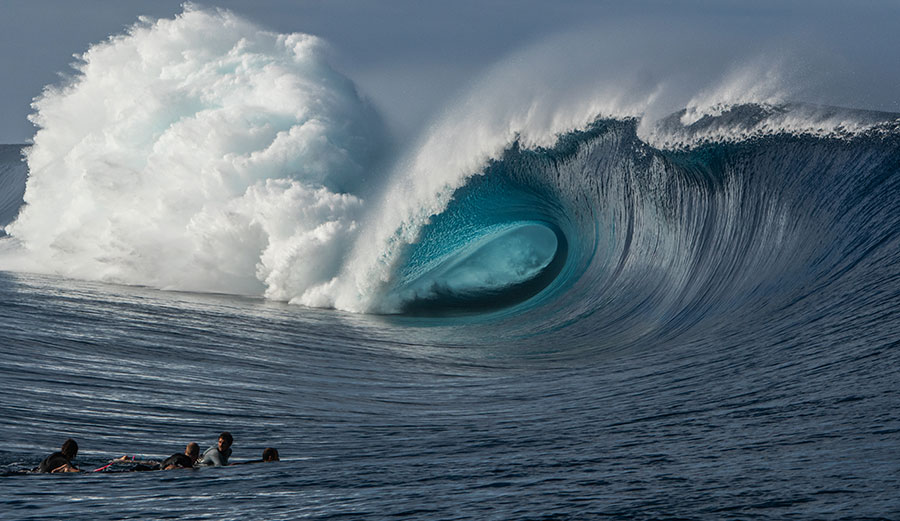 On May 28, a massive swell rolled through Tahiti. The forecast had called it correctly, and Owen Beim, a freelance photographer based in California (and winner of the Black & White category in The Inertia‘s recent Film & Photo Challenge), captured one of the best photos he’s ever taken.

There were two swells back-to-back, and both were the kind that attracted a lot of attention from those who keep a close eye on the charts.

“About a week prior to this photo being captured,” Beim said, “I was talking with three of my close friends, James Ferrell, James Sarandis, and Kalani Cummins, about this swell heading to Tahiti. I was still in school, but had a big opening due to Memorial Day coming up. After talking to some local boys, I pulled the trigger, alongside the other three boys.”

They had a certain day in mind that looked like it was going to be the day, but they showed up early just in case. They’d spent nearly a week there waiting for the 28th, and already their memory cards were packed with incredible images. But when dawn broke on that particular morning, Beim hoped that the swell would live up to their expectations.

“By the fourth day, I already had a few unbelievable days shooting there,” he said. “The day we went there for finally came. We had our own little boat and docked at the buoy a bit after sunrise. The swell was still filling in and was not quite tow size yet, probably 8-12 occasional 15 feet. It was raining and I set up my water housing on the boat and unfortunately, my lens port began badly fogging while I was in the lineup.”

After traveling thousands of miles and waiting for this one particular moment, Beim, as you can imagine, was not overly-stoked about a foggy port on his camera housing. But funnily enough, that fog led directly to a chain of events that put him in the spot to take the photo you see above.

“I kept on swimming back and forth to the boat and the channel, scrambling to fix the fog because it was definitely the best waves I have ever seen in my life and I felt like I was completely blowing it,” he remembers. “The third time I swam back after my port fogged again, the rain stopped and I was just letting my housing air out, trying to let my port dry and get adjusted to the outside temperature.”

Beim, of course, had more than one camera, and he thought that now was as good a time as any to use it. “I brought out my second rig with my 70-200 mm lens and figured I would just shoot a few from the boat,” he said. “When the bigger waves came, there was a perfect angle looking straight into the barrel. About two minutes after I set up my other camera, this wave came in and it was the biggest wave I saw in the morning.”

Had he still been in the water, the photo of this wave would have been entirely different. And to Beim, that fogged port that had him on the boat, using a different camera, turned out to be a blessing.

“It was good karma that my housing did fog,” he said. “If it didn’t, I would have probably gotten a water shot from the channel, but that angle wouldn’t have been nearly as good as this one. After being super bummed, my whole morning turned around and now I was ridiculously stoked. This was actually the only wave I shot with my 70-200 because the fog in my housing was gone. I jumped back in the water for 6-7 hours until I was starving, dehydrated, and physically exhausted because the waves were so good. It was no doubt the scariest but best day I have ever shot in the ocean and it will be engraved in my brain forever.”