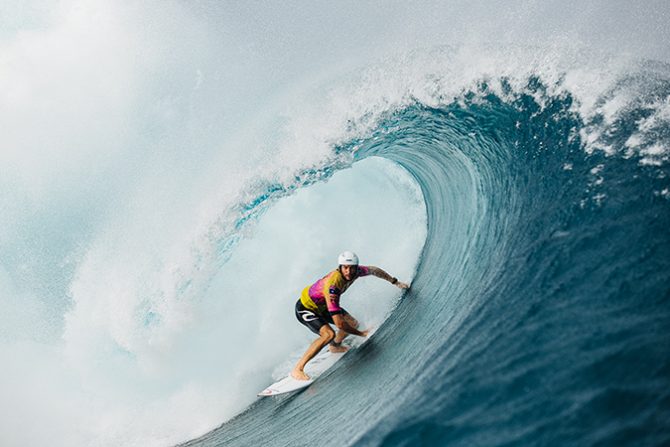 Helmets are anything but accepted accessories in the style-sensitive world of surfing. But  Teahupoʻo at eight-12 feet is different. With the Tahitian slab working its ferocious magic during today’s contest, at least a couple of CT surfers dumped style on its head in the name of safety, donning Gath helmets to protect themselves against mishaps with the shallow reef.

The first was Owen Wright in his heat against Soli Bailey. Owen, who of course suffered a serious head injury in 2015 at Pipeline that forced him to miss the following season, used a glowing white Gath to protect his dome as he took down Bailey in the Round of 32. 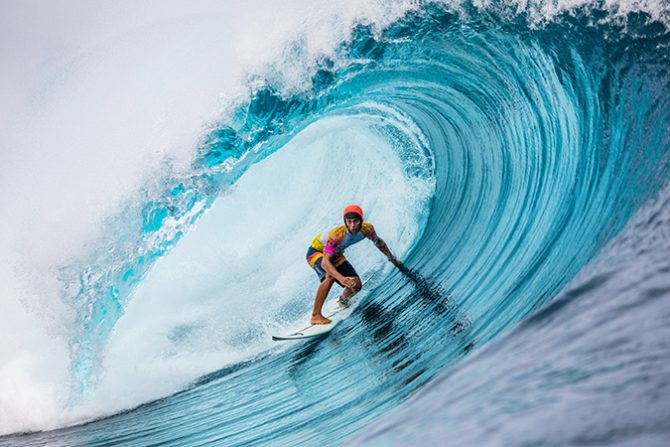 Kauli Vaast with the upset of the year thus far. Photo: Cestari/WSL

Next up, Sebastien Zietz entered the lineup wearing a black Gath during his heat against Michel Bourez. Seabass took a gnarly trip over the falls, pretty much playing out the nightmare of every professional surfer as he became the wave and washed violently across the shallow reef. The helmet might have been a good call there (and available to all competitors via the WSL, apparently). Wildcard and Trials winner Kauli Vaast (who knows this reef well) wore head gear in his upset of World Number 1 Kolohe Andino (tough loss for the only Californian to hold the ratings lead in the last 23 years). 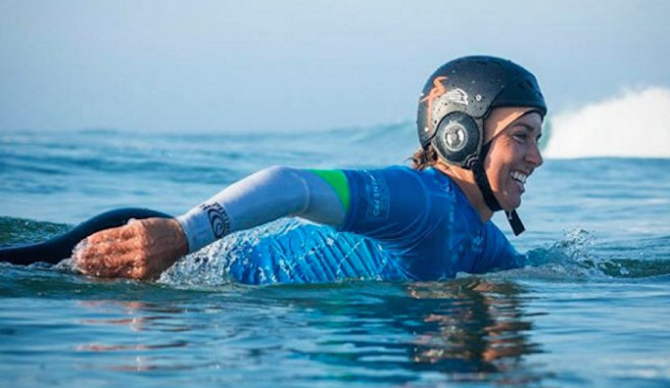 After bursting her eardrum in Fiji. Photo: @sally_fitz

“With the head injury stuff in the past, and this morning the forecast was big and getting bigger, there was opportunities for eight-foot set waves and this just saves a trip to the hospital for stitches,” Wright told Rosie Hodge. “(The helmet) kind of allows you to go harder, too. It gives you (confidence) and (an) ‘I’m gonna go no matter what’ (mentality).”

There have been several surfers in recent memory don Gaths to protect the dome. Sally Fitzgibbon used one in Fiji (and then at the US Open) after an eardrum issue in 2015. Jeremy Flores also won Teahupoʻo in 2015 wearing a lid after suffering a serious head injury prior to the event. Both ceased wearing them as soon as they could. Let’s face it, we like to wear as little as possible when we ride waves.

Pro, con? I’m more of an event-by-event guy on the helmet thing. It’s situational. Tom Caroll made it look okay:

Watch the webcast from the Tahiti Pro Teahupoʻo here.