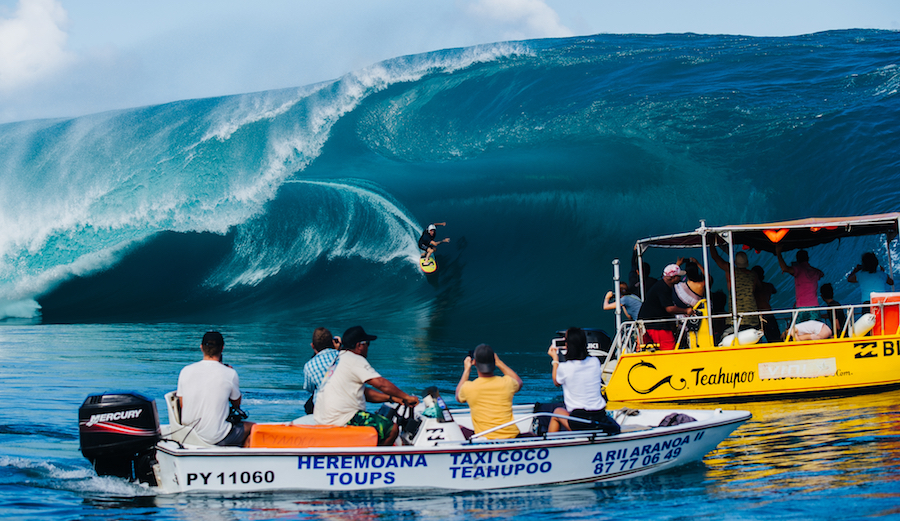 If surfers are going to compete for gold, shouldn’t it be here? Photo: Matt Dunbar/WSL

Earlier this year, the French news outlet AFP revealed rumblings in the Paris 2024 camp around a novel plan proposed by the president of French Polynesia, Edouard Fritch, to ensure that Olympic surfing in 2024 is unforgettable. Instead of holding the second installment of Olympic surfing at a French beachie like La Gravière or in Biarritz, the plan said, why not up the ante by holding the event in Tahiti?

Recent news suggests that Tahiti may not only be in the running, but it may even be a favorite among French organizers. According to AFP by way of The Guardian, Tahiti is reportedly “under serious consideration,” even though the International Olympic Committee has openly said it would much prefer to keep Olympic events as geographically close to the host city as possible.

“The choice is in the hands of the [French] organizing committee,” said Thomas Bach, president of the IOC, back in July. “But I said in June, and I haven’t changed my mind, that my personal opinion is that if you have two or more candidate sites, of the same sporting level, I definitely prefer the option that is closest to the center of the Games, so that the athletes and spectators can profit from the atmosphere of the Olympics.”

In other words, the IOC wouldn’t be mad if France decided to have an Olympic surf contest at Teahupo’o, they’d just be disappointed.

And while French beach breaks are certainly more reliable and often more exciting than Tsurigasaki Beach during the waiting period for the 2020 Games, consider that there hasn’t been a women’s CT event at Teahupo’o for fifteen years. So, having concurrent men’s and women’s Olympic surf contests there would be particularly historic for a number of reasons.

More as this story develops.