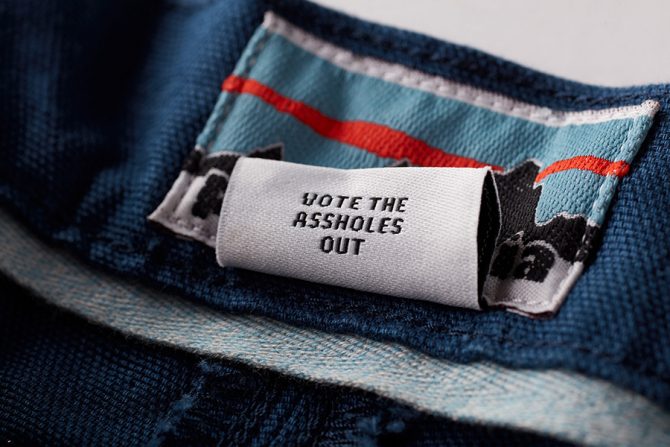 A classic move from a committed company. Photo: Patagonia

You gotta hand it to Patagonia. Regardless of customers they may or may not lose, the clothing brand is committed to its cause: the health of the world we’re living in. The integrity of the presidential office. And at this point in the dumpster fire that’s been President Trump’s first term, it’s nearly impossible to disagree with them.

Knocking on the doorstep of one of the most important elections of our lifetimes, a picture of a tag apparently sewn into a line of Patagonia clothing started making rounds on social media this week – “Vote the Assholes Out.” After checking in with Patagonia’s PR people, it is in fact real:  “They were added to our 2020 Men’s and Women’s Road to Regenerative Organic Stand-Up Shorts because we’ve been standing up to climate deniers for almost as long as we’ve been making those shorts,” reads an email we received. I might not wear them but I get the sentiment:  “Yvon Chouinard has been saying ‘vote the assholes out’  for several years and it refers to politicians from any party who deny or disregard the climate crisis and ignore science, not because they aren’t aware of it, but because their pockets are lined with money from oil and gas interests.”

Before you yell “libtard” or “snowflake” or whatever other cliche you can conjure (please don’t use the word “narrative”), consider this: I’m an American. You’re probably an American too. This country is great. I’m glad I live here. I understand that the pendulum of American politics must swing for us to remain balanced. But climate change and racism aren’t really partisan anymore. They’re things we need to work on to improve humanity. And doesn’t the office of the president need to be treated with the utmost respect? With humility, with kindness, with compassion? If not, call me unhinged if you must.

That’s not happening right now. Frankly, some of the antics are absolutely appalling (see embarrassing, ugh): re-tweeting racist memes, failing to condemn domestic terrorists,  and completely denying that climate change is real despite science to the contrary (not to mention downplaying COVID-19).

I’ve no doubt there are honorable Republicans that could have handled 2020 with more grace (Senator McCain comes to mind, RIP, and  Mitt Romney), so don’t confuse this with a partisan rant. But in this case, Patagonia’s right. The current president’s an asshole. It’s time to vote him out.