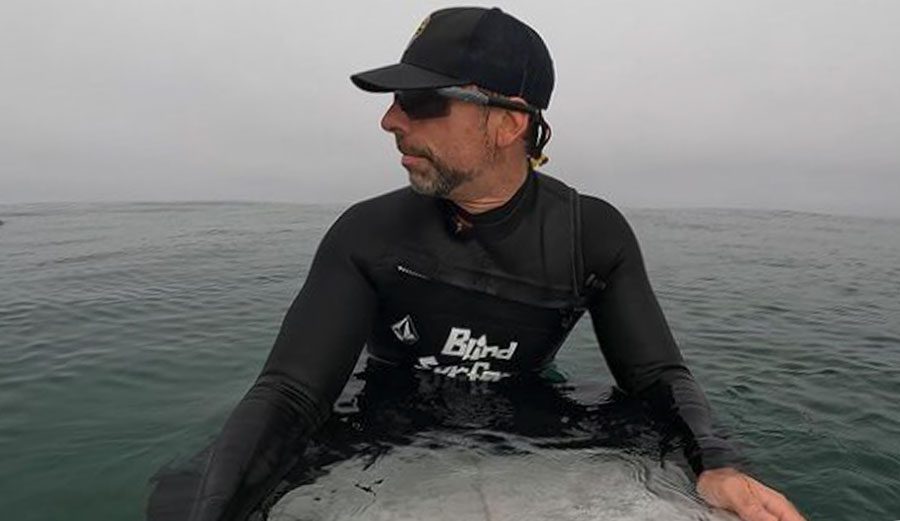 A few years ago, I was alerted to a new-ish YouTube channel called The Blind Surfer. It was an interesting premise — surfing is hard enough to learn when you can see — so I gave the channel’s owner a ring to see what it was all about. And what I found was that surfing, although it’s what the channel hinges on, isn’t the most interesting part of Pete Gustin. And as it turns out, I wasn’t alone in finding The Blind Surfer interesting. The channel just surpassed one million subscribers, officially making it the most popular YouTube page in the surfing sphere, which, until now, was a position held by Jamie O’Brien. Gustin’s rise to a million subs happened incredibly quickly. So quickly, in fact, that the people from YouTube contacted him to see what, exactly, he was doing.

“They don’t really know what makes the algorithm go,” Gustin told me over the phone. “They built it, but they need to gather real-world data to figure out exactly what’s going on. They called me up and they were like, ‘what are you doing?'”

A quick bit of backstory on Pete, just in case you haven’t been caught up to speed already. Pete’s show isn’t so much about surfing as it is about showing people that, to use an old cliché, anything is possible if you set your mind to it. Surfing is the vessel for the message, and it works very well. He also happens to have a job that all but guarantees you’ve heard his voice. Gustin has been the voice of Super Bowl ads and countless network TV promos. He’s voiced commercials for The Walking Dead, Archer, Family Guy, and SpongeBob, to name a few. Recently, he landed a gig as the voice of Optimus Prime (Transformers).

Gustin wasn’t always blind, although he started going blind the day he was born.  He has something called Macular Degeneration, in which the central vision deteriorates over time.  When I first spoke with him in 2020, he could still see blurry shapes and dim shadows up to three feet away, but in the last two years, even that vague bit of vision has faded. Now, he has almost no sight left.

“When I started the channel, I could actually walk down the sidewalk by myself, for the most part,” he remembered. “I might miss a person here or there because I had blind spots, but in the last three years, I have to hold Banana’s hand (Banana is Pete’s nickname for his wife) or get in right behind Josh and Brooks and have them break the way (Josh and Brooks work on the channel with him). I’m learning to use a cane now. The world is really, really shutting in on me. I can’t see anybody’s face anymore. I can’t see myself in a mirror.”

Gustin’s show, as I said, is about showing people that anything is possible. Through his journey of losing his eyesight, he’s managed to keep a smile on his face and roll with the punches in a way that, I suspect, is unique to him.

“People will sometimes ask, ‘Do you want your eyesight back? Then you couldn’t be the blind surfer!’ I didn’t want to be the blind surfer,” he laughed. “I wish I was just a surfer. But you’re given a situation and you just make the most of it. I think of my everyday life as a lottery ticket with everything I do. Like with voice acting: I could get a huge blockbuster movie. The breaks that come my way at my level of voice acting can be huge. Getting to play Optimus Prime was huge for me. These are the things I wake up with on my mind: ‘This might happen today!’ Every day I get to wake up with a possible golden ticket. But then, you know, every day I’ll be walking down the stairs and accidentally drop my cell phone and spend five minutes screwing around trying to figure out which stair it landed on. Those moments don’t just happen once a week — they happen multiple times a day.”

Pete’s perception on life is, I think, what attracts people to his channel. He’s managed to bring surfing to the non-surfing world in a way unlike anyone else. Where Jamie O’Brien presents an idyllic life, full of non-stop adventure, travel, and perfect waves, Pete Gustin presents hurdles, then shows how he manages to overcome them. Jamie’s channel could be viewed as vicarious entertainment while Pete’s is, perhaps, a little more inspirational. Both are valuable in their own way, but Pete’s niché probably has a bigger potential viewership than the relatively small pool of core surfers that Jamie’s is likely to attract.

Another fascinating element of Pete’s channel is his unabashed honesty about his situation. While he is upbeat about it, he doesn’t shy away from the fact that it’s extraordinarily difficult. He makes no bones about it that he’d prefer to have his eyesight back, but sometimes he worries that might take away something for the viewers.

“Does it?” he wondered. “Like, should I want to live my whole life fighting the struggle? I don’t think they understand that I’ve been fighting this for a long time, and if this is something that has made me who I am… okay, cool. Now can I have my eyesight back? I’ve fought the struggle. I’ve learned the lessons. I feel like if this were a movie, once I’d finally achieved everything, someone would be like, ‘Great, now you get to see. Now you get to live your life. It was a learning lesson.’ I’d love to be able to drive myself to the grocery store. I would love to be able to see Banana’s face. I hope that doesn’t take the shine off of it for anyone.”

“I feel like mine is the non-surfing surfing channel,” he chuckled. “I don’t think everyone has this type of story to tell. There are so many lessons I’ve learned from this journey. I could write books upon books about what I’ve learned…. it just got so big. I didn’t expect any of it.”

Personally, though, I think Pete is selling himself a little short. But that’s another part of the attraction to his story: much like the people at YouTube, he can’t quite seem to grasp why the world wants to know about him. It’s more than an algorithm. More than surfing. More than a blind guy figuring out his life. It’s a story of perseverance, of dedication, and of finding a way to make his life as good as it can be despite whatever it decides to throw at him. And that’s good entertainment.