Pipeline World Title Showdown: Who Wants it the Most? 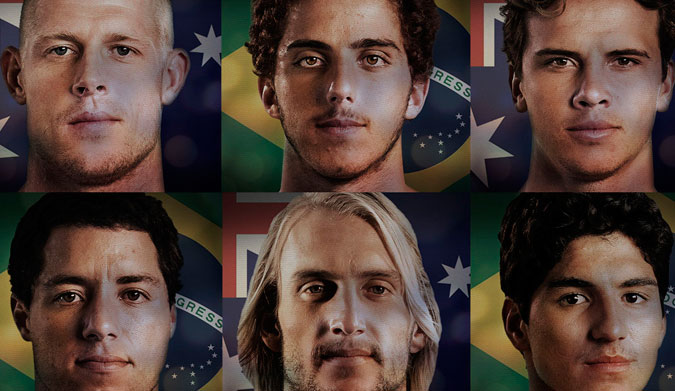 One of these men will emerge victorious. Image: WSL

This is it: the climax of 11 world-class events, the top 36 surfers landing in the spiritual home of surfing, having spent 10 months on tour and competing in eight different countries around the globe. With a feverish hype surrounding the North shore of Hawaii, and everyone who’s everyone in the surf world currently taking up residence along a 10-mile stretch of coast, the showcase event in an already impressive lineup of competitions is set to crown the 2015 World Champion.

It has been a long time since the outcome of a year’s competition been as hard to call. So complex is the possible outcome that the WSL have had to come up with a “world title scenario generator.” Touted as a bit of fun for the fans, you can’t help thinking that more than one of the tour officials have the page firmly bookmarked on their computers. What is clear, though, is that the momentum lies very strongly with three surfers: Mick Fanning, Filipe Toledo, and Adriano de Souza. All of them are going into Pipeline with an accumulation of points that is going to be difficult to overturn. But it’s not a dead cert; Gabe Medina, and Julian Wilson are all in with shouting distance of the trophy, and if some of the big names stumble early on, it’s going to make for a curious few heats of competition. Unfortunately for and Owen Wright, he ended up in the hospital recently, and is now officially out of the race.

In normal contest conditions, you’d have to fancy Fanning. Solid, powerful, and dependable; it’d be the fairytale ending to an eventful tour for this year’s most famous name in world surfing. Lay down a few trademark power turns, rack up a steady stream of 7 and 8 point tube rides to progress comfortably through the early rounds, and the title’s his. Except that it doesn’t work like that at Pipeline. It’s all or nothing. Paddle into the face, drop, pick a line… and pray. Waiting on the other side of the green tunnel is adoration from a beach of cheering fans. And four feet under your board is the dreaded reef. It can only go one of two ways. No favoritism for previous champions, no easy rides for veterans of the wave–when it clamps down, you’ve just got to hope your luck holds.

Looking in on the title race from a few paces back is current champion Gabriel Medina. He certainly won’t want to hand his title over to anyone other than himself. And it may be this deep-seated determination that sees him prepared to go just a little further than his fellow competitors; seeing him sit slightly deeper in the line up, prepared to push more furiously in the barrel, and ultimately be rewarded with the best waves Pipeline has to offer. Or he might just fall harder.

To add further to the challenge awaiting the title contenders, a smattering of Pipe specialists have been given wildcards and allowed to chalk their names up on the contest board. Normally a hurdle that you’d expect to overcome, rather than a genuine threat (Peniche being the exception), the wildcards at Pipe have to be favored rather than dismissed. In a lineup where experience and courage counts for everything, these guys can expect to fluster the big contenders, and will play perhaps the biggest part in deciding the eventual winner of the 2015 World Championship.

Whoever is eventually crowned, one thing is for certain, they will have earned the title. Pipeline is not a place for hiding; let’s see who wants it the most.

This was originally published on Surfingsections.com. Watch the Billabong Pipe Masters live on Worldsurfleague.com.