Should Tow-Surfing Be Included on the Big Wave World Tour After Jaws Maxed Out? 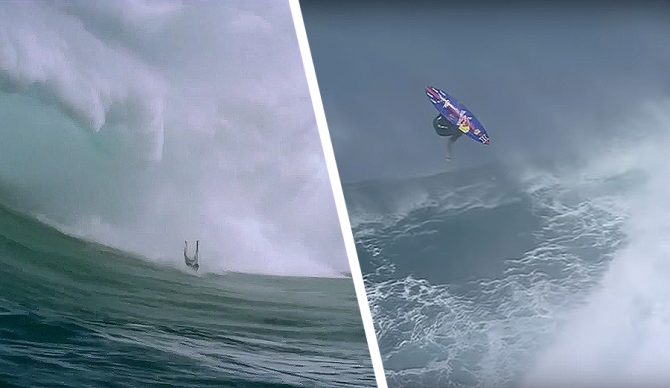 Should tow surfing be included on the Big Wave World Tour?

It’s crazy to even ask this question, right? The thought alone probably has a few purists ripping the fins out of their 10-foot guns and fashioning them into axes.

Tow surfing has given us the Millennium Wave. Tow surfing made Nazaré. It’s given us world records, only to be topped by new world records for the biggest waves ever surfed — which, for now, is Rodrigo Koxa’s 80-foot bomb in 2017. That’s until somebody rides an 82-foot bomb to top it…that they’ll be towed into. But understandably, paddling is still how the best big wave surfers on the planet are measured. And I’d argue it’s how most of them want their skills to be tested. Paddling is objectively more dangerous. The wipeouts are more frequent. And it’s clearly a helluva greater challenge; a better test of a surfer’s ability in massive conditions of massive consequence.

Then Monday happened at the 2018 Jaws Challenge. It might as well have been split into two completely different days on different sides of the Pacific. The women spent their day getting pummeled. And then the men, who started their first heat as soon as Keala Kennelly was crowned champion, didn’t fare much better. In fact, some would argue things devolved. The conditions didn’t improve and the wipeouts became more violent. Technically, there was only one “made” wave from the men on Day 1, a 4.60 by Russell Bierke, according to Pete Mel. Everything else was complete carnage. Grant Baker ended up on the medic’s boat coughing up blood according to firsthand accounts. Billy Kemper, after packing an unwieldy barrel, was knocked unconscious before being rescued. Things got out of hand so fast that Tour Commissioner Mike Parsons told everybody to pack it up until Tuesday when the conditions would be safer and more suitable for paddling.

“It’s a spectacle of epic proportions,” Dave Kalama said on Monday afternoon. “You get so wrapped up in the moment that maybe Mike’s perspective and his job here is to be the smart one. Be the sensible one. And he was able to literally protect the surfers from themselves.”

But it’s not like people just went home. Tow teams took over the lineup as soon as the contest cleared and Kai Lenny, for one, put on an absolute show when just hours before, people were struggling to even make it down the face. Monday turned into the perfect side-by-side comparison of big wave surfing’s two disciplines (and Lenny won the free surf).

So here’s something to chew on: did Monday present us a moment to reconsider the look of competitive big wave surfing? Why not add towing to the Big Wave World Tour in some way, shape, or form?

“They should have a separate tow tour,” she suggested. “It’s so different. And I would hate to see someone that can’t paddle win a world title.”

“What if the Big Wave World Tour just had both disciplines?” I  asked her. “Let’s say Nazaré and Jaws are tow contests, Mavs is a paddle contest, and then the WSL potentially adds Waimea as a paddle contest?”

Am I on to something? Swap out the waves, for all I care. I’m just considering what the BWT looks like if tow-ins get thrown in the mix, rounding out the entirety of big wave surfing disciplines on one tour. Or, at a certain size and unruliness, paddling just transitions to towing. Same competitors. New equipment. The contest doesn’t get called off. The ‘CT schedule is made up of a lot more variety as far as waves go, and that’s designed specifically to test completely different aspects of each competitor’s abilities.

“Nope.” She shoots me down immediately. “Because there is always the possibility that contests don’t get the green light, so it could be decided by one tow contest.”

“Trying to incorporate towing into the current Big Wave World Tour would be like asking Medina, Felipe, and Julian to have a longboard heat to factor into their world title race,” he said. “Tow surfing most certainly has its time and place (as demonstrated the other day at Pe’ahi) but better being kept entirely separate from the paddle world tour.”

Women’s Big Wave Tour competitor Bianca Valenti sees both sides of it. Coming up in the big wave world at Maverick’s and living in a marine sanctuary where skis are prohibited, she has no tow experience but welcomes the idea of it on the WSL’s Big Wave World Tour.

“I’m also wondering if paddle surfing will [reach] new limits with more aerodynamic surfboards,” she adds. “That seems to be where we hit the limit — paddle speed getting into the wave and then maintaining that speed after an airdrop. I like the idea of both and honing in the specific niche.”

What do you think? Should the Jaws Challenge have transitioned to tow-ins instead of getting called off? Is there a place for tow-ins on the Big Wave World Tour?