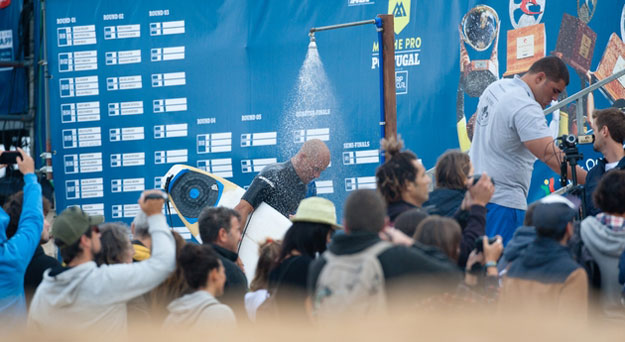 Slater trying to wash the disappointment off. Photo: ASP/Cestari

Things just got a little bit easier for Mick Fanning in his campaign for a third World Title. Kelly Slater lost in Round two to current ASP World Number 96 Frederico Morais.

The Rip Curl Pro Portugal resumed in windy, two-to-three foot chop, allowing just enough time for organizers to complete the first four heats of the second round. Just prior to Slater’s loss, Fanning won his heat, meaning a couple of things – which get kind of complicated when navigating the vagaries of the points system.

Going into the event, Slater needed a ninth or better to take the race to the North Shore, unless Fanning won the event, in which case Slater would have needed a third or better.

Now that Slater is out, and out in a very early round, the door to an early crowning just opened a little wider for Fanning.

Here’s how it panned out, for those of you not either a) living in a country where time zones don’t line up or b) willing to stay up all night to watch:

The waves are junk. It’s small, weak, and windy. It seems like a day that needs to be run just to get through a few heats. There lies one of the biggest problems with contest surfing: contest windows. Fanning paddles out with Francisco Alves in the first heat of the day and beats him handily. Then comes Kelly’s heat against Morais. The heat runs its course with few exciting moments, save for the final ten seconds, when Slater needs a high-six to advance. He doesn’t get it, and Mick tries desperately not to leap onto the podium in early celebration. He does, though, still need to get through a minimum of three heats.

And I, for one, hope he doesn’t make it. As much as I love Fanning’s surfing, professional surfing sucks when titles are decided in junk waves. “I don’t know if I’ll watch much more of the event, to be honest,” said Slater in an interview after his loss. “I think I might leave tonight or tomorrow. It doesn’t look like the surf’s going to be that good all this week. It’ll be onshore wind and get a bit bigger. But it’ll probably be messy surf for the remainder of the event.”

Titles should be decided in perfection with spectators on the edge of their seat, waiting with bated breath for either a celebration or a pummeling of the utmost proportions.

But for now, there is an even bigger chance that Fanning will take his third World Title home… unless he throws it on purpose and chances both Pipeline’s conditions and another contest. How great would that be?