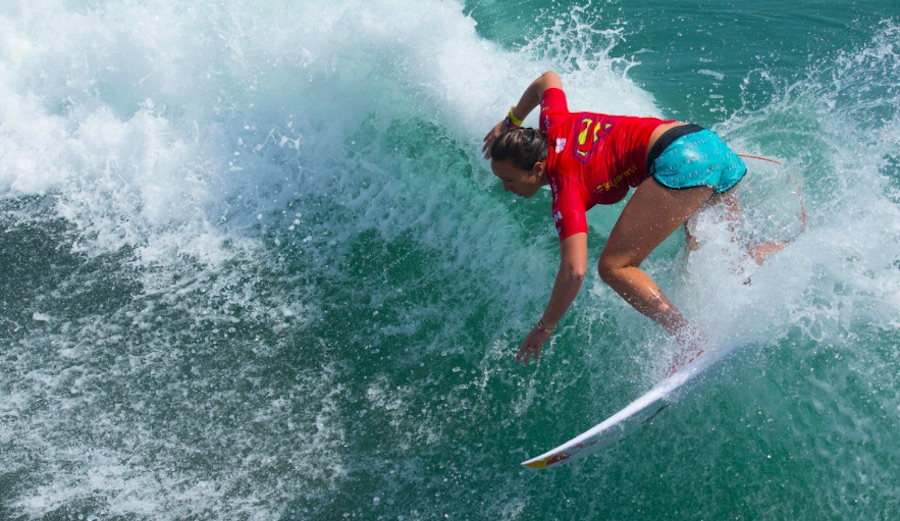 The Supergirl Surf Pro is the largest all-female event of its kind in the world. Photo: WSL/Steinmetz

Annually, the world’s best female surfers – including Championship Tour veterans and a slew of CT hopefuls – descend on the south side of the Oceanside pier for the Supergirl Surf Pro. Since its inception in 2006, the event has grown to become the largest female contest of its kind in the world. And despite surfing’s long, fraught history with sexism, the event has determinedly chugged along, surging in attendance and popularity and waving the banner of female empowerment.

In a recent letter addressed to contest organizers and city officials and circulated to the press, though, a San Diego-based law firm is alleging that holding an all-female surf contest is both discriminatory against male surfers and unlawful according to California state law.

Taking action against female-only events is a bit of a pattern for Mr. Rava. In 2003, he made headlines for reportedly suing several bars in San Diego’s Gaslamp Quarter for denying him “Ladies Night” discounts. And in 2017, he sued comedian Iliza Shlesinger for her “Girls Night In” show in Los Angeles. Now, he claims to represent “several clients, male and female, regarding the upcoming Supergirl Surf Pro.”

“It is especially troubling that the City of Oceanside, in the year 2019, in the progressive State of California, would host and permit an event such as this that does not allow African-American men, Asian-American men, Latinos and other People of Color, gay and transgender men, and Jewish and Muslim men to compete, win cash prizes, and earn WSL points in a sport played by all,” he writes.

Currently, the WSL Qualifying Series includes 62 events for men compared to 42 for women.

In his letter, Mr. Rava references the Jack’s Surfboards Pro, which recently came under fire for not being open to women, as a pretense for he and his clients’ call to open the Supergirl Pro up to men. He claims that both events stand in violation of the Unruh Civil Rights Act, which prohibits businesses from denying people “equal accommodations” regardless of sex, race, color, religion, sexual orientation, ancestry, etc.

“The organizer for the Jack’s Surfboards Pro, which is a hopefully, formerly no-women-allowed WSL-controlled event… is seriously considering ending its ban on female surfers,” says Mr. Rava.

The Unruh Civil Rights Act is the same piece of legislation upon which the Committee for Equity in Women’s Surfing built its case for equal pay at Maverick’s last year. It led the California Coastal Commission to incorporate language about equal pay and representation into its permit process for sporting events. A few months later, the World Surf League announced it would institute equal pay across the board, though the League continues to deny any correlation between the fight at Maverick’s and its equal pay decision.

That fight is also what inspired a California state legislator to introduce a bill aiming to codify equal pay between men and women in sporting events held on California state lands. Early supporters of the “Equal Pay for Equal Play” bill (or AB 467), though, have recently split with lawmakers over the issue of equal inclusion at events – namely men and women-only events like the Jack’s Surfboards Pro and Supergirl Pro. It’s that legitimate, highly nuanced debate that Mr. Rava exploits in his letter that’s nothing short of provocative.

On one hand, activists like CEWS co-founder Sabrina Brennan argue that opening up all surf contests in California to everyone would have a greater long-term impact, giving even more competitive opportunities to women at the expense of all-female events like the Supergirl Surf Pro. As such, CEWS and others argue AB 467 be amended to include language on equal inclusion, which in its present form it does not address. On the other hand, female-only event organizers say the cost of doing away with the few spaces women have been able to carve out for themselves in a historically male-dominant space is too much to bear.

In a May 6 phone call with Assemblymember Tasha Boerner-Horvath, who authored AB 467, she told me that inclusion is certainly important, but that’s not the focus of her legislation.

“My bill has always been about pay equity and that’s the focus of it,” she said. “I think there are folks that want to deal with the broader aspects of women’s equality and… I think there’s a place for that discussion that’s not part of AB 467.”

Boerner-Horvath told CalMatters back in March that she believes equal inclusion will happen as a result of equal pay. “My strong feeling is that when we compensate women equally, that will translate into greater equality and inclusion across the board,” she said.

But, in a June 4 letter to the California Senate Natural Resources and Water Committee, CEWS alleged that in its current form AB 467 doesn’t go far enough.

“AB 467 does not protect athletes from gender-based discrimination in athletic competitions held on state lands,” the letter explains.

Activists like Brennan and fellow CEWS founding member Bianca Valenti say they are open to allowing men to compete in all-women events if that’s what it takes to achieve equality across the board.

“If you look at the number of events available to boys and men there are many more than are available to women,” Valenti told CalMatters in March. “If you want to preserve those women-only events you would be losing out on being able to participate in so many more.”

Still, Mr. Rava’s allegation that events like the Supergirl Surf Pro discriminate against men is a tough sell. Female professional surfers have long been paid less than their male counterparts and women have historically been afforded fewer opportunities to compete – two facts the letter references in a roundabout effort to argue men are the victims of discrimination here.

Organizers of the Supergirl Pro did not immediately respond to The Inertia‘s request for comment.