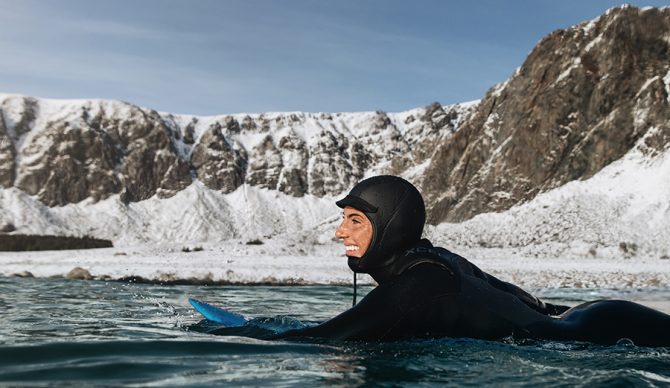 “We pulled up in the middle of a snowstorm and the left was properly barreling down the point,” Sage Erickson told me. “It was nowhere near the novelty wave I thought it was.”

Erickson had traveled to Unstad in Norway’s Lofoten Islands. And she wasn’t alone. In fact, for a very short time in early April, the crescent-shaped bay facing west into the Norwegian Sea was the center of the surfing world. Erickson had buddied up with Craig Anderson as part of a shoot for Norwegian luggage brand Db.

Their trip came hot on the heels of a Billabong shoot which saw Ryan Callinan, Griffin Colapinto, Ethan Ewing, Luana Silva, Laura Enever, and Isabella Nichols all head to 63 degrees north, deep in the Arctic Circle.

The Lofoten Islands, and more specifically Unstad Bay, has become the poster boy, or girl, for all things cold-water surfing. The waves were first surfed in the mid-1960s, but it was Kristian Breivik who rediscovered the bay after traveling up from the south of Norway in the 1990s. Access was made much easier in 1995, when a new tunnel opened up the village in the bay, population 14, to the wider world.

In 1999, UK surfers Sam Lamiroy and Spencer Hargraves were the first pros to make the trip, while filming for their surf movie E2K. More surfers arrived in the noughties, and Unstad Camping, the forerunner to what is now Unstad Arctic Surf, set up in 2003. 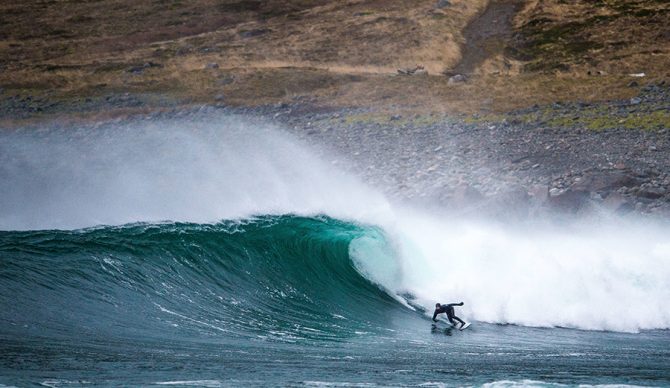 In the past decade, though, that the trickle of Norwegians and international pros has became a stream. With cold-water surfing becoming a thing, brands were attracted by the natural amphitheater which was framed by a left and right at opposite ends of the bay with a backdrop of snow-capped mountains cut by ice-blue fjords. Add the promise of a luminous emerald in the sky courtesy of the Northern Lights, and it became the go-to studio set for flogging wetsuits and “adventure wear.”

In terms of exposure, the high point came in 2017 when Mick Fanning turned up in Unstad the year after he had retired from the circuit. He stayed for 10 days, scored waves most days, and surfed the right under the Northern Lights two hours past midnight. The resulting images, understandably, went viral.

“My friend Willy said it best when he said, ‘if you didn’t know the planet was round, you’d think you were on the edge of the Earth,’” said Erickson. “Everything was so vast and extreme and I’d never seen such mountains and snow so close to the ocean. It’s a sensory overload. But the wave was hollow and had power, and you could see the true potential.”

Erickson had first surfed Umstad Left, the inside wave that can run for a few hundred yards close to the rocks on the southern side of the bay. The week before Callinan and the Billabong crew had surfed the left further out known as Garbage Dumps. That there is an actual garbage dump near the wave often doesn’t get a mention in the brochures.

“The locals said usually it needs a bit more size to break,” said Callinan. “But it was super rippable at four to six feet, at double that size it would be a pretty epic wave.” While it’s rare to get the long period, six-to-eight feet southwest swell that Garbage Dumps needs, when it does it provides a bona fide challenging left that can run for 300 yards.

However, it is the “Right” on the other side of the bay that has made the Lofoten Islands a household name in surfing. “It can run for up to 300 yards, holds eight feet easily, and offers both hollow sections and rippable pockets,” says Aussie ripper Wes Schaftenaar, who makes the 10-hour journey up from his home in Oslo when the forecast promises a solid northwest swell. “On its day the comparisons to J-Bay aren’t totally far-fetched.”

And if it seems that we may be building a solid case that Unstad is more than just a winter ad campaign backdrop, it’s worth mentioning the cold, the dark, and the inconsistency. 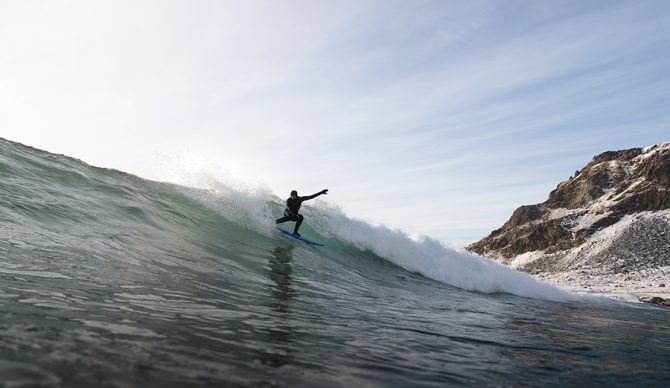 “It’s great that people are visiting Lofoten and Unstad. But it’s a fact that there’s a limited number of waves,” said pioneer Tommy Olsen. “In a bad year with crappy surf and only a few good days and huge crowds, it is not very pleasant.”

Both the right and left are also sand-dependent, something that is not always obvious in the snow-capped line-up shots. The Right for example has been plagued by a gutter running along the rocks for the last two prime winter and fall seasons, right in the place where the waves should be rifling along the shallow sandbanks.

And yet, for anyone who has visited and surfed the gem of the Arctic, the quality of waves, is perhaps irrelevant. “I’ll always remember the second day, and it was just a beautiful afternoon with the sun out, and snow on the ground and lefts running down the point,” said Craig Anderson. “After a surf, I came in and it was warm and sunny with this most beautiful light. It felt pretty magical.”

Even if the waves are a novelty, that novelty doesn’t seem like it will wear off any time soon.