The Coast Guard Rescued Me Beneath the Golden Gate Bridge; Here’s What I Learned 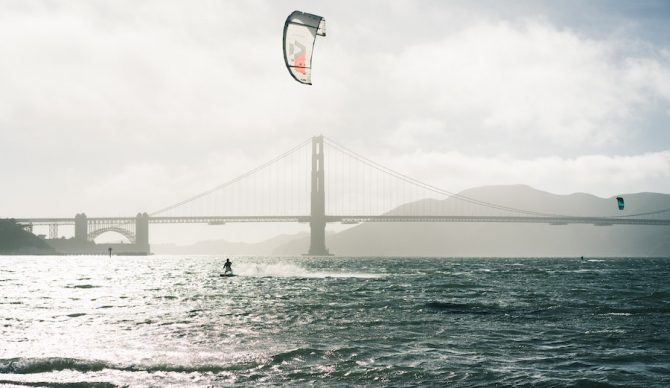 The scene at Crissy Field is a motley crew of kiteboarders, wing foilers, and windsurfers, brought together by some of the best wind in the Bay Area. Photo: John Moeses Bauan.

In the shadow of the Golden Gate Bridge, I “jibed,” turning downwind and pointing my board back towards San Francisco. Coming out of the turn on my toeside, I hopped, changing to my “switch” stance and setting my decrepit 3.5 meter wing on the steepest angle it could manage across the face of the wind.

The wing in my hands was barely useable after having been passed down through the pre-owned gear market from its original owner (who hadn’t treated it kindly), to another intermediate winger and then on to me. Two large repairs to the canopy, and a sun-weathered canvas with fraying seams should have alerted me to its tenuous lifespan, but being a month or less into the sport of wing foiling, I hadn’t a clue. Now, two months of near daily use later, it was not in great shape.

As I hauled on the handles to achieve a steeper upwind angle, I heard an unfamiliar popping sound and looked up to see a bubble the size of two fists emerging from the center strut where my handles attached. For a moment, I had the unique sensation of waiting for one’s fate – knowing that I was about to be fucked with nothing I could do about it. A few seconds later, BOOM. The bladder burst, air rushed out of the wing. I lost power, flopping into the water.

The area of the San Francisco Bay just inside the Golden Gate Bridge is a gnarly one. There’s ripping wind almost every afternoon, but this late in the season it can turn off like a tap. Fog can appear out of nowhere and blanket the area in a matter of minutes. And the current is a pain in the ass. On a flood (tide coming in) it’s bad for beginners, carrying them downwind as they struggle to learn to stay upwind. On an ebb (tide going out) it’s a liability for advanced kiters or wingers who like to play up near the bridge. 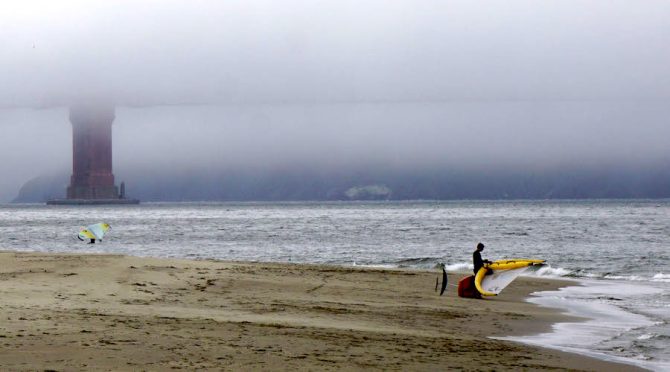 Fog can blanket the area in a matter of minutes. Photo: WS.

The tide that afternoon was on an ebb, meaning I could either paddle as hard as I could for shore and hope I made it before getting swept into the Pacific Ocean, or I could call in a rescue. (I’ve since learned that paddling directly for shore is not the correct way to paddle in on an ebb tide at Crissy Field. See here.)

I started paddling, but quickly realized my chances of making it to Fort Point were slim. So I used my cell phone to dial the Coast Guard dispatch, who put out the “winger in distress” call to any available boats. Initially, my lack of a radio caused some confusion over my location and who was going to come rescue me. But a fellow winger stopped his fun to sit with me and use his radio to help guide the responding boat (thank you, David). That boat was the Marin County Sheriff, and five minutes later I was aboard the craft headed back to Crissy.

The first thing I learned from the experience is that old gear is always ready to die. Mine had burst a seam, allowing the thin plastic bladder of the wing inside to bubble out and explode. I’ve learned a lot in the few months I’ve been wing foiling at Crissy Field, but this was new to me. Especially coming from surfing where old gear is sort of the norm to learn on. The second thing I learned is that a marine radio is far better than a phone. Why? Because a radio has better coverage than a cell phone, lets you communicate directly with rescuers and is fully waterproof. Funny enough, I had just received a radio in the mail that day, but with limited pocket space, chose to take my phone instead so I could listen to music. From now on, if I ever have to make that choice, I’m choosing the radio. The third thing is that rescues happen, a lot.

Back on shore, I was greeted with a strange sense of camaraderie from my fellow Crissy Field wingers. I was assuming that getting rescued was a bit of a shameful experience. A “sorry guys, I fucked up, won’t happen again,” sort of vibe. Far from it. “Happens to everyone at least once,” I was told. “Good to get the first one under your belt and out of the way.” Or, “Happens all the time. That’s why you carry a radio!”

Without much of a background in windsports, the somewhat blithe attitude towards being rescued struck me as a little insane. Perhaps it’s just my lack of experience, but something feels wrong about relying on emergency services for such non-emergencies. Sure, as normal human beings we rely on emergency services all the time to respond if we need help, say if we get injured on a hike, but rarely is basically dialing 911 such a run-of-the-mill occurrence. 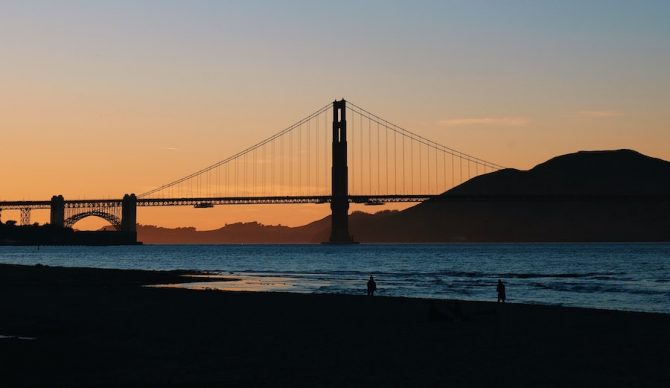 The extreme natural beauty can get a little mind-numbing at times. Photo: Haotian Zheng.

And furthermore, a popped wing is hardly the only way to get stranded. The winds at Crissy are often strong, allowing wingers, windsurfers, and kiters to use smaller, more nimble equipment. But if the wind dies, or even just cranks down a few notches, once again you’re stranded and need a ride in. In fact, that happened just the other day, leaving two wingers to paddle back in from over a mile off shore, and re-igniting the conversation about safety and emergency services on our Facebook page. And for us wing foilers, there’s always the chance a bad fall will lead to your foil encountering your wing, leading to a punctured canopy, or worse, a popped bladder, which as I learned is no fun at all.

That knowledge of being able to rely on a rescue on demand, and basically 24-7, lets us push the limits at Crissy Field, taking out smaller wings or boards despite a shifty wind forecast, or try potentially equipment-damaging maneuvers far from shore. However, it feels privileged to go out with the attitude of, “I’ll just get rescued if something happens.” Emergency services shouldn’t be our first line of defense. To be fair, the emergency services themselves don’t seem too put out by our mini rescues. “This has got to be such a pain in the ass for you guys huh?” I asked the officer in the back of the boat with me as we sped back to Crissy. “Happens all the time,” he said. “It’s basically what we’re here for.”

All that being said, I don’t want to rag on the windsports scene at Crissy. This is not a whistle-blowing article, as the problem is well-known and conversations about how to mitigate our strain on emergency services are ongoing. However, the problem is sure to get worse before it gets better as foiling injects a new level of interest in wind pursuits from the greater outdoors community, myself as a prime example. The wind community at Crissy is a stellar one. Friendly, welcoming to beginners, and always ready with a tip (or a beer) post-session. There’s got to be a way to harness that community energy to come up with a better solution to the problem of getting stranded.