The Fish Shape, Its Unorthodox History, and What It’s Meant to Surfing 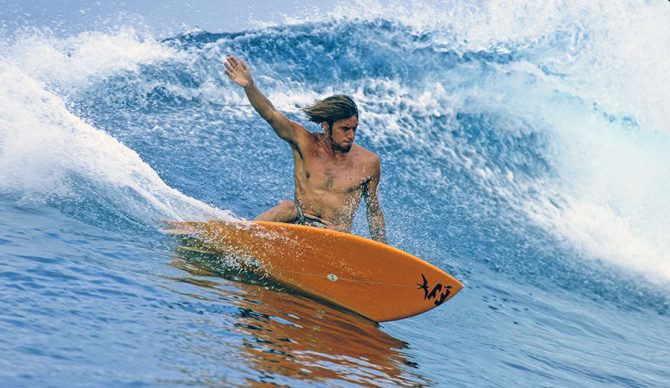 Editor’s Note: Welcome to Surf History 101, where we look at innovations in the world of surfing and beyond that changed the pursuit forever. In this edition, Sam George examines the Fish shape and how it has impacted wave riding.

The Fish is a short, wide, twin-pinned, twin-finned surfboard that, although first ridden as a kneeboard, has over the past two decades become the darling of “alternate” board design devotees the world over.

In the late 1960s, during the violent throes of the “Shortboard Revolution,” a vast majority of surfers suffered from what surfer/shaper Dave Parmenter called, “a glide-deficient diet.” In the quest for improved maneuverability, surfboards had shrunk in length, width, and thickness so abruptly that little thought was given to what was being lost in the process. This downward trend saw even many of the world’s best surfers struggling to make their fiberglass toothpicks work in anything but the fastest, hollowest waves.

Not San Diego’s Steve Lis. An enthusiastic paipo board rider, Lis was “prone to the bone” throughout much of his early years, adapting his flippered approach to the high quality waves found along Point Loma’s Sunset Cliffs region. During one particularly strong swell in 1967, he and a buddy found an abandoned longboard that had been washed up into a cliff side cave. The industrious pair retrieved it, carried it home, cut it in half and stripped the glass. Fortuitously, (so far as future generations of Fish riders are concerned) Lis took the nose section. This he fashioned into a kneeboard, and the appropriate term is “game changer.”

Taking advantage of his new board’s wide, flat planing surface to find speed where conventional surfboards bogged, along with torque applied from his kneeling position, Lis developed a powerful style of pocket surfing that was years ahead of the curve, drawing Slater lines long before Slater was born. The twin, wide-based keel fins he added to his later knee machines only helped drive this innovation. But his big breakthrough, occurring right around 1970, was simplicity itself. Riding pintails at the time, Lis often found that his flippers, hanging off the tail, caused more drag than he liked. To remedy this problem Lis laid a piece of butcher paper on the ground, kneeled on it while wearing his flippers, and traced their outline. The resulting tail dimension was incorporated into his next shape, creating the wide nose, somewhat parallel-railed outline most surfers associate with the Fish design. 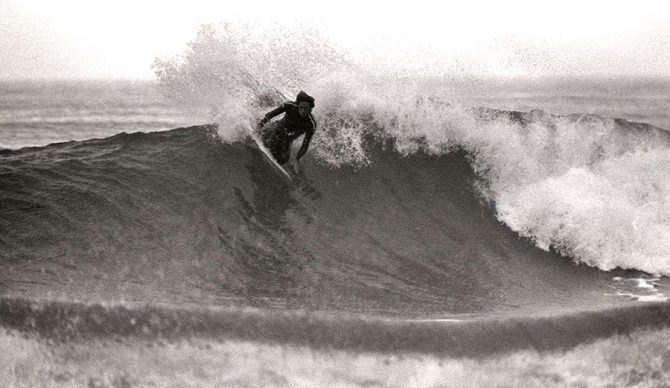 At 4’6” and 21-inches wide, with a 13 ½-inch tail, one thing was still missing — or would be. Deeming the tail too wide, Lis cut out a portion between corners, thus reducing the surface area while inadvertently creating the distinctive, twin-tailed look that would eventually define the design. On this singular species Lis’ performances in and around his Sunset Cliff home waters became so advanced that it was inevitable his upright brethren would beg him for a ride. One of these was Jeff Ching, a young Hawaiian surfer attending San Diego State. So startled was he by the speed of Lis’ little board, and its ability to carry that speed throughout flat spots and hollow tubes alike, that he immediately ordered a stand-up version. Lis consented, scaling up the dimensions of his magic 4’6” (which Ching had dubbed “The Fish”) in length and volume to a more reasonable 5’1” that Ching could ride standing. And the rest, as they say…

Beyond its role in the retro renaissance, the influence of the Fish on both modern surfboard design and contemporary surfing performance is rarely acknowledged and even less understood. One reason stems from its spawning grounds: the fiercely localized confines of the Sunset Cliffs reefs, a veritable black hole of surf imagery and perception. Not that its denizens didn’t want credit for their hometown hero — or at least his board.

During the 1972 World Contest, the finals being held at Ocean Beach, so incensed were local Fishmongers that Huntington Beach’s David Nuuhiwa was depicted in a Dyno Surfboards ad as the design’s progenitor, that they stole the Orange County version Nuuhiwa was riding and hung it in effigy from the OB Pier, “Good Luck Dave” scrawled across its ravaged deck. The irony, of course, is that Hawaii’s Jim Blears won the event on a Fish — borrowed wisely from an OB local. But other than this sordid blip on the radar and low-profile endorsements from high profile figures like Skip Frye, Mike Tabeling and Bunker Spreckles, the Fish developed in relative obscurity, never really catching on as a legitimate trend.

But it was still a major influencer. In 1976 Hawaii’s Reno Abellira shaped himself a 6’2″ winged Fish and brought it with him on the Australian leg of the IPS World Tour. At the Coca-Cola Classic, held in amazingly similar conditions to those at the 1972 World Contest (dribbling beach break) Abellira broke out the Fish and reaped many of the benefits as did the winner of the San Diego event: unmatched speed and flow in waves on which surfers riding conventional equipment struggled for trim.

One of the surfers who took particular notice of Abellira’s small-wave flow was young Mark Richards from Newcastle, who at the time was riding single-fin Aipa Stings. Intrigued with the twin-fin’s potential, and working with venerable shaper/designer Dick Brewer, Richards reconfigured the Fish into what might be called the modern twin-fin: narrow nose, winged swallowtail with canted, flat-side foiled, high-aspect fins. This hybrid design represented the quantum leap that earned Richards four consecutive World Titles, taking high-performance surfing in a completely different direction than might have resulted from five more years of wing-pin, single-fin riding. Keep in mind that Simon Anderson designed the Thruster as an answer to the qualities of Richards’ twins. And we all know how far that particular innovation has brought us. All thanks to the humble Fish from Sunset Cliffs.

From Derek Hynd and Tom Curren in the 1990s to Rob Machado and Torren Martyn today, enough prominent surfers have added a Fish to their quiver that the design is more popular today and prevalent than ever before. They’ve become, in many lineups, the go-to board for those expanding their repertoire beyond longboarding. All for the same reason that excited Steve Lis and his Fish fans back in the day: they’re so damn fun to ride.